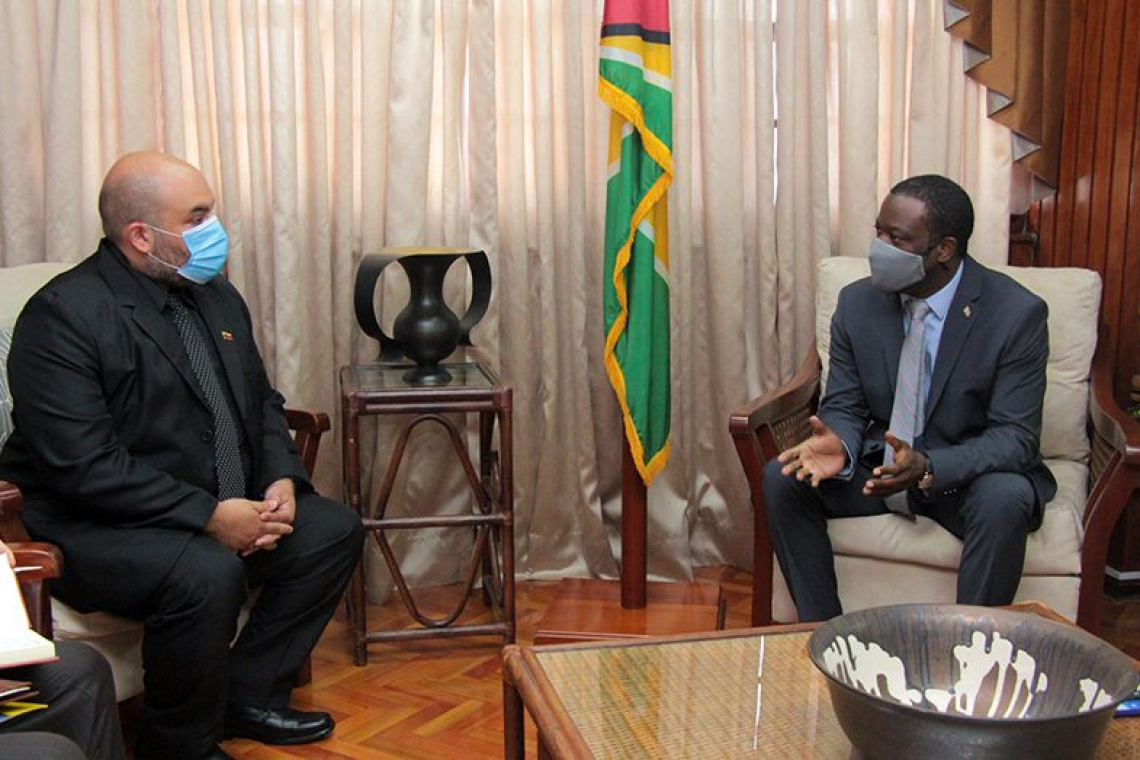 Minister of Foreign Affairs, Hugh Todd registering Guyana’s strong objection to Venezuela’s latest claim to the coast west of the Essequibo River, during a meeting with Chargé d’Affaires of the Venezuelan Embassy, Moses Chavez. Photo credit: Ministry of Foreign Affairs and International Cooperation.

GEORGETOWN, Guyana--Venezuela’s recent claims to the seas and seabed adjacent to the coast west of the Essequibo River, which belong to Guyana, continue to receive strong condemnation from local and foreign stakeholders, with the parliamentary Sectoral Committee on Foreign Relations and Canada being the latest to add their voice to this matter.

The parliamentary committee, according to a statement on Monday, unanimously condemned in the strongest terms the implementation of any law by Venezuela with extra-territorial application in contravention of international law and the rights of Guyana.

This position was adopted by the committee, which is chaired by opposition parliamentarian Raphael Trotman, after its members were briefed on the matter by Foreign Affairs and International Cooperation Minister Hugh Todd.

The meeting was attended by Prime Minister, Retired Brigadier Mark Phillips; Minister of Governance and Parliamentary Affairs, Gail Teixeira; and other members of the government and opposition sides of the House.

Minister Todd, after entertaining several questions from the parliamentary committee, was told that there is need for continued vigilance in safeguarding the sovereignty and territorial integrity of Guyana.

The committee further assured the minister of its support of efforts of the government of Guyana to take all necessary actions to safeguard the national interests of this nation.

“Guyana stands united and resolute in the protection of our sovereignty and territorial integrity,” the parliamentary committee said in its statement.

The “unity” at reference was also conveyed by Minister Todd to Chargé d’Affaires of the Venezuelan Embassy, Moses Chavez, during a meeting on Monday.

Minister Todd registered Guyana’s strong objection to Venezuela’s latest claim to the coast west of the Essequibo River, noting that this was based solely on unilateral action, and without due regard for international law and the rights of Guyana.

This is precisely the issue that is before the International Court of Justice (ICJ), and which, on December 18, 2020, the ICJ decided to resolve, that is, whether Guyana or Venezuela has sovereignty over that territory.

Canada has joined the US in calling on Venezuela to respect this judicial process.

The Canadian High Commission, in a statement posted on its Facebook page on Monday, stated that Venezuela’s recent claim that it has sovereignty over the area adjacent to Guyana’s Essequibo coast is concerning.

“The decision is in the hands of the International Court of Justice, and this judicial process must be respected,” the high commission said.

Acting Assistant Secretary of the US Department of State’s Bureau of Western Hemisphere Affairs, Michael Kozak said Sunday that the US supports the ICJ’s ruling that it has jurisdiction in the Guyana-Venezuela territorial border issue, which is the legal and peaceful way forward.

“Maduro’s aggressive claims don’t change this; they only show the world his disregard for his neighbours and international law,” Kozak asserted in a post on his official Twitter page.

Also, US Ambassador to Guyana, Sarah-Ann Lynch reiterated the North American country’s call for a legal, peaceful resolution to the border controversy.

Guyana is confident that the international court will resolve the issue in its favour, and that this will also settle the issue of maritime rights in the adjacent sea and seabed.

“I remind that sovereignty over this coast, and the land territory to which it is attached, were awarded to Guyana (then British Guiana) in the 1899 Arbitral Award, whose validity and legally binding character Guyana is confident the International Court of Justice will uphold unequivocally,” President, Dr. Irfaan Ali affirmed in an address to the nation on Saturday.

He said that regrettably, by decreeing that the seas adjacent to this territory belong to Venezuela, at least two fundamental principles of international law have been violated.

In the first violation, as outlined by President Ali, no State can unilaterally determine its international boundaries, whether land or maritime.

“Therefore, this attempt by Venezuela to attempt, unilaterally, to fix both its land and maritime boundaries with Guyana is a legal nullity, which cannot and will not be respected by any other State in the world, including Guyana,” the head of state affirmed.

This means that sovereignty and sovereign rights in the sea and seabed emanate from title to the land that forms the coast to which those seas and seabed are adjacent.

Leader of the Opposition, Joseph Harmon, in a statement on Sunday, urged Venezuela to utilise the ICJ as the forum to present its case, and to cease and desist from issuing these arbitrary decrees.

“This decree is mischievous, illegal and can only serve to foment tensions on an issue that is being peaceably resolved in the International Court of Justice. Venezuela, as a Member State of the United Nations, is bound by the jurisdiction and rulings of the ICJ,” Harmon said in the statement.

The A Partnership for National Unity + Alliance For Change (APNU+AFC) Coalition, he avowed, stands resolute and in solidarity with any reasonable action that the people of Guyana are likely to embark on to safeguard Guyana’s sovereignty.

Renowned Guyana-born diplomat Sir Ronald Sanders has said, too, that violations of international law will not be tolerated by the international community.

While this decree is yet to be gazetted or elaborated on, Sir Ronald said: “What they put out informally is quite troubling, and it points to violations of international law. But, one has to wait to see how far they are going before you make a strong statement on this.” ~ Guyana Chronicle ~