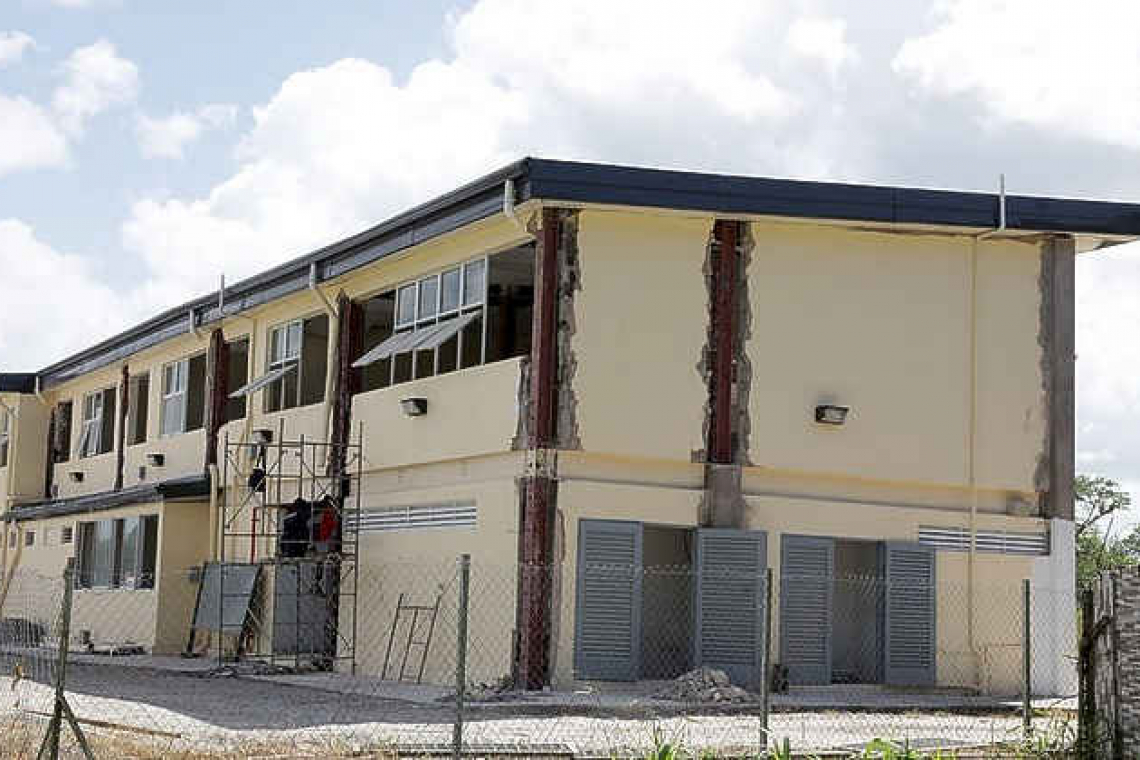 ~ After memo for rotational classes ~

SANTA FLORA, Trinidad--Days after receiving notice from the Ministry of Education that they should send their children to school on a rotational basis, parents of pupils attending the Santa Flora Government Primary School staged a placard protest on Wednesday.

The parents said for the past eight years they have been suffering, as pupils have been attending classes in two decanted buildings owned by Heritage Petroleum in a remote part of Beach Road, Santa Flora.

Their new school has been under construction since 2014 and is 85 per cent complete.

President of the Parent Teachers Association (PTA) Roger Bradshaw said the Beach Road facility is not fit for occupation, noting that 232 pupils were forced to use one bathroom.

“There is no cell phone signal there and the road leading to the school is deplorable. Parents have to pay more to send their children to that location. We have had enough,” Bradshaw said.

PTA secretary Sarah Gopaul said last Friday, parents received a memo from the ministry requesting that pupils report for classes on a rotational basis, but she said they were not in favour of this.

“Is it too much to ask for eight weeks of online teaching to ensure the safety of our children? At the beach camp facility, there is no sick bay. There is a room infested with rats and junk material stored by Petrotrin. It’s called a rat room. There is no ventilation. There are transportation issues, bad roads, crime and this is why we decided we are withholding our children until the ministry can ensure they are in a safe and secure environment,” she explained.

Noting that the ministry had a duty of care for the pupils, Gopaul said following a meeting two weeks ago, the ministry promised to clean the room and provide a tent as a sickbay but none of this ever materialised.

“That building was not designed to be a school. That used to be one of Petrotrin’s facilities and was used as a carpenter shop. It only has one bathroom for 250 children. That is unacceptable and it is not safe,” Thomas-Flanders said.

Parent Mindy Flanders also said there are no play areas.

“There is no proper ventilation. Students are suffering from claustrophobia and some have comorbidities. They cannot afford to be in that environment with COVID being all around us. When the students were there before, some of them had skin rashes and children were coming down with cough and flu. They were crammed in this building and don’t have space to play,” she said.

“Standard Five pupils were located there as recently as February-March 2022. There were no complaints from the parents at that time. The building the school presently occupies has windows and was also outfitted with [air-conditioning – Ed.] AC units some years back at the request of the parents, who complained of the heat,” she explained.

The minister said there have been no reports of any children falling sick.

“The school was visited by [Ministry of Education] MoE officials as recently as two weeks ago and is fit and ready for occupation,” she said.

She noted that the Public Transport Service Corporation (PTSC) service and school feeding are on standby for implementation.

Asked if online classes will be considered, Dr. Gadsby-Dolly said: “There is no justification for online operation at this school, as that modality is only approved if a school cannot be physically used at any time – usually for very short periods while repairs are effected.” ~ Trinidad and Tobago Guardian ~