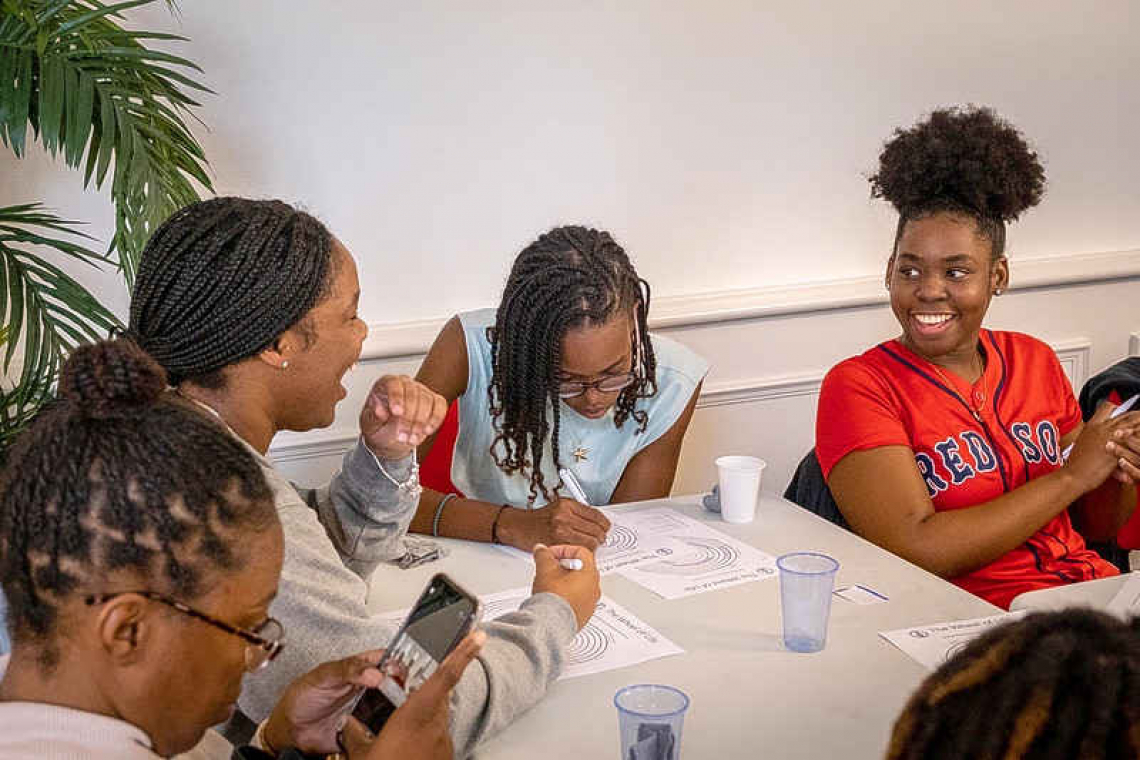 A group of the new batch of St. Maarten students during the workshop at the Cabinet of the Minister Plenipotentiary in The Hague. (Photo by Yannick Mardenborough)

Engaged students during the workshop with at left, co-facilitator Edwina Hodge of Unified St. Maarten Connection. (Photo by Yannick Mardenborough)

THE HAGUE--The Cabinet of the St. Maarten Minister Plenipotentiary in The Hague hosted an event for the new St. Maarten students last Saturday as part of the Orientation Programme that assists the students in getting settled and to equip them with the tools that they need for a well-balanced life in the Netherlands.

At the request of the student guidance counsellors for the St. Maarten study financing recipients, the Unified St. Maarten Connection (USC) was invited to run a workshop titled the “Wheel of Life”, tailored to help each student design their path to success in the Netherlands.

The workshop, co-facilitated by Nikita Udhwani and Edwina Hodge of the USC Board, gave the students a safe space to visually reflect on their first few weeks in the Netherlands and self-assess their current life and compare it with the way they would like it to be. The workshop “Wheel of Life” was the official workshop to kick off a series of workshops that has been planned for this academic year.

The event started off with words of prayer by coordinator Clara James-Browne. After giving reverence to the Highest, St. Maarten Minister of Education Rodolphe Samuel shared words of encouragement with the students via a live webcast. He reiterated the importance of learning the Dutch language, integrating in the Netherlands and doing their best at school. He urged them to never to give up.

Engaged students during the workshop with at left, co-facilitator Edwina Hodge of Unified St. Maarten Connection. (Photo by Yannick Mardenborough) 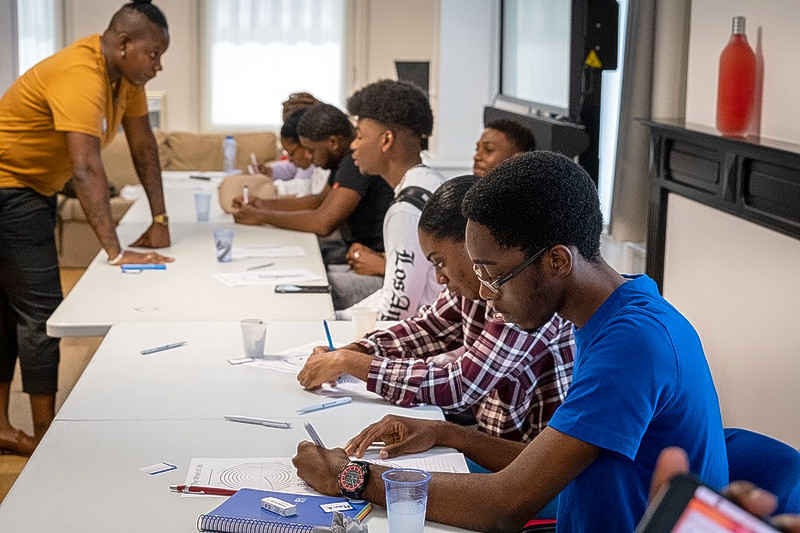 The students received welcoming and inspirational messages from three other speakers who had come to the St. Maarten House: St. Maarten Minister Plenipotentiary Rene Violenus, Member of the Council of State of the Kingdom Maria Christina van der Sluijs-Plantz and Member of the Second Chamber of the Dutch Parliament Jorien Wuite.

Minister Violenus spoke about “hitting the mark”, about achieving goals and being successful. “You came to the Netherlands with a goal. There will be challenges on your path which will test your resilience and determination to succeed. These challenges will form you and assist you in hitting the mark. They may cause tears and frustration, but know that it is worth it.”

Violenus said it was important for the students to stay close to who they are as a person and not forget their identity, their culture and the valuable contributions that they bring to the table. He called on the students to dare to believe in their resilience, to be respectful of time – “both your time and of others,” and dare to communicate and engage with others outside their direct circle of friends.

Van der Sluijs-Plantz welcomed the students to the next step of building their future, of taking responsibility for their own destiny and being prepared to be accountable first and foremost to themselves. “You had the courage to leave our sweet St. Maarten land to pursue further knowledge, experience and personal independence to become the best you can be. I salute you.” She also praised “those who had the courage to let go, to allow you to grow to your full potential in a country far from home.”

Van der Sluijs-Plantz called the students ambassadors for St. Maarten. “I urge you to be aware of that, and to wear that badge with honour. Because, being a St. Maartener means that, regardless of the fact that we have a long way to go, and that change will have to come, we have a lot to be proud of: our beautiful island, friendly island, welcoming island, our resilient people. We can be proud of our talent to live, love, laugh, party and bring the vibe. We have something to contribute!”

Member of Parliament (MP) Wuite said that the students had come to the Netherlands in the critical years of their personal formation. “You move far away from your country of birth during this critical period. You might feel that this society is not for me. But you are part! I want you to feel part of this society. Participate to the max.”

Wuite urged the students to express themselves beyond their primary purpose of studying. She told them that their identity matters in the Netherlands. She echoed the message of the earlier speakers to aim high, dare to dream, follow their aspiration and never give up. “Never feel that you cannot do it because of the characteristics of the Dutch society.”

USC Chairwoman Udhwani said in an invited comment after Saturday’s event that USC was delighted to facilitate this workshop for the 2021 students. “Students are better able to concentrate on their studies when other facets of their life, from their family to their finances and emotional well-being, are in balance. These unprecedented times have placed a toll on everyone’s mental health.”

USC appreciated that the Ministry of Education, Culture, Youth and Sport ECYS, which funded the workshop, and the student guidance counsellors recognised the need for supporting the students.

Udhwani said the students seemed very happy with the workshop. Some of the feedback from students included: “I had the opportunity to reflect, which I have not done in a while,” “I thought this was going to be a boring session, but it was much more interactive and introspective” and “This was fun; I liked the sharing of experiences with the group.”

USC will be running a follow-up workshop on November 6. USC members who supported the event, besides Hodge and Udhwani, were Siddarth Jethwani (media) and Yannick Mardenborough (photographer).