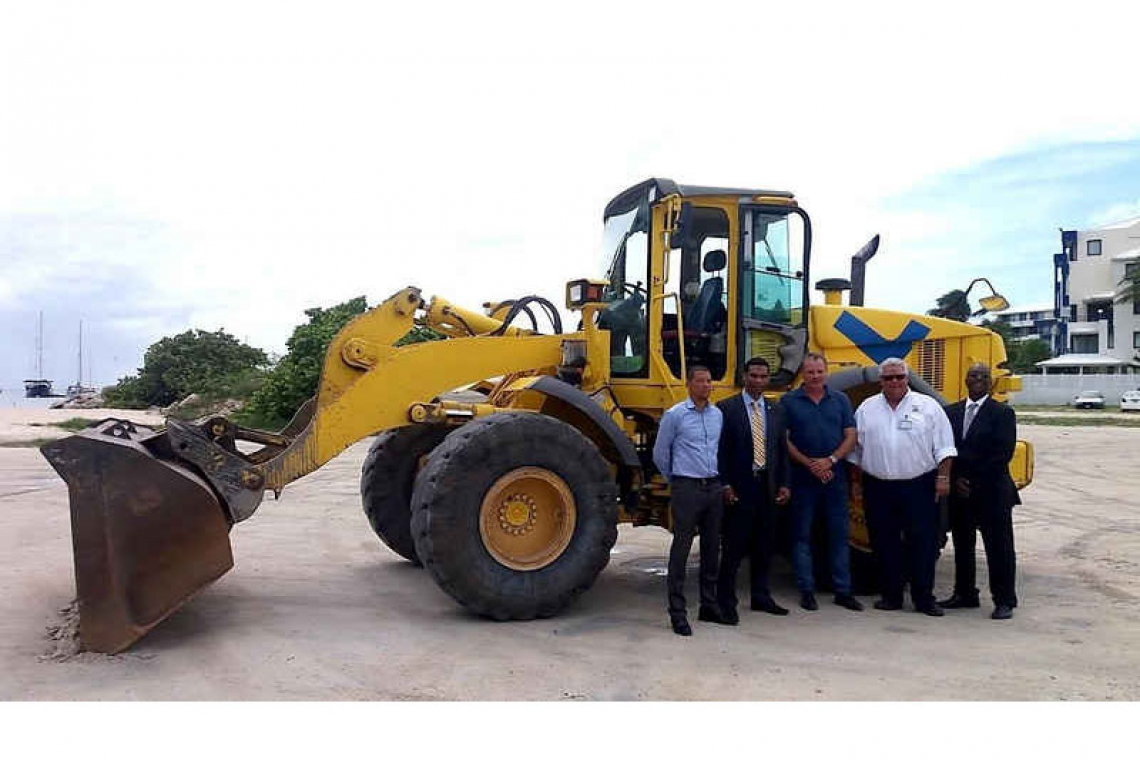 Suspect in the “Ruby” investigation, former Head of Infrastructure at the VROMI ministry and current Member of Parliament Claudius “Toontje” Buncamper (second right), with former VROMI minister Angel Meyers (second left), and former director of construction company Windward Roads Janhendrik Boekaar (centre) and others, during the ground-breaking ceremony for the Kim Sha parking lot in Simpson Bay, on May 16, 2016.

PHILIPSBURG--Current Member of Parliament (MP) Claudius “Toontje” Buncamper, his wife Maria Buncamper-Molanus, construction company Robelto and Sons and its directors R.B.F. and L.A.L.P. were in the Court of First Instance this week as suspects, following an extensive investigation into alleged criminal acts, including the tendering for management contracts of the St. Maarten sanitary landfill. The hearings in this case will continue November 15 and 16 with the prosecutor’s closing speech and lawyers’ pleadings.

The focus of the suspicion against Claudius Buncamper lies with corruption during his tenure as Head of Infrastructure at the Ministry of Public Housing, Spatial Planning, Environment and Infrastructure VROMI.

In particular, he is suspected of taking bribes, abuse of position, forgery, and the misuse of government funds for personal purposes. His wife is a co-suspect in accepting bribes. F. and P. are suspected of paying the bribes.

The so-called “Ruby” investigation started in July 2018 by the Kingdom Detective Cooperation Team RST under leadership of the Anti-Corruption Taskforce TBO. On February 12, 2021, the Joint Court of Justice allowed the prosecution of MP Buncamper.

Wednesday’s hearings in this case primarily focussed on two charges against Buncamper concerning abuse of his position in the awarding of a piece of land on Kim Sha beach to a bar/restaurant owned by his son and daughter, and the abuse of government funds for personal purposes.

Buncamper is charged with arranging a building- or rental permit for his children’s business, who wanted to move their establishment to Kim Sha at the time when construction of a parking lot with 175 parking spaces was in the planning.

Buncamper denied that he had interfered in any processes, stating that he did not hold any power over the issuance of business licences as these are at the sole discretion of the Ministry of Tourism, Economic Affairs, Transport and Telecommunication (TEATT).

However, he was involved in the tendering of the 3,561-square-metre parking lot, which was opened in November 2016. Initially, government sought to evict Ocean Explorers dive centre, operated by Go Dive St. Maarten NV, and Beach Bums Watersports NV from the premises to make room for the parking lot, but the court allowed these businesses to stay because government had failed to provide them with alternative locations.

He agreed that he had both personal and business involvement in this project, but said he had not used any “pressure” to bring this matter to an end. “On a small island it is common practice to address people you know in the government when you want to get something done,” Buncamper said.

Formal judicial policy advisor at VROMI and current Integrity Chamber official Alexis Schoormans, who was heard as a witness in this case on Monday, said it was “unacceptable” that Buncamper had interfered in his children’s “conflict” and that this constituted a conflict of interest.

Buncamper’s former superior at VROMI, then secretary-general Louis Brown, said he did not know if Buncamper had broken any rules in interfering on behalf of his family.

The court also discussed a number of invoices for construction work on behalf of Buncamper’s family or the Lions Club, of which he was an official. These invoices were allegedly paid from government funds.

Buncamper said he had permission from then prime minister William Marlin, who was also questioned as a witness earlier this week, to use monies from the provisional budget for sewage projects to pay for the reconstruction and extension of the Lions Den in Sucker Garden, because it also functions as a community centre and hurricane shelter.

Confronted with invoices for private work, such as the installation of security cameras and fencing, which were billed to construction company Windward Roads and which were also paid from the provisional budget, Buncamper said these were mistakenly taken for private work, or he said he could not remember that these invoices were made.

He said it was common practice to use monies from the provisional budget for non-sewage-related work at VROMI, and said there was no other way to quickly obtain money for unbudgeted expenses, because this first required a Parliament-approved budget amendment.

The invoices for non-sewage-related work were sent to Windward Roads, which has been responsible for management of the sewage plant for the past 21 years. These invoices were then made payable from the provisional budget.

“It is in the interest of St. Maarten society that there is clarity about the alleged corrupt and fraudulent conduct of a person who is part of the public administration,” the Prosecutor’s Office said Wednesday in a press release about this case.

“For a well-functioning democratic society, it is essential that residents have confidence in their government. Official corruption is a phenomenon with many manifestations and does mainly occur at the interface of public and private interests. Corruption can permanently disrupt a society. It damages the integrity of the government and leads to false competition. For those reasons, TBO takes signals of such corruption extremely seriously and, if necessary, has an in-depth investigation carried out,” the Prosecutor’s Office said.