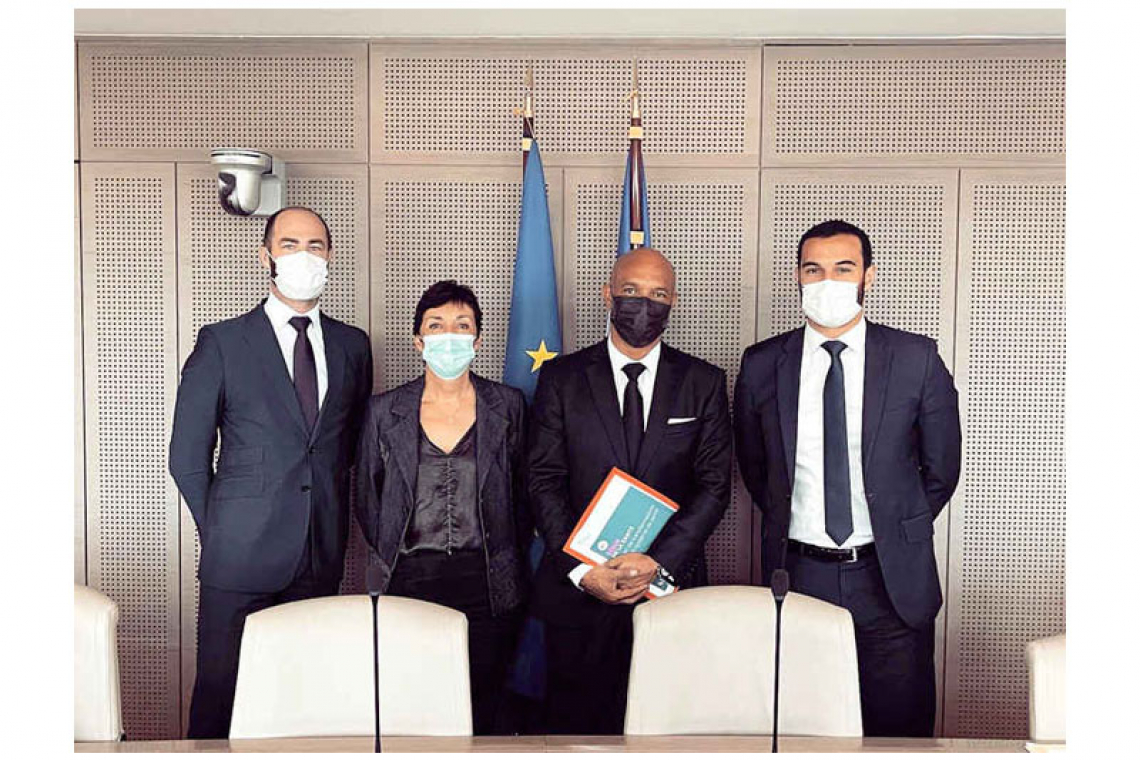 MARIGOT--President Daniel Gibbs met with the cabinet of Minister of Health Olivier Véran on Monday, September 27, where he pushed a significant need for investment in health facilities in St. Martin within the framework of state credits.

Gibbs was also in Paris to defend St. Martin’s interests in not only public health, but also social housing.

Arnaud Vanneste, adviser to the minister on healthcare provision and investment, and Liès Messafta, adviser in charge of relations with local elected officials and local authorities, have been mobilised to support St. Martin in its development of skills and healthcare facilities.

Within the framework of the “Ségur de la Santé” (the healthcare initiative is named after the street Ségur in Paris on which the health ministry is based), St. Martin must indeed strengthen its healthcare offer to meet the requirements of a geographically isolated establishment, it was noted. The aim is to guarantee the people of St. Martin the same level of care as that required in France, particularly in terms of access to care.

Within five to 10 years, the hospital must be able to have created five permanent intensive care beds; recentralised the medical-technical platform with the creation of an internal laboratory and an imaging platform (scanners, magnetic resonance imaging (MRI)) near the Emergency Room; developed space by occupying the current extension dedicated to day hospitalisation, i.e. eight beds; created a new, larger 12-bed Day Hospitalisation Unit with gastroenterology, neurology and geriatrics activities; developed outpatient consultations; and continued the re-organisation of the Emergency Room.

To respond to the recurrent problem of medical evacuations and to reduce the significant risk of loss of opportunity, the Northern Islands should be able to benefit from a helicopter and its heliport shared with other administrations (Sea Rescue, Civil Security, Gendarmerie, etc.). The overall investment requirement for these projects is 17.7 million euros.

In the afternoon Gibbs was invited to speak at the Union Sociale pour l’Habitat Outre-Mer (USHOM) symposium on the challenges of social housing in the French overseas territories, which was held at the Palais du Luxembourg (Senate).

He exposed the reality of issues that the territory of St. Martin has been facing for several years. The evolution of social housing is at the centre of economic issues and climate change. The objective for the Collectivité, he said, is to develop a social housing inventory that is dignified, secure, better integrated, better adapted to its environment, and which is also a driver of economic development.

The Collectivité is fully committed to a proactive approach, in particular through the upcoming development of Plan Local d’Habita (PLH). This programme will be part of the discussions that will be held with Agence Nationale pour le Rénovation Urbaine (ANRU), Agence Nationale pour l’Amélioration de l’Habitat (ANAH) and Action Logemen (AL). Agreements will be negotiated with these organisations in the coming months.

During his speech, Gibbs recalled the challenges facing the Collectivité of St. Martin with regard to the many competences acquired since 2007. He also mentioned the inconsistencies that arose during the transfer of competences by the State, particularly that of housing in 2012.

He said he was fully aware of these shortcomings and recalled the total lack of compensation by the State in 2012 for the transfer of competence for social housing and construction, resulting in a shortfall of about 15 million euros annually for the finances of the Collectivité over 10 years.

In this unprecedented context, Gibbs recalled the magnitude of the task to be accomplished because it is necessary simultaneously “to accept the past, following a massive and botched transfer of competences with consequences that were underestimated for a long time; to manage the present without statistical tools on which to rely; and to prepare the future of the territory in cooperation, planning and projection.”