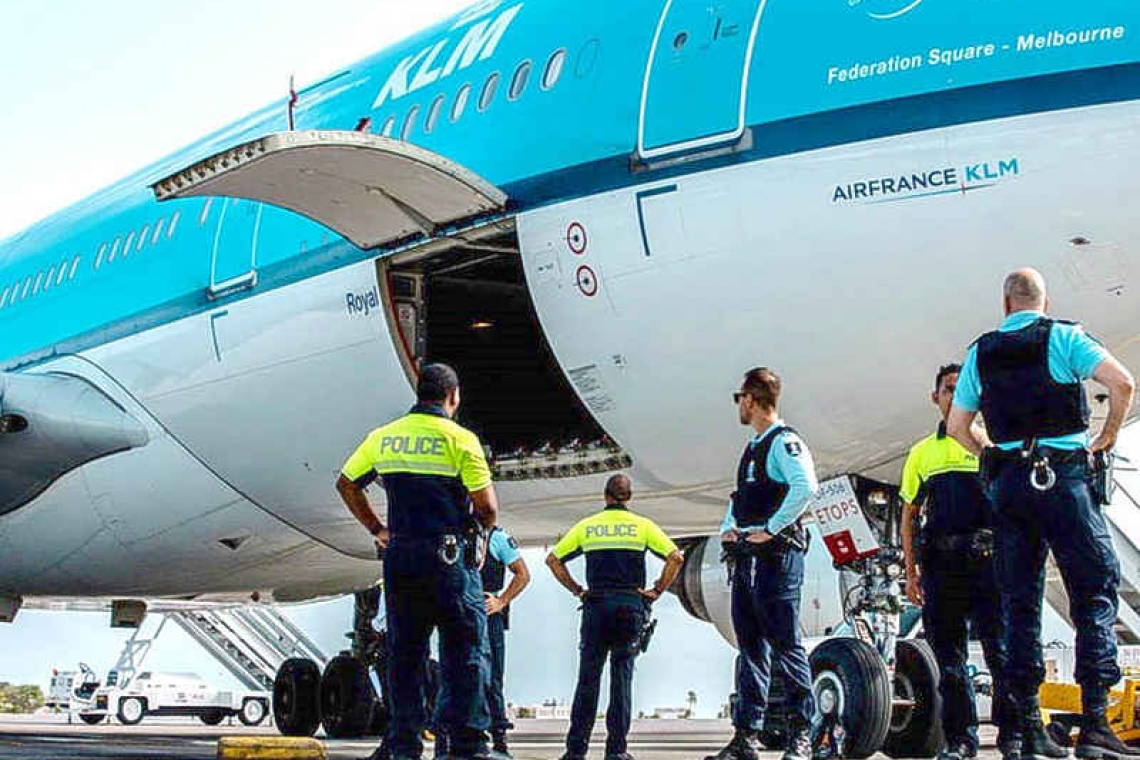 Investigative officers of the KMar support the police during checks at the airport. (photo KMar)

A first group of more than 30 colleagues has already started this month, in anticipation of the official reorganization that should lead to permanent placements from July 2023, the report stated.
According to Majoor Jan Ploegstra, the project leader, this is a project with a lot of impact. In the magazine of the Royal Netherlands Marechaussee (KMar) he explains that the protocol on strengthening border control in the Caribbean countries of the Kingdom was signed last year by the responsible ministers from the Netherlands and the countries Aruba, Curaçao and St. Maarten.
“The three countries have expressed the wish to cooperate more intensively, including with the KMar, Dutch Customs and the Caribbean Coastguard, in the fight against cross-border crime in order to be better protected,” Ploegstra said. “Think, for example, of tackling human smuggling, human trafficking, drug smuggling and illegal migration. Each country has drawn up a plan to jointly invest in border control and police service at airports and maritime border surveillance.”
Ultimately, 31 jobs will be added on Curaçao, 29 on Aruba and 11 on St. Maarten. The protocol has been concluded for 7 years with options for extension.
“The countries’ action plans focus on the first three years,” said Ploegstra. “In the coming years, a kind of follow-up plan will be made for the years after that.”
The KMar has been supporting the local services in Curaçao and St. Maarten for some time through the Flexpool KMar protocol, which provides for approximately 20 colleagues per country.
The new colleagues are mainly used for surveillance at air and maritime borders, Ploegstra said. “This concerns border-related functions in the domain: enforcement, investigation and intelligence. These include investigative officers in border control and in the police department at the airports, intel employees, detectives, colleagues with a focus on training and guidance, managers, analysts and specialists for counterfeit desks to be set up.”
In the run-up to this project, the KMar sat down with all organizations active in border control, Ploegstra explained. “We have worked closely together to make this possible: a huge number of people are involved. A major advantage of this project already is that it has created a stronger focus on a chain approach within the countries of working at the border. Of course, we already worked together, but this preparation has led to an enormous boost in focusing on border control as a chain.”
In July, the first Marechaussee started their work on the basis of the protocol Strengthening Border Control in the three Caribbean countries. Most of them arrived from the Netherlands a few weeks ago, some had already worked in the Caribbean. Most of the colleagues are seconded for a period of 6 to 12 months. In addition, some colleagues have already been given a permanent placement, in anticipation of the reorganization.
“Once the reorganization is complete, after consultation with the employee representation and unions, we hope to realize permanent placements from July 2023,” Ploegstra said. “Hopefully, we can publish those vacancies at the end of this year or early next year, so that the selected colleagues have enough time to prepare for their placement abroad.”
Until now, there were approximately fifteen vacancies to be filled each year; from 2023, the KMar will be faced with the challenge of filling approximately 85 vacancies in the Caribbean each year. “Those are quite the numbers,” Ploegstra said. “It is therefore a project with a lot of impact and a great and beautiful challenge.”
Ploegstra himself worked for four years on Curaçao, 3.5 years on St. Maarten and is now in position on Curaçao until July 2023. “The dynamics here are fantastic and challenging,” he said. “I have been able to develop enormously, both in my field and on a personal level.”
Since its first position in Curaçao in 1999, the Caribbean Brigade has grown from about 15 to 250. About 110 of these are military police who support local services in Aruba, Curaçao and St. Maarten.
In their collaboration with local entities, everything depends on the quality of personal relationships, Ploegstra concluded. “Showing respect, learning from local colleagues, daring to give trust, not judging, continuously focusing on working together, daring to serve – that is so important. If you succeed, you will get a lot in return. As soon as you connect with the local colleagues around you, you get the best colleagues you could wish for.”

Save the date for the Brown Pelican Sports Awards