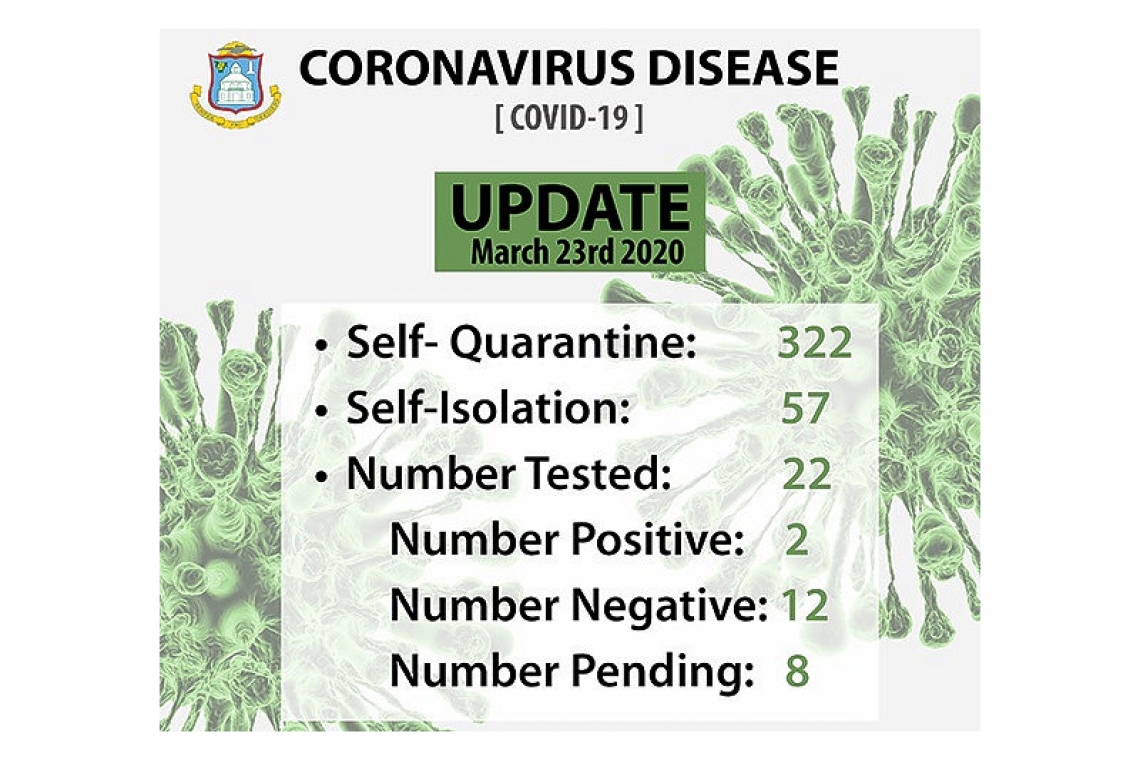 A table showing the latest figures.

She said the Collective Prevention Services (CPS) over the weekend had collected forms that were filled in by incoming passengers with residence in St. Maarten, and an overview of the information was provided to the EOC on Monday. These were the last flights to bring St. Maarten residents back home before the closure of the country’s airspace for incoming passengers at midnight Sunday.

There were 42 persons in self-quarantine as of Friday, March 20; 40 in self-isolation; and 13 suspected cases: one positive, nine negative and three pending diagnosis. The numbers spiked by March 23 with 322 persons in self-quarantine; 57 in self-isolation; and 22 suspected cases: two positive cases, 12 negative cases and eight pending.

She said the numbers on March 20 were as of 8:00pm and by March 23 had increased to final totals up to that day. The self-quarantined persons are mainly returning residents who have to stay confined at home. The spike from 42 to 322 comes from all those returning over the weekend who have been compliant and registered with CPS to be monitored, “and we appreciate their compliance,” she said.

The self-isolation cases are those who have dialled tel. 914 as a result of the public awareness campaign and are being monitored for symptoms.

The suspected cases are a subset of the self-isolation cases: as of Friday, 13 of the 40 persons; and as of Monday, 22 of the 57 persons. Tests are being run by Institute Pasteur in Guadeloupe and tests on eight patients are currently being awaited.

“We ask the community to remain vigilant with hygiene practices throughout the day and remain indoors at home as much as possible,” Jacobs said.

“Those that returned from abroad – while CPS has access to the flight manifest, it would be a gesture of good faith to call, register and email the form to CPS –

This email address is being protected from spambots. You need JavaScript enabled to view it. – in order to be monitored even if you have no symptoms at this time, or call 914 for more information.”