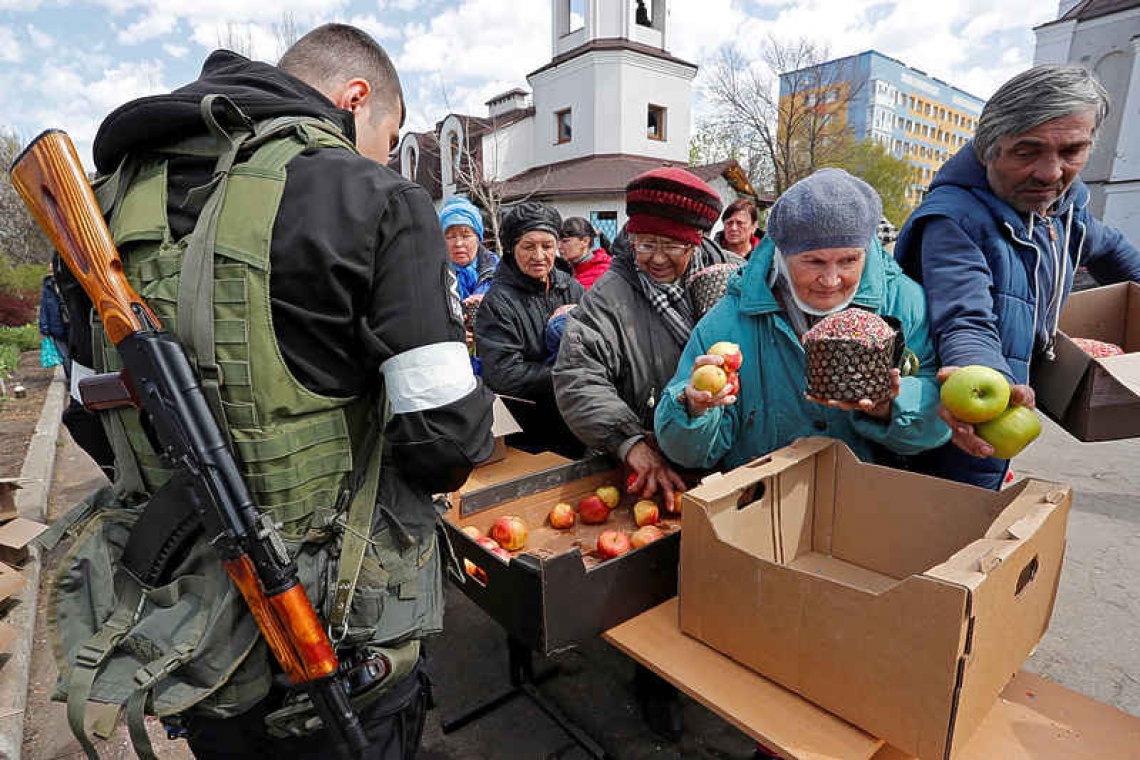 Zelenskiy is expected to have asked them for more powerful weapons to repel a Russian offensive in the south and east, which he has dubbed the Battle of the Donbas.
The trip by Blinken and Austin, announced earlier by Zelenskiy, would be the highest-level visit to Ukraine by U.S. officials since Russian President Vladimir Putin ordered the invasion of the country on Feb. 24. Washington has not confirmed that Blinken and Austin were in the Ukrainian capital, as it typically withholds information on sensitive visits in conflict zones for security reasons.
Late on Sunday, Oleksiy Arestovych, an adviser to Zelenskiy, said in a social media video that Blinken and Austin had arrived in Kyiv and were holding talks with the Ukrainian president. "We are inspired by the resilience of Orthodox Christians in Ukraine in the face of President Putin's brutal war of aggression," Blinken said earlier on Twitter.
Zelenskiy on Twitter thanked U.S. President Joe Biden and the United States for leadership in supporting Ukraine.
Earlier on Sunday, Zelenskiy said his nation would overcome "dark times," in an emotional address at Kyiv's 1,000-year-old Saint Sophia Cathedral to mark Orthodox Easter as fighting in the east overshadowed the religious celebrations. After Ukrainian fighters forced a Russian retreat from around Kyiv, Moscow's assault is now focused on the eastern Donbas region and the south of the country.
With a semblance of normal life returning to the capital, several countries have reopened embassies in recent days and some residents who fled the fighting returned for Easter. Moscow, which describes its actions in Ukraine as a "special military operation", denies targeting civilians and rejects what Ukraine says is evidence of atrocities, saying Kyiv staged them to undermine peace talks.
Pope Francis called for an Easter truce: "Stop the attacks in order to help the exhausted population. Stop," he said.
Ecumenical Patriarch Bartholomew, the spiritual head of Eastern Orthodox Christians worldwide, called for humanitarian corridors in Mariupol and other areas of Ukraine, where he said "an indescribable human tragedy is unfolding".
Ukrainian refugees filled churches across central Europe. "I pray that this horror in Ukraine ends soon and we can return home," said Nataliya Krasnopolskaia, who fled to Prague from Odesa last month, one of the more than 5 million Ukrainians estimated to have escaped the country.
Preparing for the visit by Blinken and Austin, Ukrainian officials had drawn up a list of weapons urgently needed from the United States, including anti-missile systems, anti-aircraft systems, armoured vehicles and tanks, Zelenskiy aide Igor Zhovkva told NBC News on Sunday.
The United States and NATO allies have shown growing readiness to supply heavier equipment and more advanced weapons systems. Britain has promised to send military vehicles and is considering supplying British tanks to Poland to free up Warsaw's Russian-designed T-72s for Ukraine.