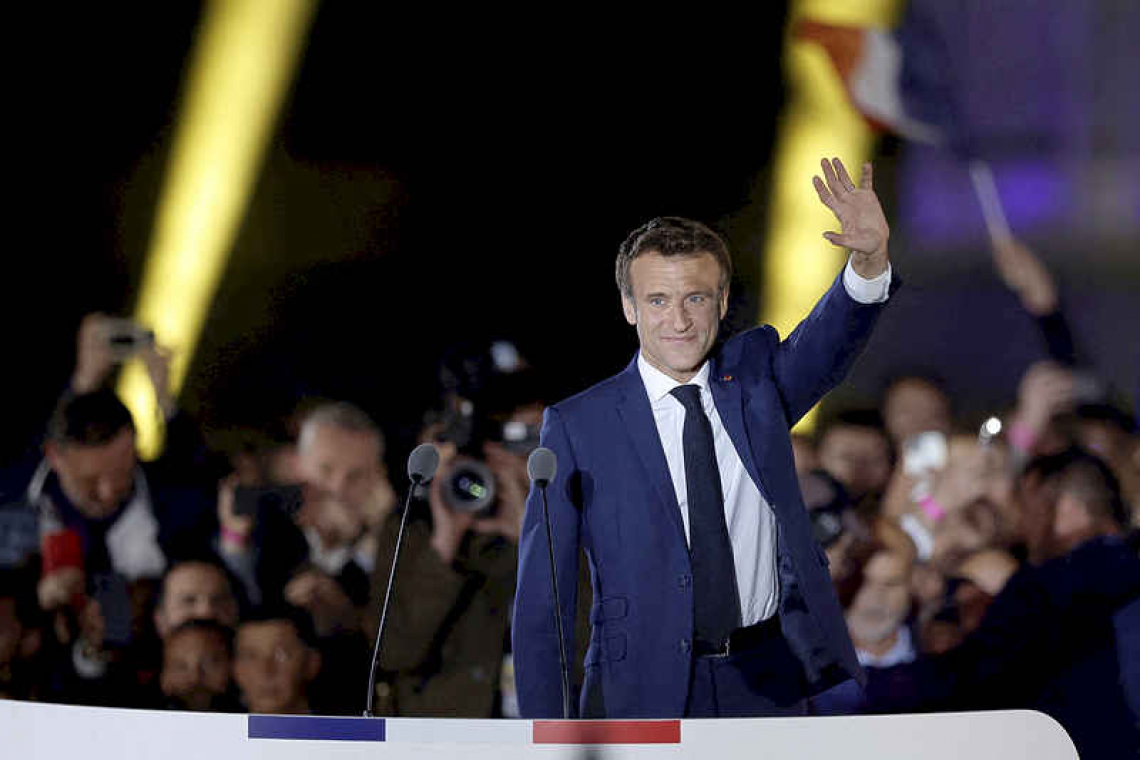 French President Emmanuel Macron waves as he arrives to deliver a speech after being re-elected as president, following the results in the second round of the 2022 French presidential election, during his victory rally at the Champs de Mars in Paris, France, on Sunday.

PARIS--French President Emmanuel Macron defeated his far-right rival Marine Le Pen on Sunday by a comfortable margin, securing a second term and heading off what would have been a political earthquake.

Cheers of joy erupted as the results appeared on a giant screen at the Champ de Mars park at the foot of the Eiffel tower, where Macron supporters waved French and EU flags. People hugged each other, danced and chanted "Macron!".

European leaders also welcomed the news that pro-European Union Macron and not nationalist eurosceptic Le Pen had won. Pollsters projected Macron securing around 58.5% of the vote. Such estimates are normally accurate but may be fine-tuned as official results come in.

"I am very relieved - it had looked very close and populism was at our door," 42-year old Alessandro Paleni told Reuters at the Macron rally. But he stressed the president faced a difficult task given how many votes went to the far-right.

Le Pen, who at one stage of the campaign had trailed Macron by just a few points in opinion polls, quickly admitted defeat but vowed to keep up the fight, with parliamentary elections looming in June. "I will never abandon the French," she said to supporters chanting "Marine! Marine!"

Macron can expect little to no grace period after many, especially on the left, only voted for him reluctantly to block the far-right from winning. Protests that marred part of his first mandate could erupt again quite quickly, as he tries to press on with pro-business reforms. "We will not spoil the victory ... but (Le Pen's) National Rally has its highest score ever," Health Minister Olivier Veran told BFM TV.

"There will be continuity in government policy because the president has been reelected. But we have also heard the French people's message," he added, pledging change.

The nature of Macron's second term will be heavily influenced by the outcome of parliamentary elections in June. Le Pen said she aimed for a strong contingent in the assembly while hard-left Jean-Luc Melenchon said he wants to be Prime Minister, something that would force Macron into an awkward and stalemate-prone "cohabitation".

Philippe Lagrue, 63, technical director at a theatre in Paris, said earlier in the day he had voted for Macron after voting for Melenchon in the first round. He said he would vote for Melenchon again in June. "Melenchon Prime Minister. That would be fun. Macron would be upset, but that's the point."

Sunday's victory for Macron was immediately hailed by allies as a reprieve for mainstream politics that have been rocked in recent years by Britain's exit from the European Union, the 2016 election of Donald Trump and the rise of a new generation of nationalist leaders. "Bravo Emmanuel," European Council President Charles Michel, wrote on Twitter. "In this turbulent period, we need a solid Europe and a France totally committed to a more sovereign and more strategic European Union."

Macron will join a small club - only two French presidents before him have managed to secure a second term. But his margin of victory looks to be tighter than when he first beat Le Pen in 2017, underlining how many French remain unimpressed with him and his domestic record.

That disillusion was reflected in turnout figures, with France's main polling institutes saying the abstention rate would likely settle around 28%, the highest since 1969.

Against a backdrop of Russia's invasion of Ukraine and the ensuing Western sanctions that have exacerbated a surge in fuel prices, Le Pen's campaign homed in on the rising cost of living and Macron's sometimes abrasive style as some of his weakest points. She promised sharp cuts to fuel tax, zero-percent sales tax on essential items from pasta to diapers, income exemptions for young workers and a "French first" stance on jobs and welfare.

"I'm shocked to see that a majority of French people want to reelect a president that looked down on them for five years," Adrien Caligiuri, a 27-year-old project said at the Le Pen rally.

Macron meanwhile pointed to Le Pen's past admiration for Russia's Vladimir Putin as showing she could not be trusted on the world stage, while insisting she still harboured plans to pull France out of the European Union - something she denies. In the latter part of the campaign as he sought the backing of left-leaning voters, Macron played down an earlier promise to make the French work longer, saying he was open to discussion on plans to raise the retirement age from 62 to 65.

In the end, as viewer surveys after last week's fractious televised debate between the two testified, Le Pen's policies - which included a proposal to ban people from wearing Muslim headscarves in public - remained too extreme for many French.

Ex-merchant banker Macron's decision to run for the presidency in 2017 and set up his own grass roots movement from scratch up-ended the old certainties about French politics - something that may come back to bite him in June's parliamentary elections.