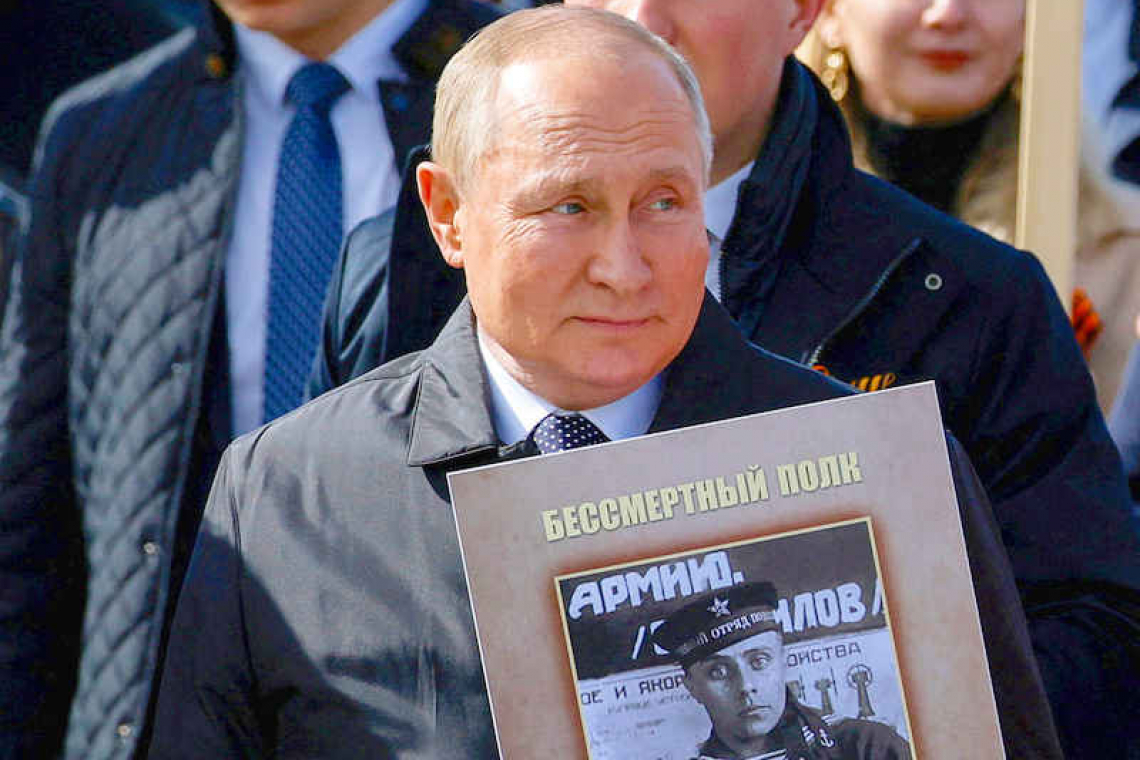 Russian President Vladimir Putin holds a portrait of his father, war veteran Vladimir Spiridonovich Putin, as he takes part in the Immortal Regiment march on Victory Day, which marks the 77th anniversary of the victory over Nazi Germany in World War Two, in central Moscow, Russia on Monday.

KYIV/KHARKIV, Ukraine--Vladimir Putin exhorted Russians to battle in a defiant Victory Day speech on Monday, but was silent about plans for any escalation in Ukraine, despite Western warnings he might use his Red Square address to order a national mobilisation.

In Ukraine, there was no let up in fighting, with Kyiv reporting missile strikes in the southern port of Odesa and a renewed push by Russian forces to defeat the last Ukrainian troops holding out in a steelworks in ruined Mariupol.
Monday's annual parade in Moscow - with the usual ballistic missiles and tanks rumbling across the cobblestones - was easily the most closely watched since the 1945 defeat of the Nazis that it celebrates. Western capitals had openly speculated for weeks that Putin was driving his forces to achieve enough progress by the symbolic date to declare victory - but with few gains so far, might instead announce a national call-up for war.
The Russian president did neither, but repeated his assertions that his forces were again fighting Nazis. "You are fighting for the Motherland, for its future, so that no one forgets the lessons of World War Two. So that there is no place in the world for executioners, castigators and Nazis," Putin said from the tribune outside the Kremlin walls.
Ukraine's President Volodymyr Zelenskiy, in his own speech, promised Ukrainians they would triumph. "On the Day of Victory over Nazism, we are fighting for a new victory. The road to it is difficult, but we have no doubt that we will win," said Zelenskiy, wearing plain army garb with his shirt sleeves rolled up.
In Washington, where sources say Democratic lawmakers have agreed on a $40 billion aid proposal for Ukraine, including a massive new weapons package, the White House described Putin's remarks as "revisionist history that took the form of disinformation."
Russia's war has killed thousands of civilians, sent millions of Ukrainians fleeing and reduced cities to rubble. Moscow has little to show for it beyond a strip of territory in the south and marginal gains in the east.
Sheltering in a metro station in Kharkiv - Ukraine's mainly Russian-speaking second city which has been bombed relentlessly since the war's first days - World War Two survivor Vira Mykhailivna, 90, buried her tear-stained cheeks in her hands. "I didn't think this could ever happen to us," she said. "This day was once a great celebration."
Kateryna Grigoriyevna, 79, a retired bank manager who has spent 10 weeks underground in the cavernous station, sat eating an ice cream she had ventured out to buy for Victory Day. "We hate Putin," she said, glancing around the platform where some 200 people cluster in tents and on thin mattresses. "I would kill him myself if I could."
The Soviet victory in World War Two has acquired almost religious status in Russia under Putin, who has invoked the memory of the "Great Patriotic War" throughout what he calls a "special military operation" in Ukraine.
Western countries consider that a false analogy to justify unprovoked aggression. "There can be no victory day, only dishonour and surely defeat in Ukraine," said British Defence Secretary Ben Wallace.
In Poland, the Russian ambassador was surrounded by protesters at a memorial ceremony and doused in red paint. Ambassador Sergei Andreyev, his face dripping and his shirt stained, said he was "proud of my country and my president".
After an assault on Kyiv was beaten back in March by strong Ukrainian resistance, Russia poured more troops in for a huge offensive in the east last month. Russian gains have been slow at best, and Western arms are flooding into Ukraine for an expected counter-attack. Western military experts - many of whom initially predicted a quick Russian victory - now say Moscow could be running out of troops. A full declaration of war would let Putin activate reservists and send conscripts.
"Without concrete steps to build a new force, Russia can't fight a long war, and the clock starts ticking on the failure of their army in Ukraine," tweeted Phillips O'Brien, a professor of strategic studies at Britain's University of St Andrews.
The war still seems to enjoy strong public support in Russia, where independent journalism is effectively banned and state television says Russia is defending itself from NATO. Conscription would test that support. Olga, participating in St Petersburg's "immortal regiment" commemoration march, said she feared for her student son.
"I'm really worried about him. I know many mothers whose sons are now of conscription age ... They're trying to find any way to save their children from going to this war."