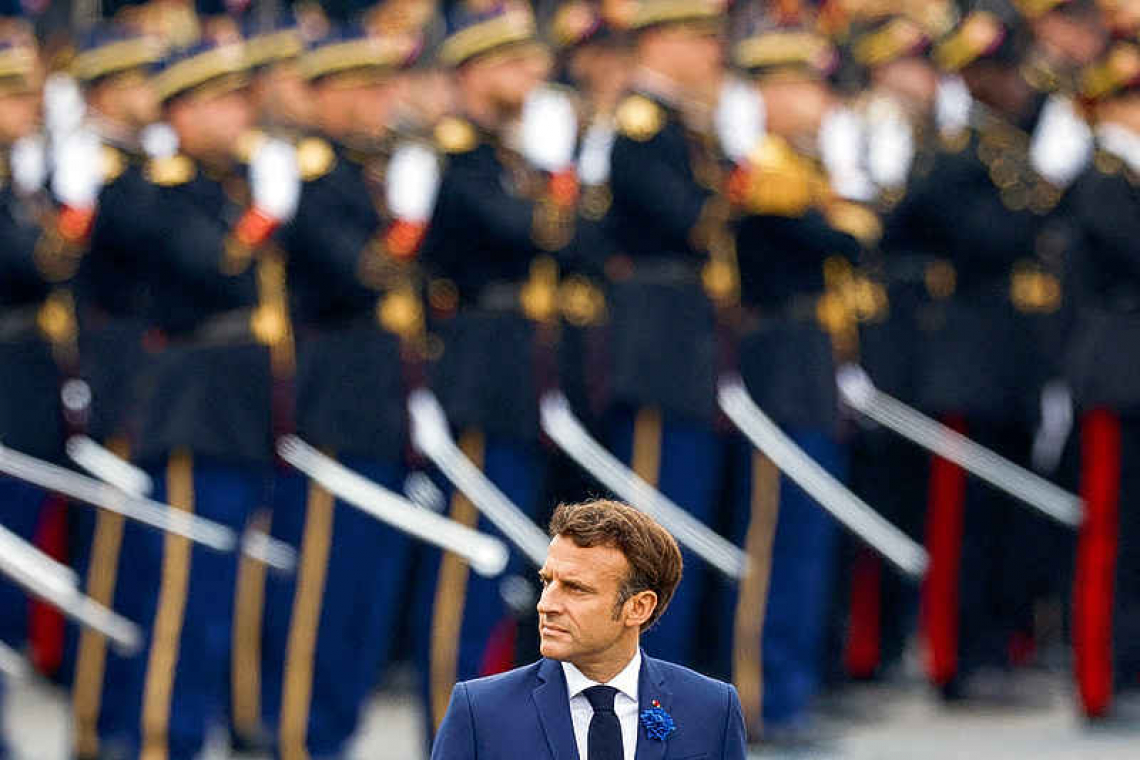 PARIS--France's Emmanuel Macron was sworn in for his second term as president on Saturday, promising to lead the country with a "new method" as his political rivals kicked off campaigning for next month's legislative election.

In a country where presidents rarely get re-elected, Macron won 58.5% of the votes in the second round against the far-right's Marine Le Pen, despite strong opposition to his pro-business policies and a proposal to raise the retirement age.
In a short speech, Macron spoke of the need to innovate at a time of unprecedented challenges for the world and for France, and said his second term would be "new" and not merely a continuation of his first five years in office. "We need to invent a new method together, far from tired traditions and routines, with which we can build a new productive, social and ecological contract," he said, promising to act with "respect" and "consideration".
He did not outline any new policy proposals, but highlighted the threat posed by Russia's invasion of Ukraine and the global environmental crisis.
Among the 500 guests present were former presidents Francois Hollande and Nicolas Sarkozy, former prime ministers Edouard Philippe, Manuel Valls, Alain Juppe and Jean-Pierre Raffarin, as well as religious leaders and other state figures. Hollande, who threw his support behind Macron in the April 24 second-round vote, told reporters after the ceremony that Macron could not afford to reproduce the "methods of yesterday".
"What we noticed in this election was that there are more citizens (that voted) out of rejection, rather than out of hope," Hollande said.
Macron's inauguration marked the start of campaigning for the June 12-19 parliamentary vote. A newly united political left - a coalition formed between Hollande's Socialist Party, the hard-left La France Insoumise (France Unbowed) party, the Greens and the Communist Party - is hoping to deprive Macron of a majority in parliament.
Under the banner of the "New Popular, Social and Ecological Union" (NUPES), representatives of the alliance's different parties addressed a convention in the Parisian suburb of Seine-Saint-Denis. "We are putting in place an act of collective resistance," said France Insoumise leader Jean-Luc Melenchon, who ran against Macron in the presidential election and is now bidding to become prime minister.
The once-dominant parties of Hollande and Sarkozy - the Socialists on the left and Les Republicains on the right - have been severely weakened in recent years, in part due to the rise of Macron's political movement. As the Socialists joined the leftist alliance, Les Republicains kicked off its campaign by ruling out pacts with any prominent parties including the far-right.
"Les Republicains are independent and cannot be absorbed by the presidential majority, nor by the extremes," party president Christian Jacob told reporters at a national council meeting.
Le Pen's far-right National Rally (RN) was absent from the political stage on Saturday. Le Pen herself returned to the electoral fray on Sunday, announcing herself as a candidate in the parliamentary elections in June after weeks of silence since she lost the presidential vote to Macron last month.
"I hope that we will have a strong presence in parliament to lead, once again, the fight against the social policies that Emmanuel Macron wants to put in place," she said, adding she would run for re-election in her northern constituency of Pas-de-Calais.
Le Pen was speaking on a visit to the town of Hénin-Beaumont marking Victory Day - the anniversary of the Allies' victory in 1945 over Nazi Germany in World War Two. Le Pen pitched herself as the centrist president's main opponent and took aim at hard-left politician Jean-Luc Melenchon.
"The reality is that Jean-Luc Melenchon helped get Emmanuel Macron elected, so that completely discredits his ability to position himself as an opponent," Le Pen said, highlighting her disagreement with the left-wing politician on immigration and law and order issues.
Macron is due to visit the European Parliament in Strasbourg for "Europe Day" on Monday and to meet German Chancellor Olaf Scholz in Berlin on the same day.