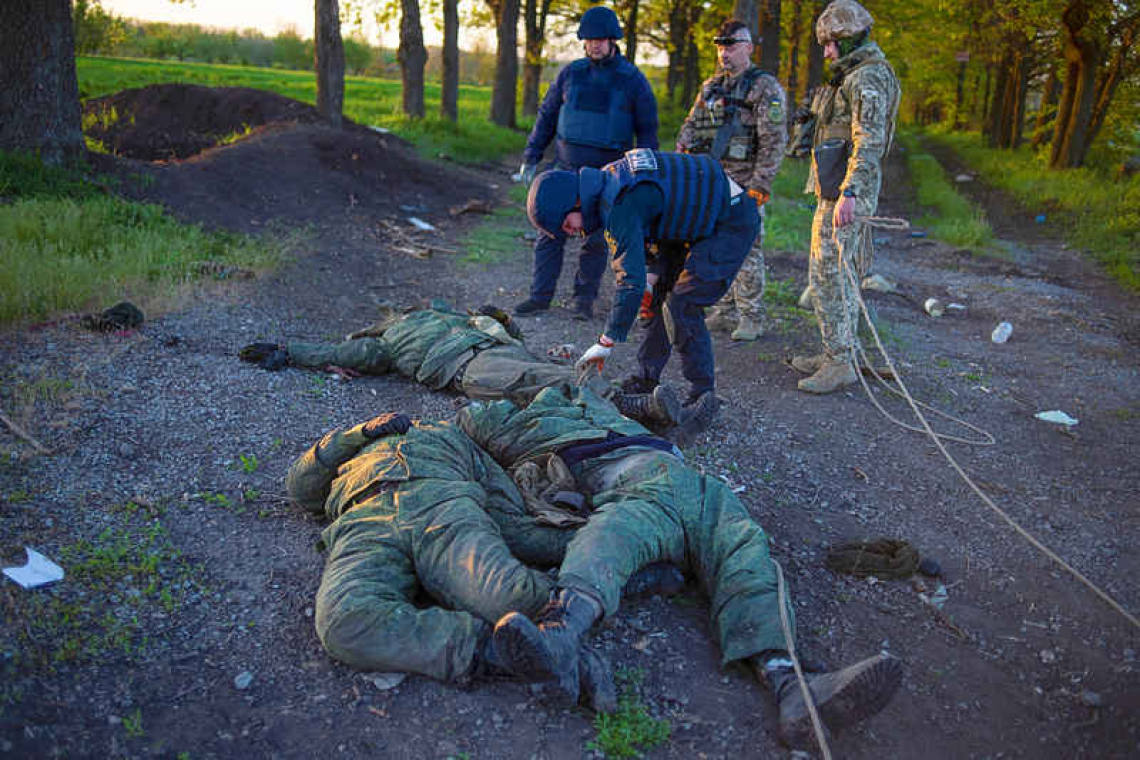 Sappers check for explosive devices on the bodies of Russian soldiers found in the village of Vilkhivka after it was retaken by Ukrainian Armed Forces, in Kharkiv region, Ukraine May 9, 2022.

KHARKIV, Ukraine--Ukraine said on Tuesday its forces had recaptured villages from Russian troops north and northeast of the city of Kharkiv, pressing a counter-offensive that could signal a shift in the war's momentum and jeopardise Russia's main advance.

Ukrainian troops in recent days recaptured four settlements north of Ukraine's second-largest city, said Tetiana Apatchenko, a press officer with the main Ukrainian force in the area.
President Volodymyr Zelenskiy said the Ukrainian successes were gradually pushing Russian forces out of Kharkiv in the country's northeast, which has been under perpetual bombardment since the war began. "But I also want to urge all our people... not to spread excessive emotions. We should not create an atmosphere of excessive moral pressure, where victories are expected weekly and even daily," Zelenskiy said in a video address.
In Washington, top U.S. intelligence officials said the war was at a stalemate. President Vladimir Putin appeared to be preparing for a long conflict, and a Russian victory in the Ukraine's eastern Donbas region might not end the war, Director of National Intelligence Avril Haines said.
But the counterattack near Kharkiv could signal a new phase, with Ukraine now going on the offensive after weeks in which Russia mounted a massive assault without making a breakthrough. By pushing back Russian forces who had occupied the outskirts of Kharkiv since the start of the invasion, the Ukrainians are moving into striking distance of the rear supply lines sustaining the main Russian attack force further south.
"Ukrainians are getting close to the Russian border. So all the gains that the Russians made in the early days in the northeast of Ukraine are increasingly slipping away," said Neil Melvin of the RUSI think-tank in London.
During a Red Square military parade on Monday marking the end of World War Two, Putin exhorted Russians to keep fighting but gave no indication of his further strategy. Since Russia was forced to abandon an assault on the capital Kyiv at the end of March, its main force has been trying to encircle Ukrainian troops in the Donbas, using the city of Izyum south of Kharkiv as a base. Ukrainian troops have so far mostly held out against assaults from three directions.
But by pushing back near Kharkiv, Ukraine could now force Moscow to switch to trying to defend its own long supply lines to Izyum. Western military analysts said there were signs the counter-attack was already sapping Russia's advance.
"Our assessment is that they're (Russians) having to pull some forces away from the axes leading to the control of the Donbas region because of what has happened in Kharkiv, and it just underscores the challenges they have," said retired U.S. General Jack Keane, now chairman of the Institute for the Study of War think tank.
In the south, Russian forces were again pummelling the Azovstal steelworks in Mariupol, trying to capture the last bastion of Ukrainian resistance in the ruined city where Ukraine says tens of thousands of people have died under two months of Russian siege. Scores of civilians have been evacuated from the steelworks in recent days, but an aide to Mariupol's mayor, Petro Andryushchenko, said at least 100 still remained inside.
Ukraine's Azov Regiment, holding out in Azovstal, said in a social media post that in the past 24 hours, 34 Russian aircraft had flown over the plant including eight sorties by strategic bombers. It said the plant had come under fire from the Russian navy and from tanks, artillery and rockets. Reuters was unable to verify the situation.
In Odesa, firefighters battled blazes until the early hours of Tuesday after seven Russian missiles hit a shopping centre and depot on Monday. One person was killed and five people were injured, Ukraine's armed forces said.
Ukraine said its armed forces in the Donbas on Tuesday destroyed 12 Russian tanks and 19 armoured vehicles and shot down three aircraft.