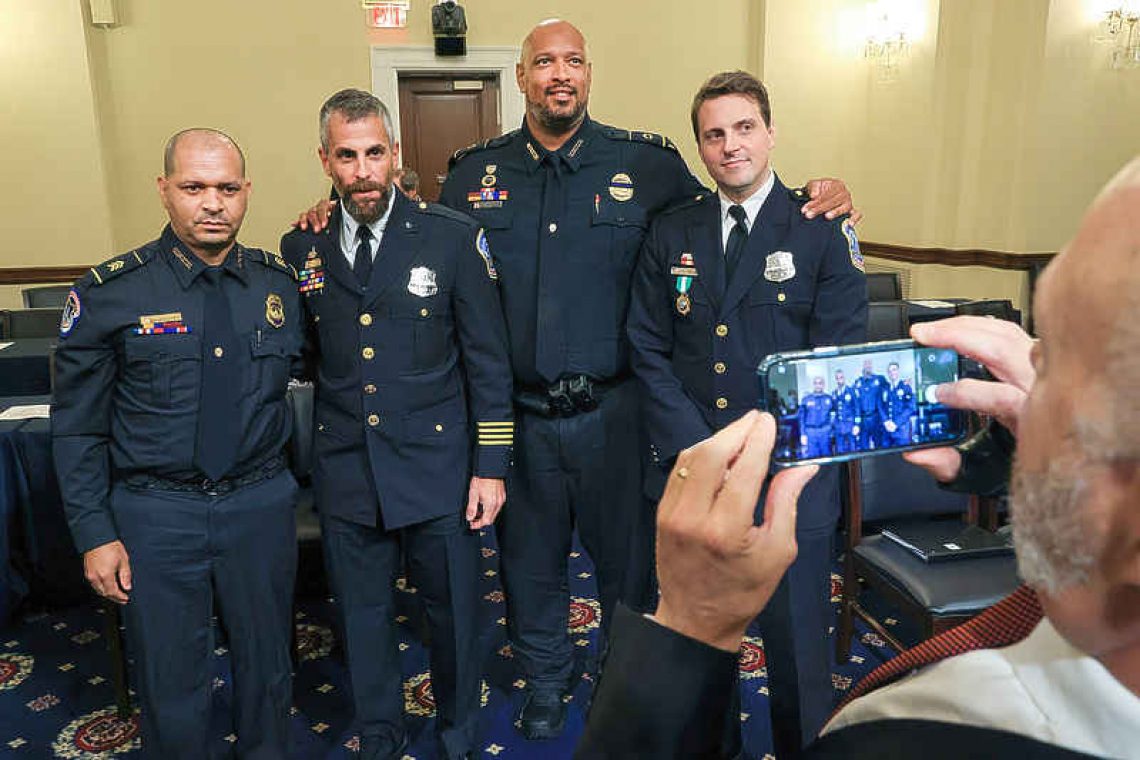 WASHINGTON--Four police officers on Tuesday told lawmakers they were beaten, taunted with racial insults, heard threats including "kill him with his own gun" and thought they might die as they struggled to defend the U.S. Capitol on Jan. 6 against a mob of then-President Donald Trump's supporters.

Often tearful, sometimes profane, the officers called the rioters "terrorists" engaged in an "attempted coup" during a 3-1/2 hour congressional hearing in which they also criticized Republican lawmakers who have sought to downplay the attack.
"I feel like I went to hell and back to protect the people in this room," said District of Columbia police officer Michael Fanone, referring to lawmakers. "The indifference shown to my colleagues is disgraceful," Fanone added, slamming his hand onto the witness table.
It was a dramatic first hearing for a Democratic-led House of Representatives committee formed despite opposition by Trump's fellow Republicans to investigate the worst violence at the Capitol since the British invasion in the War of 1812. Some Democrats have suggested Trump, who made an incendiary speech to supporters before the riot repeating false claims that the 2020 election was stolen from him through widespread voting fraud, be called to testify. The officers recounted how rioters fought on Trump's behalf, seeking to prevent Congress from formally certifying now-President Joe Biden's election victory.
"He himself helped create this monstrosity," Capitol Police Officer Aquilino Gonell said of Trump as he described rioters wielding weapons including police shields, batons, sledgehammers, flag poles, Taser devices, chemical irritants, metal pipes, rocks, broken table legs and metal guard rails.
The officers urged lawmakers to determine whether Trump or others helped instigate the riot. "There was an attack carried out on Jan. 6, and a hit man sent them. I want you to get to the bottom of that," Capitol police officer Harry Dunn testified.
Committee Chairman Bennie Thompson and Republican panel member Liz Cheney warned against "whitewashing" a riot in which more than 535 people now face criminal charges, even as Trump allies portray the panel as politically motivated. Cheney, stripped of her House Republican leadership post after denouncing Trump's election falsehoods, asked: "Will we be so blinded by partisanship that we will throw away the miracle of America?"
The committee, expected to explore questions about how the riot was organized and financed as well as law enforcement's lack of preparedness, heard the most detailed public account to date of what police encountered. More than a hundred officers were injured by hundreds of rioters.
Fanone said he was pulled into the crowd, beaten, shocked repeatedly with a Taser, robbed of his badge and knocked unconscious, suffering a heart attack. Fanone said he heard a rioter say "kill him with his own gun."
"I yelled out that I have kids," Fanone said, appealing to his assailants' humanity.
Dunn, who is Black, said rioters repeatedly called him a racial slur. Dunn said he challenged their claims that no one had voted for Biden by telling them that he had done so.
Gonell, an Iraq war veteran and naturalized U.S. citizen born in the Dominican Republic, likened the violence to "a medieval battlefield" and recalled rioters labeling him a traitor who should be executed. Gonell said he thought to himself, "This is how I'm going to die."
Washington officer Daniel Hodges called the rioters "terrorists," citing the term's legal definition. He said they told him: "You will die on your knees!"
Hodges said many rioters appeared to be white nationalists. While Black and Hispanic colleagues faced racial slurs, Hodges, who is white, said rioters tried to recruit him, asking, "Are you my brother?"
The rioters sent lawmakers and then-Vice President Mike Pence scrambling for safety. Four people died on Jan. 6: one rioter shot by police and three others who experienced medical emergencies. A policeman who was attacked by rioters died the following day. Two others later committed suicide.
"Some people are trying to deny what happened, to whitewash it, to turn the insurrectionists into martyrs," Thompson said. "And all of it for a vile, vile lie."
Democrats created the panel after Republicans blocked formation of an independent bipartisan investigatory commission. House Minority Leader Kevin McCarthy acted to prevent fellow Republicans from joining the committee after Democratic House Speaker Nancy Pelosi rejected two of his choices amid concerns they would undermine its integrity. Two Republicans picked by Pelosi are serving. Republican Jim Jordan, one of the two Pelosi blocked, called the hearing a "partisan January 6th charade."