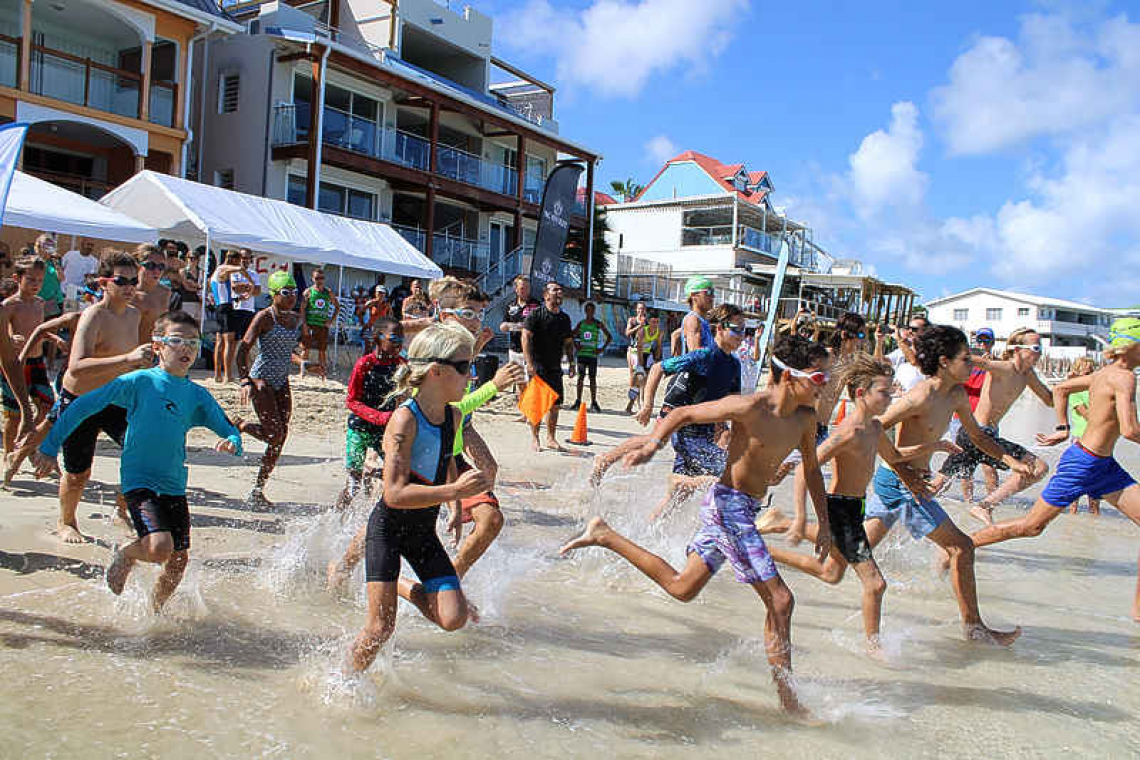 The beach was an idyllic setting for the event that consisted of a 250-metre swim followed by a 1K run (on the beach) to be completed four times for the adult categories.
Pigeon (40) completed the distance first in a time of 37:06 but was pushed all the way by second placed David Verdol from Guadeloupe finishing in 37:33.
“It’s much harder than it looks and you hardly feel your legs any more when you have to repeat the loop four times,” said Pigeon of the race afterwards. “David (Verdol) had a faster swim each time than I did but I was able to catch him on the run at the end.”
Pigeon is building up for the Half Ironman World Championships at the end of October in Utah, USA, which he qualified for in Puerto Rico last month. He will be competing against the best of the world and some 2,000 tri-athletes. At this level, he’s realistic to know more or less where he will finish but its more about the experience and the fun.
“I did do it before in 2015 so I know what to expect,” he says. “After October I will probably do another Half Ironman in the Spring of 2023.”
He will be joined at the Half Ironman by the St. Barths triathletes Stéphane Lenoir, Fabien Husson, Jean-Marc Outil. Also competing in the age categories will be François Delaporte (55 plus) and one other from St. Barths.
Pigeon always remains loyal to the local events, even though a short Aquathlon is not really the right training for a Half Ironman but he feels it’s important to do them all. At 40 he considers he has reached his peak of fitness for triathlons.
“I’m someone who is good at each of the three disciplines but I think my cycling has come out stronger lately”, he states.
In the 40-49 category it was Pigeon first, David Verdonk second, Xavier Dias third and St. Maarten Roadrunners President Krispijn Teunissen fourth. Mens 18-39 was won by Max Kruszewaska, Alex Guerre second, and Julien Chaboeuf third. In the 50 plus category it was Francois Huc first, Juan Pablo Piscione second and Eric Triboulet third.
In the women categories, Laura Fionnes won the 18-39 group with Celine Verdonck second, and Melinda Cerulo third. Caroline Deplanque (fastest time overall of 42:51) won the 40-49 category, Anne Roerhig was second and Nadia Noel third.
The 50 plus category saw Yannick Blancafort take the win ahead of Susy Piscione in second and Valerie Laigle third. In the children’s categories, Tim Doublecourt won the 11-13 group (one loop) and Oceane Chilou first for the Girls. Tao Gentil won the 14-16 group (2 loops) with Thomas Grumel third and Meks Teunissen third.
The event attracted over 65 participants.