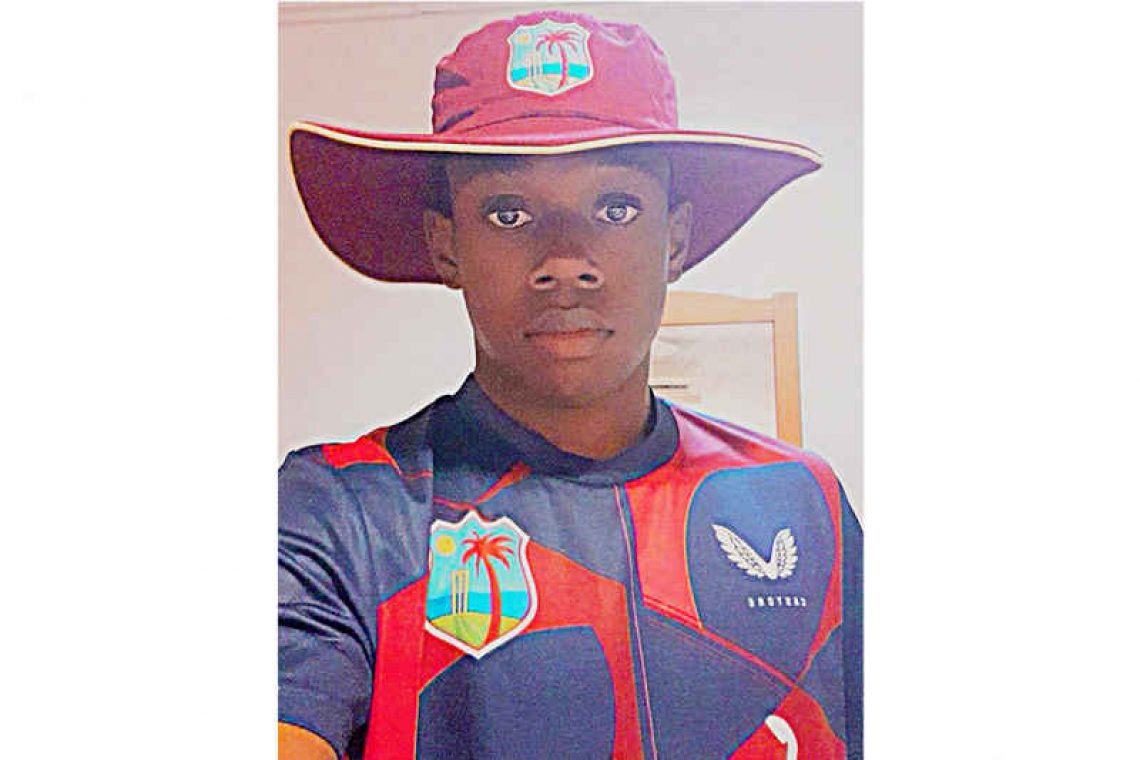 CUL DE SAC--St. Maarten U19 cricketer Nathan Edward is officially a member of the West Indies Rising Stars U19 World Cup team. Edward who was not initially part of the final team was selected on December 24 to join the World Cup team in St. Vincent. He joins Kaecy Carty as the only players from St. Maarten to represent the island in a West Indies U19 team. The West Indies U19 team is in St. Vincent to compete against their South African counterparts in four 50-overs matches in preparation for the World Cup.

The Youth World Cup which comprises 16 major cricket nations in the world is scheduled to bowl off on January 14 in the West Indies. Those teams are Bangladesh, England, Canada and the United Arab Emirates in Group A, with debutants Uganda placed in Group B alongside India, South Africa and Ireland. Group C comprises Pakistan, Afghanistan, Zimbabwe and Papua New Guinea and Group D sees host West Indies, Australia and Sri Lanka and Scotland. The home team is slated to open the tournament against Australia at the Providence Stadium in Guyana from 10:00am.
Edward whose journey continues to be a setback-and-comeback story is expected to make an impact on the team with the left-arm swing bowling, his compact batting and athletic fielding. He was not originally selected to the training camp of 56 players from across the Caribbean but was later called up because a player got injured. He finished that camp as one of the most outstanding players and was selected to travel to England for six one-day matches. When the team returned to the Caribbean on September 16, he along with other members of the team assembled for continued practice matches in Antigua in early November. On November 29, the selectors named the team, but Edward did not make the final 15-man squad for the World Cup. That team was training in Antigua but then moved to St. Vincent for the matches against South Africa from December 26.
Edward was asked about his mindset during this rollercoaster ride. ‘When I didn't get pick for the final 15 I was disappointed but I didn't let that bring me down. I knew anything could happen at any moment so I just kept practicing.  And I brought God into my situation.’ The 16-year-old continued; ‘Although people kept telling me you have another year to get in the team I wasn't focusing on the other year because you never know what could happen. I was telling myself if I make it this far, I want to stay in it now, not wait for next world Cup. I am thankful for my parents and teammates they kept me up and going. A veteran of the game Keith Carty always told me what is for me will be for me, so I just kept pushing.’ With much excitement, Edward stated, ‘When I got the call that I was a travelling reserve, I cried a little bit and my mother comforted me and told me it is not over, great players have an interesting story behind them. And my father who brought me into the game kept telling me to don’t give up. He always kept me in check to see where my head is and to make sure I do not quit on what I love.’
Edward was called up on December 24 as a replacement after another player got injured. Edward who never gave up on his dreams. He arrived in St. Vincent on December 26.
The practise matches against South Africa U19 continue on December 28, 30 and January 3.