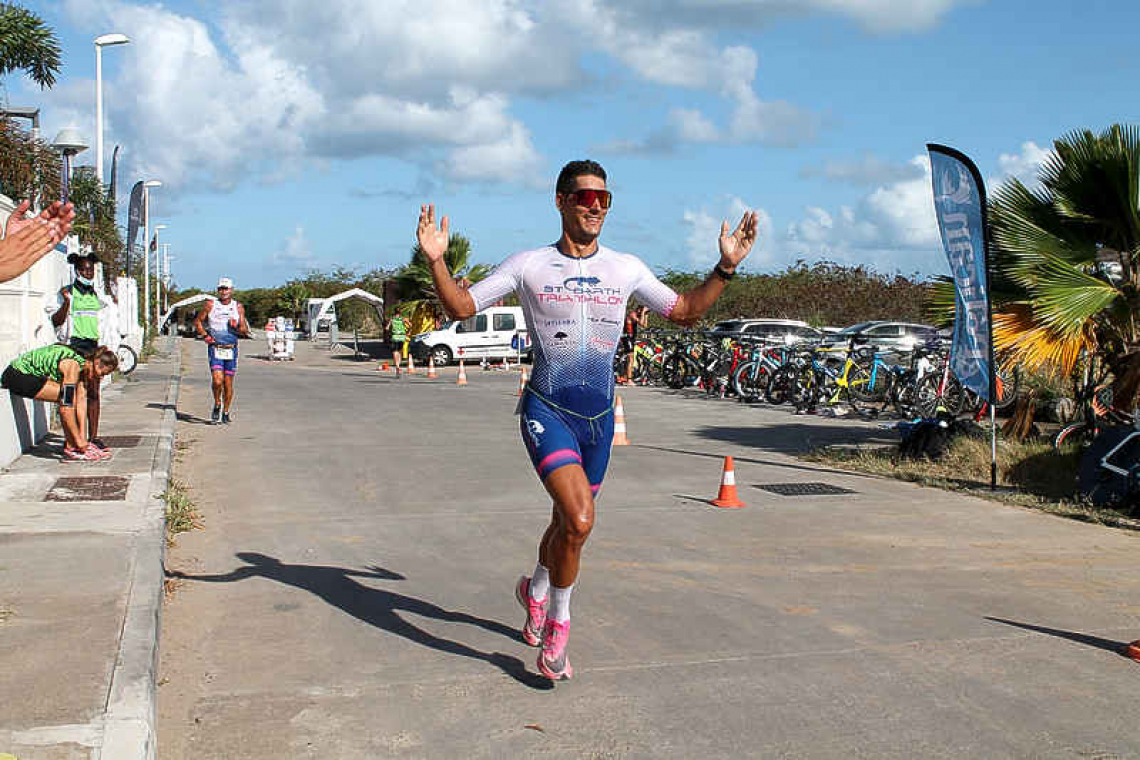 MARIGOT—St. Barths triathlete Fabien Husson continued to assert his dominance in St. Martin with another win, this time at the Saint-Martin Electro Clim (SMEC)-sponsored Duathlon organised by SXM Tri Academie in Grand Case on Sunday.

Competing in the Individual category, Husson coasted home after completing the 5K run, 20K bike and 2.5K run in the fastest time of 58: 25, denying Gregory Pigeon from SXM Tri Academie once again who finished second in 1:02:15. For these two rivals, it was a carbon copy result of the Sunset Mini Triathlon on April 4.

In third place was SX Treme Runners’s Manuel Luson in 1:05:11 who was also the top Junior. Andy Guibreteau (15) competing for Tri Sport Tigers continued his meteoric rise with a sensational fourth place overall and second Junior in a time 1:05:42.

SXM Tri Academie’s Caroline Delplanque was first in the women’s race in 1:13:59 (19th overall) followed by Celine Verdonck from SX Treme Runners in 1:17:08 (24th overall). Jessica Pearson-Outil from SBH Triathlon was third in 1:23:14.

Five thumbs up for Susy Piscione for completing her individual race in 1:34:35 while brother Mark Maidwell chose to do the bike segment for Team Punishers in the Mixed Teams with first time runner Riddhi Samtani.

Riding on the new asphalt must have been a joy for the cyclists who were seen flying downwind on their laps between the Hope Estate roundabout and the turn at the Cité Scolaire entrance in La Savane but they still had to battle upwind before transitioning for the run segments.

“I went downwind too hard on the first lap and paid the price at the end for not realising how much of a stretch into the wind it was without a break,” commented Maidwell. “But it was such a relief to go downwind again.”

Said Riddhi: “I was so nervous to be a partner with somebody like Mark who has been in the game for so long but it was an honour. I didn’t think I could do it but I had a lot of support. I had run a segment in the around the island race but this was the first time to do a Duathlon and in a team.”

Team Flash (Kianny and Clement) won the Men’s team category with team Raydon and Reni in second and Les Intellos third. Team categories alco included Mixed Teams and all women teams. In all 15 teams took part. With individuals and teams some 70 participants competed in the successful event. Kids races followed the adult race.

Husson insisted he is a keen amateur but is training for a full distance Ironman Triathlon (4K swim, 180K bike and marathon run) in Tulsa, Oklahoma, next month May 23 with fellow St. Barth’s triathlete Stephane Lenoir.

“That’s why we are training hard now, but we will start to wind down as we get closer,” he explained. “It’s very hard to train in St. Barths, we swim in the sea but for the cycle we have to use the home trainer, 10 hours a week, but the running is fine, just a lot of laps.”

Complete results and times for the SMEC Duathlon are on the sport-timing caraibes.com website.