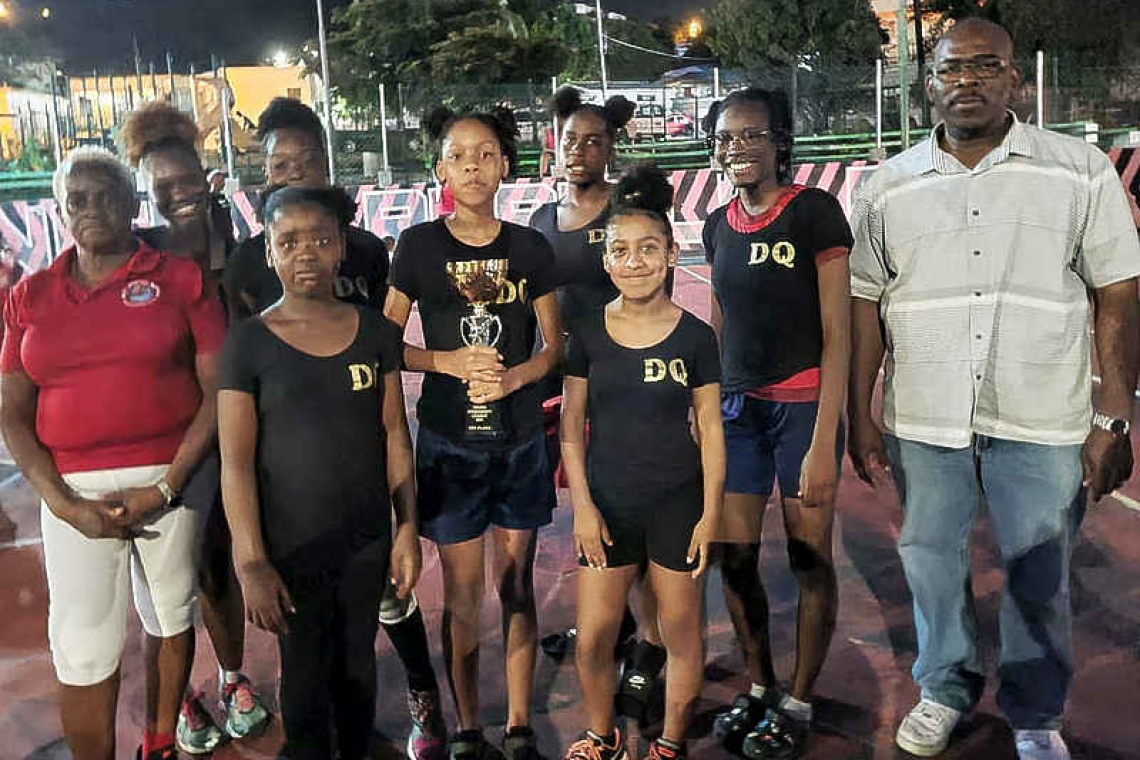 PHILIPSBURG—Dutch Quarter became undisputed and undefeated champions of the Netball Community League after overpowering St. Peters 39-28 in the Gold Medal Match on Sunday, part of the final matches played at the St. Peters Basketball Court.

The last match of the day saw both teams pull out all the stops and gave attending fans a great show of their skills and competitiveness. DQ scored the highest number of goals for the whole tournament, scoring 39 goals split between the tournament’s top scorer Tikeha Bourne with 27 (her best personal record) and Lean Ford 12.
Lean ensured through her athleticism and great game awareness to be both a great defensive asset as well as offensively by being the main feeder to her playmate Tikeha to score. Tikeha in great form was able to have an almost perfect scoring performance.
Dutch Quarter outscored St. Peters in all but the second quarter namely: Q1 10–6, Q2 5–6, Q3 10–9 and in a Q4 blow out 14–7.  For St. Peters Shervanna Diedrick scored 26 (her second personal best) and Aliana Scafe with two goals. This match had the highest total score with a cumulative score of 67 goals between the two teams.
The Bronze Medal match saw Middle Region defeat Cayhill 34–28 with both teams scoring the second highest number of accumulated goals of the tournament, namely 62. Both of Middle Region’s scorers scored their personal best in this match, with Ashley Lake scoring 21 goals and Ariel Goberdhan scoring 13 goals.
The match started with Cayhill taking a slight lead over Middle Region in the Q1 7-1 and Q2 15-14. Q3 started with Middle Region making a tactical adjustment by switching the Centre and Wing attack positions, a change which paid off. Middle Region turned the tide by taking over the lead in Q3 25-21 and maintaining it to beat Cayhill 34–28. For Cayhill, Azareah Bontiff scored 15 goals and Kalissa Etinof scored 13.
Minister of Education, Culture, Youth and Sports (ECYS) Rodolphe E. Samuel was in attendance for the finals and gave congratulatory remarks to the teams and all the players in general as well as to the coaches and board of the Sint Maarten Netball Association.
Minister Samuel also presented the trophies to podium teams. The Minister expressed his delight at seeing the enthusiasm and skill the players displayed. Also, in attendance was Member of Parliament (MP) Angelique Romou, who also gave a short address to participating players.
The individual winners for the Netball Community League were as follows: Best Defence Player Natasha Busby (Goal Defence St. Peters), Best Goal Shooter Tikeha Bourne (Goal Shooter Dutch Quarter), Best Mid Court Player Albers O’Reilly (Centre Dutch Quarter), Most Outstanding Player of the Tournament Lean Ford (Goal Attack Dutch Quarter) and Most Valuable Player (MVP) of the finals, Lean Ford (Goal Attack Dutch Quarter).