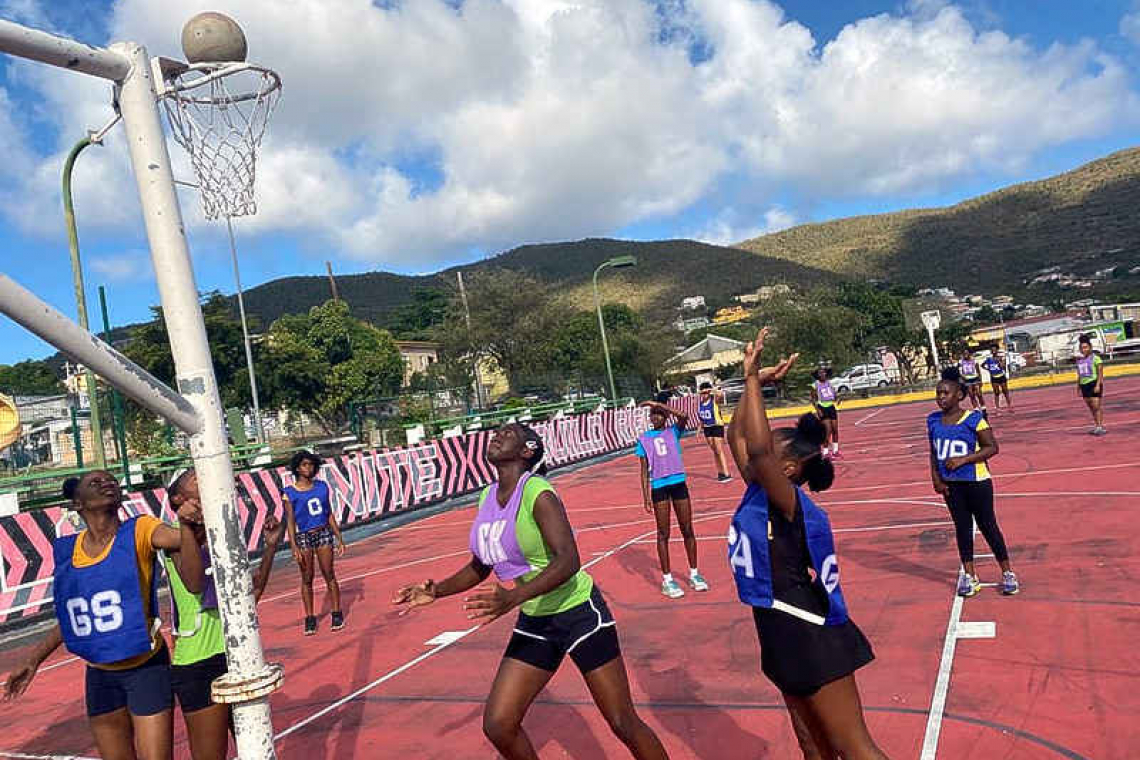 Dutch Quarter is undefeated with four wins and no losses. They have scored 104 goals and only allowed 50. In Second place is St. Peters with three wins and one loss.
Three matches were played Easter Sunday.

St. Peters 30 – Cole Bay 6
In the first match of the day Cole Bay trying for their first win of the tournament against St. Peters. St. Peters dash Cole Bay’s hopes from the first quarter with a lead of 8-0. St. Peter’s outscored Cole Bay every quarter by at least 2 goals and maximum 8 per quarter. T
This was the first match Cole Bay scored more than 5 goals. Tyler Timothy scored twice and Melissa Hardy had four goals.
For St. Peters Natasha Busby led the offense with 16 goals and Shervanna Diedrick complemented with 14.

Simpson Bay 10 – Middle Region 8
In the second scheduled match Simpson Bay still smarting from their last two defeats came out eager to win against Middle Region. The match was defined by strong defense from both sides resulting in a low scoring.
The match was tight with the score being tied in the 2nd and 3rd quarter at 4 and 7 points respectively.
Ultimately Simpson Bay persevered and outscoring Middle Region 3-1 in the last quarter to win the match 10-8. Simpson Bay’s Melissa Hardy scored 6 goals while her teammate Rhianna Fuller scored 4.
For Middle Region Ashley Lake scored 5 and Ariel Goberdhan scored 3 goals.

Cay Hill 13 – Dutch Quarter 37
In the last match of the day Cay Hill and Dutch Quarter met. Cay Hill was hoping to be the giant slayer that would beat Dutch Quarter who, up to that time, was undefeated in the tournament. It was a very exciting game and both teams played well from the onset. The first quarter Dutch Quarter took the lead 9-6 and maintained it for the second quarter 16-10.
This gave Cay Hill some hope they would be able to get back in the match. Dutch Quarter was having none of that and after the half time basically silenced Cay Hill’s offense allowing them only 3 goals in the third and fourth quarter while their offense garnered 21 goals.
Cayhill’s Azareah Bontiff scored 8 and Kalissa Etinof scored 5 goals.
For Dutch Quarter’s Tikeha Bourne and Lean Ford scored respectively 22 and 15 goals. Dutch Quarter is now undefeated in four matches.

After four match days the standings are as follows: Dutch Quarter is in a solid first place with four wins 20 points followed by St. Peters 3 wins 1 loss with 17 points. Simpson Bay and St. Peters both have 14 points from 2 wins and 2 losses. Simpson Bay based on points ratio is in 3rd place while St. Peters takes the 4th place. Middle Region is now in 5th place with 1 win and 3 losses. Closing the lineup is Cole Bay with three points from 4 losses and zero wins.