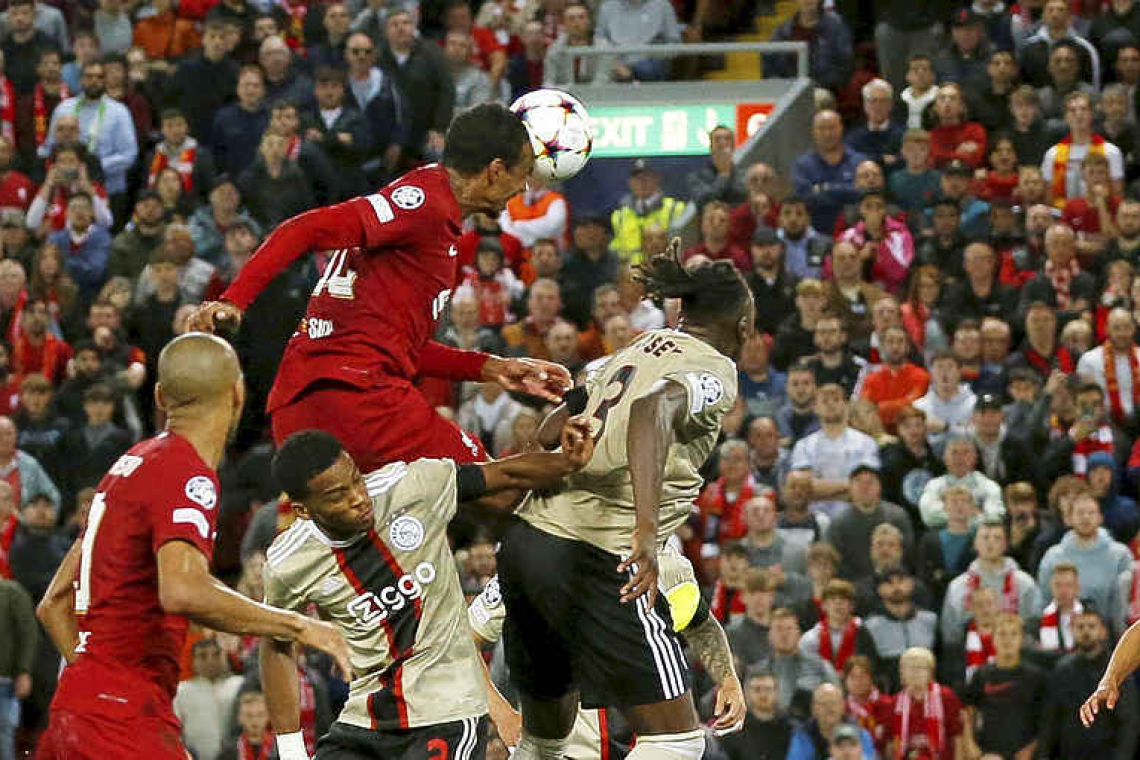 LIVERPOOL, England--Liverpool's Joel Matip headed in an 89th-minute winner as last season's runners-up left it late to beat Ajax Amsterdam 2-1 in their Champions League Group A match at Anfield on Tuesday.

Juergen Klopp's side had lost their opening game in the group 4-1 at Napoli and were heading for another disappointing result until the centre back rose to meet a corner which appeared to be cleared off the line, but the assistant referee raised his flag to indicate a goal.
It was an improved performance from the English team but one which was still far below their best.
Mohamed Salah fired the home side ahead in the 17th minute after being picked out by Diogo Jota, the Egyptian beating Ajax keeper Remko Pasveer with a trademark finish.
But the lead lasted just 10 minutes before Ajax pulled level with a stunning strike from Mohammed Kudus who worked himself some space in the box before hammering the ball into the top corner.
Liverpool responded well to the setback though with Virgil van Dijk forcing Pasveer into action with a firm header from a Trent Alexander-Arnold corner in the 35th minute.
Alexander-Arnold then went close himself -- bursting into the inside-right channel, he cut inside on to his left foot and fired a shot straight at Pasveer’s chest and then the Ajax keeper reacted well to keep out the follow-up shot.
Liverpool enjoyed the bulk of pressure after the break but Ajax fullback Daley Blind wasted a great chance to put the Dutch side ahead when he was left unmarked at the back post but headed wide.
Substitute Darwin Nunez should have won the game for Liverpool in the 83rd minute after he was slipped in by Salah but the Uruguayan striker scuffed his shot wide from a great position inside the box.
A deflected effort from Salah then struck the post before, from the resulting Kostas Tsimikas corner, Matip rose to head in the winner.
Liverpool will be relieved simply to have got the three points on the board after a difficult start to the season.
There will also have been some relief among club officials and the broader English football community that there was no chanting or booing during the pre-match tribute to Queen Elizabeth.
There had been some concern that some Liverpool fans, who had booed Prince William at Wembley Stadium in May, would not respect the ‘period of silence’.
There was no serious disruption although a few isolated shouts did interrupt the silence which lasted only 25 seconds, rather than the usual one minute.