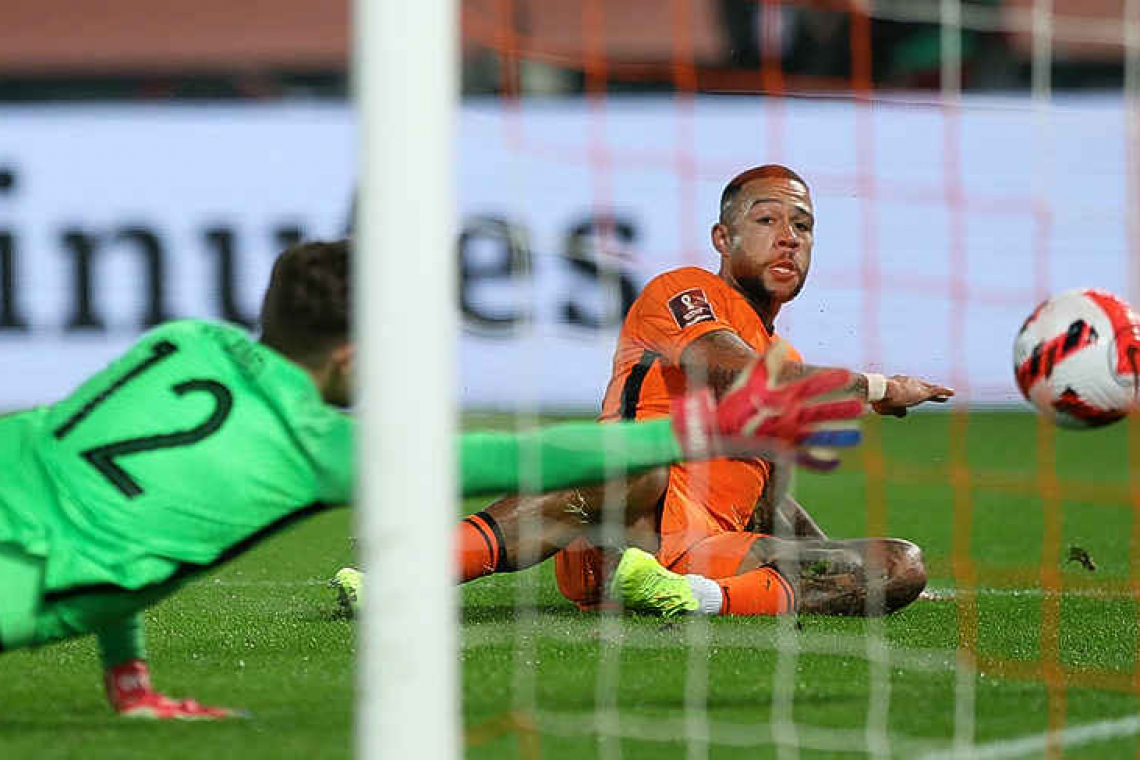 ROTTERDAM- - Netherlands forwards Steven Bergwijn and Memphis Depay struck late to send their country into the 2022 World Cup with a 2-0 home victory over Norway on Tuesday as Group G winners.

Bergwijn hammered home a right-foot shot in the 84th minute that flew into the net to the relief of the home side and Depay made sure of the points as he clinically finished a breakaway after being set up by Bergwijn deep in stoppage time.
The Dutch will return to the finals, hosted by Qatar, after missing out on the 2018 tournament in Russia but with little conviction after limping through their last two qualifiers.
They had been eight minutes from securing early qualification on Saturday before giving up two goals to draw in Montenegro but Tuesday’s victory in an empty stadium due to COVID-19 restrictions was enough to top the group.
The Netherlands finished with 23 points from 10 games, two more than Turkey, who won 2-1 away to Montenegro to secure a playoff spot. Norway missed out by ending third with 18 points.
The Dutch dominated possession and had several half chances with Depay their most enterprising player.
But they also played with an edgy approach, eager to avoid mistakes that would allow Norway to snatch the game away.

Under Control
"I think we had the game under control for the entire 90 minutes. The players executed our plans perfectly," said coach Louis van Gaal.
"It was deserved in the end," added Depay. "We had it in our own hands. It wasn't our best game but nobody cares about that now."
The Norwegians, without injured talisman Erling Haaland, would have had to win to secure a top-two finish and showed some enterprise in the last quarter but they still failed to get any efforts on target.
"It was dangerous at 0-0 and we had to be careful but we were solid at the back," Depay told Dutch NOS television.
Depay's 12th goal of the campaign tied him with England's Harry Kane in the European qualifying scoring charts.
The absence of fans did not help the home cause.
The game was played behind closed doors at De Kuip after the Dutch government at the weekend barred spectators from major sporting events for the next three weeks in an effort to contain a rapid surge in COVID-19 cases.
Van Gaal was also missing from the dugout. He fractured his hip falling off his bicycle on Sunday and sat in a wheelchair in the VIP area, high in the stands, communicating via mobile with his assistants on the bench.