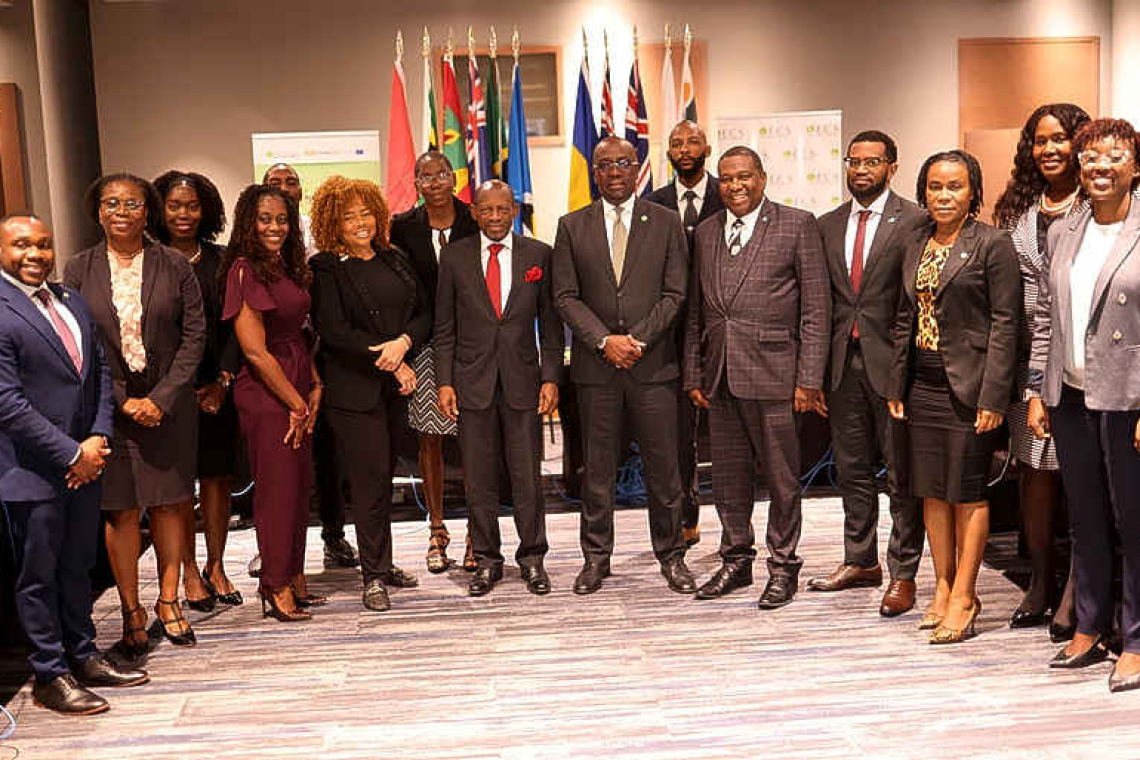 Ministers at the OECS CoM-Trade meeting.

ST. JOHN’S, Antigua--Ministers of trade from the Organisation of Eastern Caribbean States (OECS) convened for the fourth meeting of the OECS Council of Minsters: Trade (CoM-Trade) at the Royalton Hotel in Antigua and Barbuda, on November 24, 2022. The meeting was held under the Chairmanship of Minister for Foreign Affairs, Trade and Immigration of Antigua and Barbuda Everly Paul Chet Greene.

Notable at the meeting were steps taken by the ministers to strengthen trade policy coordination in the OECS and to advance the implementation of the OECS Economic Union. With regards to the latter, this will be achieved through the operationalisation of the customs union with free circulation of goods, and the removal of barriers and restrictions to the establishment and supply of various services by nationals of OECS member states.

The Director of the Division of Economic Affairs and Regional Integration EARID Jacqueline Emmanuel-Flood underscored the importance of having regular meetings of the council that are “…serviced effectively by the commission and by senior officials with reports, technical papers with analysis and recommendations for the effective fulfilment of their mandates under the Treaty.”

In his remarks, OECS Director General Didacus Jules further emphasised the importance of the work of the council, and pledged the support of the OECS Commission in ensuring its effective functioning.

The director general also highlighted the importance of the work of the council on trade policy coordination. He referenced the high level of trade openness of the OECS measured as the sum of exports and imports as a share of overall gross domestic product (GDP) which averaged 106% for the last five years to 2021 and pointed to the overall trade to the overall trade performance of the region in which the overall balance of merchandise trade was in deficit averaging EC$6.9 billion for the last five years. This he indicated were clear signals that the OECS “needs to find ways to reduce our import bill and to expand and diversify our exports of both goods and services”. Recalling the commitments under the Revised Treaty of Basseterre to coordinate trade policy, Jules further remarked that, “Strengthening trade policy coordination at the OECS is… an important point of departure for this meeting of the Council and the work that lies ahead.”

Minister for Foreign Affairs and Foreign Trade of St. Vincent and the Grenadines and outgoing chair Keisal Melissa Peters expressed her pleasure and pride at the level of OECS participation in the recently held WTO Ministerial Conference (MC12) and the outcomes that were achieved during her tenure.

“We were able to identify our key interests and concerns among the issues on the agenda for MC12 and to identify the positions that we would articulate in the various groups and negotiations sessions along with our fellow [Caribbean Community – Ed.] CARICOM colleagues and wider coalition and alliance partners in the ACP, SVEs and other groups.”

Incoming chair Chet Greene in his opening address gave a broad overview of the trade policy issues confronting the OECS given the background and current context including recent economic and environmental shocks. He noted that: “The OECS…continues to be highly vulnerable to various exogenous economic, environment and climatic shocks that challenge their attainment and maintenance of sustainable economic growth.”

The chair also stressed the importance of leveraging trade for economic growth and development through “the fundamentals of trade competitiveness and trade expansion and diversification” given that “competitiveness and supply-side constraints continue to be a factor as well as non-tariff barriers and other regulatory and institutional hurdles in the export market” for the OECS.

In their substantive deliberations – based on recommendations received from their Senior Trade Officials who met on November 15, 2022 – the CoM-Trade delivered the following important outcomes: The adoption of a structured and standardised agenda to guide and focus the conduct of their ordinary meetings which they agreed to convene regularly twice a year; Endorsement of the establishment of an OECS Trade Policy Committee made up of technical officials and private sector representative who would provide the Council with advice and recommendations for their deliberations and decision making; Recognition of the importance of the private sector in the trade policy coordination process, therefore the endorsement of the recommendations for a six year OECS Regional Private Sector Trade Facilitation and Engagement Strategy that would improve the private sector’s involvement in efforts to enhance trade facilitation.

Further, they reach an agreement to reactivate, revitalise and reconstitute the institutional framework consisting of the national working groups, the regional working group and sub-committees to reignite the momentum and drive the work towards completion of the customs union; and an agreement to a strategic approach for the revision of implementation timelines in the OECS five year action and implementation plan for the harmonisation of the OECS legislative and regulatory regime for a priority set of services including the removal of restrictions and barriers to trade.

In addition to these significant outcomes, the council also reviewed the outcomes of the 12th session of the WTO Ministerial Conference held in June 2022 and agreed on how the OECS would engage on the implementation of the outcomes and further work to be done through the OECS Mission in Geneva.

In closing the meeting, Minister Greene thanked his colleague ministers and technical team, the OECS Commission, and his own team for quality of work that contributed to what he believed was a successful meeting reflected in the outcomes that were achieved. He also pointed to the important role of the private sector in trade policy making and looked forward to their participation in future meetings of the council. ~ OECS ~