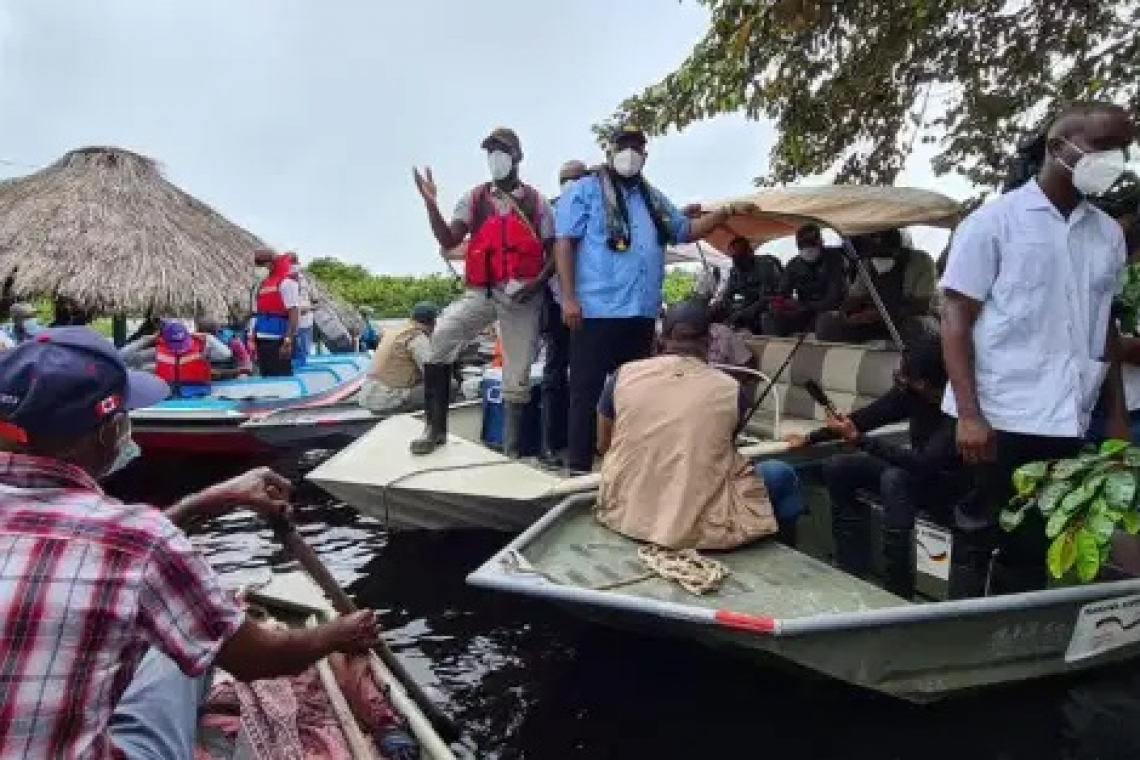 BERBICE, Guyana--President Dr. Irfaan Ali announced on Wednesday that the Civil Defence Commission (CDC) has advised that the flood situation across the country is now a Level 2 Disaster.

The Head of State made this disclosure as he addressed residents of Chesney New Housing Scheme during the second day of his outreach activities in Regions Five and Six.

“The CDC advised this [Wednesday – Ed.] morning that the disaster is a Level 2 Disaster so that we can now move the situation to the international community to get international support.”

According to the Caribbean Disaster Emergency Management Agency’s (CDEMA’s) Regional Response Mechanism, a Level 2 Event is one in which the national capacity to respond is not overwhelmed, but some external assistance is required. The affected State may or may not declare a disaster. In this scenario, the CDEMA Coordinating Unit may provide technical assistance, specialised equipment, support personnel and information sharing.

In comparison, a Level 3 Event overwhelms the capacity of an affected State to respond.

Team on the ground

The president used the opportunity to assure the residents that government is working assiduously to address their concerns.  He said that the government will propose a supplementary provision for Parliament to secure additional resources to support the efforts.

We will be helping

Prior to his stop in Chesney, the Head of State began Wednesday’s outreach activities in Fyrish, where he reassured residents there that every single community in every region affected by floodwaters, including their community, would be aided.

The president explained that the immediate needs in many of the flood-affected communities are to ensure that residents have access to food, shelter as well as healthcare. He added that the worst affected are farmers and those who rear livestock.

Regarding the actions being taken by the various agencies, Ali noted that the CDC has already initiated a programme to ensure that food is delivered to affected areas and that medical supplies and shelter are provided.

“We will be working hard to get as much water off of the land as possible; as soon as the water recedes we are going to have a full assessment.”

The Fyrish residents raised several concerns with the president and his team, which the head of state addressed head-on.

The president promised them that the relevant personnel from the various agencies, inclusive of an engineer, a representative from the Guyana Livestock Development Authority (GLDA), among others, would be on the ground to assist.

“Today, [Wednesday], they will tell me what they recommend, and we will see what we can do in terms of the immediate drainage, in terms of food supplies … and the feed. GLDA people will be here with you and the CDC, and once we get the report back today, before Thursday afternoon, you will get the stuff coming in.”

He also instructed that a Hymac excavator be sent into the community by today, Thursday.

During the interactive engagements, officials from the various agencies were able to brief residents in the communities on the progress of interventions in their respective areas.

In his updates to the residents of Fyrish, the minister of agriculture said that prior to Wednesday’s visit, there were a number of teams in Region Six to verify and to also put measures in place to deal with the flooding conditions affecting most Neighbourhood Democratic Councils (NDCs). The ongoing interventions include the excavation of outfalls and canals.

He added that the GLDA officials have been working with livestock farmers to ensure that they take care of their animals.

After Chesney New Housing Scheme, the team made their way to Chesney Old Scheme.

During that stop, the president also updated the residents about the flooding in other areas and promised them support.

“I want you to be assured that the government will be with you throughout this process.”

The president was expected to travel to several other affected communities in Region Six on Wednesday. He had journeyed on Tuesday to a number of riverain communities in Mahaica and Mahaicony. ~ iNews Guyana ~