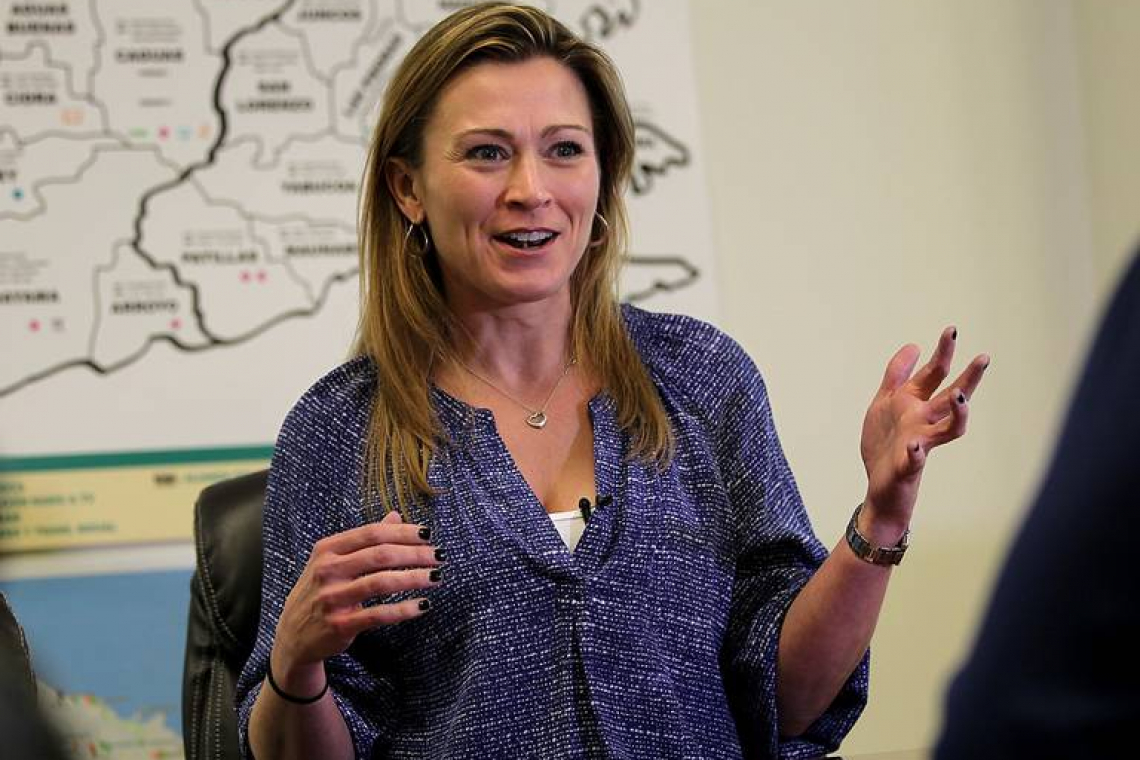 Julia Keleher, then Secretary of Education for Puerto Rico, talks about her plans for the public school system, such as the closure of many facilities, on August 9, 2018, almost a year after Hurricane Maria devastated the Caribbean island. Photo credit: Pedro Portal.

Should the court agree to the sentencing recommendations, Keleher will spend six months in federal prison followed by a year of house confinement. Prosecutors also recommended a fine of US $21,000. The news comes just over two weeks since the former top education official filed a motion to change her plea, which alluded to the deal with the federal government.

Keleher headed the island’s struggling education system from January 2017 until April 2019, during former Governor Ricardo Rosselló’s administration. Rosselló, who resigned during massive protests two years ago after the leak of a profanity-laced group chat, celebrated Keleher’s arrival. He described her as “excellent, extraordinary” and a “professional of global calibre.” Keleher received a salary of about $250,000 in the post.

Puerto Rico’s education system faces massive challenges, including rebuilding infrastructure from hurricane and earthquake devastation, a student population in poverty with a high dropout risk, and a high proportion of children and adolescents who require special education.

Supporters viewed Keleher as new blood in the island government’s largest agency, which had a history of red tape, mismanagement and corruption. But detractors, a group which included teachers and educator unions, blasted the former governor for not appointing a secretary who had experience as a direct employee of the education department or in the local public school system. Many previous secretaries have been administrators or teachers of the agency.

Under Keleher’s leadership, the department planned to invest $44 million in federal funds for professional training and certification for educators. She also led a massive education reform, signed into law in 2018, that aimed to guarantee that every student would receive the same amount of resources to support their education.

But the former official encountered widespread criticism in response to some of her policies. She paved the way for Puerto Rico to open its first charter schools, which landed her in a court battle with a prominent teachers union. Keleher also shut down hundreds of schools during her tenure, which coincided with devastating Hurricane Maria. The government cited declining student enrolment as Puerto Ricans left the island en masse, as a factor that contributed to the closures, but many felt it reduced access to education for affected communities.

The former secretary of education defended her decision.

“Somebody had to be the responsible adult in the room,” she said at an education conference at Yale University.

Keleher stepped down in April 2019, telling island newspaper El Nuevo Día that “it was the moment” to do so, adding that the agency needed another kind of leader. At the time, local media reported that the island’s education agency was under the lens of federal authorities over contract irregularities.

Three months later, Keleher was indicted on charges of wire fraud, conspiracy to commit an offence against the United States, and wire fraud conspiracy in a scheme to use “fraudulently obtained” public contracts to steal federal money along with multiple officials and associates, alleged the Department of Justice. Then, in January 2020, another federal grand jury indicted Keleher on charges of bribery, conspiracy and wire fraud. Keleher allegedly accepted a financial bonus to obtain a San Juan luxury apartment in exchange for over 1,000 square feet of a public school’s grounds to expand a street, according to the indictment documents.

The original charges in the first case were revised in August 2020. The superseding indictment, replacing the original, accused Keleher of 24 counts, including wire fraud, aggravated identity theft, wire fraud conspiracy and bribery.

In the plea agreement, which Keleher signed June 2, she admitted to offering the strip of land to widen a street in exchange for renting the upscale apartment in the Santurce neighborhood for $1. Keleher was also to receive a $12,000 incentive to later purchase a unit in the building.

Should the court accept the deal with prosecutors, remaining charges that haven’t been resolved will be dropped, according to the plea agreement. If the court rejects the negotiated deal, then Keleher would be allowed to withdraw her guilty plea. The sentencing hearing is scheduled for September.

Keleher’s case has reminded many Puerto Ricans of the corruption scandal surrounding another former secretary of education. Víctor Fajardo, once the island’s top education official, was convicted of corruption in the early 2000s. Fajardo, who spent years in prison, stole millions in federal money for personal and political gain.

“It is disappointing that officials such as the former secretary take advantage of the privilege of public service and trust placed in them to serve themselves at the expense of our children and youth,” said Víctor Bonilla, president of the Teachers Association of Puerto Rico, following Keleher’s admission of guilt. “We also trust that this story will not repeat itself and that Julia Keleher is the last [Department of Education – Ed.] DE official we see under these circumstances.” ~ The Miami Herald ~