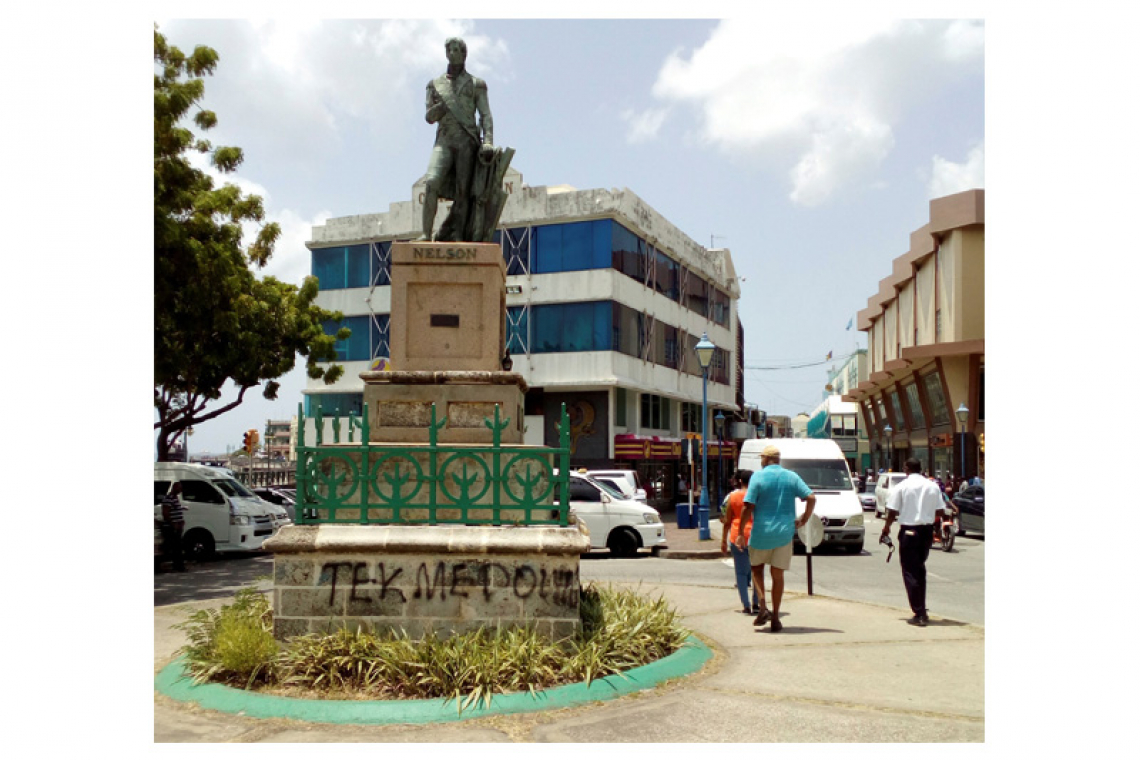 A statue of Royal Navy Vice Admiral Horatio Nelson stands with its plinth vandalised a day after the government of the Caribbean island of Barbados said it wished to remove Britain’s Queen Elizabeth as its head of state and become a republic, in Bridgetown, Barbados, on September 16, 2020. File photo credit: Reuters/Nigel R. Browne.

LONDON, England--Barbados, a former British colony, will next week ditch Queen Elizabeth as head of state, breaking its last remaining imperial bonds with Britain nearly 400 years since the first English ship arrived at the Caribbean island.

Barbados casts the removal of Elizabeth II, who is queen of Barbados and 15 other realms, including the United Kingdom, Australia, Canada and Jamaica, as a sign of confidence and a way to finally break with the demons of its colonial history.

“This is the end of the story of colonial exploitation of the mind and body,” said Professor Sir Hilary Beckles, a Barbadian historian. He said this was an historic moment for Barbados, the Caribbean and all post-colonial societies.

“The people of this island have struggled, not only for freedom and justice, but to remove themselves from the tyranny of imperial and colonial authority,” said Beckles, vice-chancellor of The University of the West Indies.

The birth of the republic, 55 years to the day since Barbados declared independence, finally unclasps almost all the colonial bonds that have kept the tiny island in the Lesser Antilles tied to England since an English ship claimed it for King James I in 1625.

It may also be a harbinger of a broader attempt by other former colonies to cut ties to the British monarchy as it braces for the end of Elizabeth’s nearly 70-year-old reign and the future accession of Charles, who will attend the republican celebrations in Bridgetown.

Barbados’s move is the first time a realm has removed the queen as head of state in nearly 30 years: Mauritius, an island in the Indian Ocean, proclaimed itself a republic but remained in the Commonwealth, an association of mostly former British colonies, which is home to 2.5 billion people.

Buckingham Palace says the issue is a matter for the people of Barbados.

Barbados received 600,000 enslaved Africans between 1627 and 1833, who were put to work in the sugar plantations, earning fortunes for the English owners.

“Barbados under English colonial rules became the laboratory for plantation societies in the Caribbean,” said Richard Drayton, a professor of imperial and global history at Kings College, London, who lived in Barbados as a child.

“It becomes the laboratory for slave society, which is then exported to Jamaica and the Carolinas and Georgia after that.”

More than 10 million Africans were shackled into the Atlantic slave trade by European nations between the 15th and 19th centuries. Those who survived the often brutal voyage ended up toiling on plantations.

While full freedom was finally granted in 1838, the plantation owners preserved considerable economic and political power might into the 20th century. The island gained full independence in 1966.

Prince Charles, the 73-year-old heir to the British throne, will travel to Barbados for the ceremonies marking the removal of his 95-year-old mother as head of state.

Barbados will remain a republic within the Commonwealth, a grouping of 54 countries across Africa, Asia, the Americas, Europe and the Pacific that has always been a priority for Elizabeth, who heads it.

Though its name will remain simply Barbados, its removal of the queen may well sow the seeds of republicanism further across the Caribbean, according to Drayton.

“This will have consequences particularly within the English-speaking Caribbean,” said Drayton, who pointed to talk of a republic in both Jamaica and St. Vincent and the Grenadines.

“The queen has had an enormous personal relationship to many of these countries and has shown her own commitment to the Commonwealth vision, which she inherited from that imperial moment of the 1940s and 1950s, so I do think that in the wake of the queen’s passing that some of these questions would become more urgent in places like Canada and Australia.”

The queen has made many visits to Barbados and, according to Buckingham Palace, has had “a unique relationship with this, the most easterly of the Caribbean islands.”

The republic of Barbados will be declared at a ceremony which begins late in the evening on Monday, November 29, at the National Heroes Square in Bridgetown.

“The time has come to fully leave our colonial past behind,” Prime Minister Mia Mottley said in a 2020 speech prepared for Governor General Sandra Mason, who will replace Elizabeth as Barbados’ head of state after being elected president.

“This is the ultimate statement of confidence in who we are and what we are capable of achieving.” ~ Reuters ~