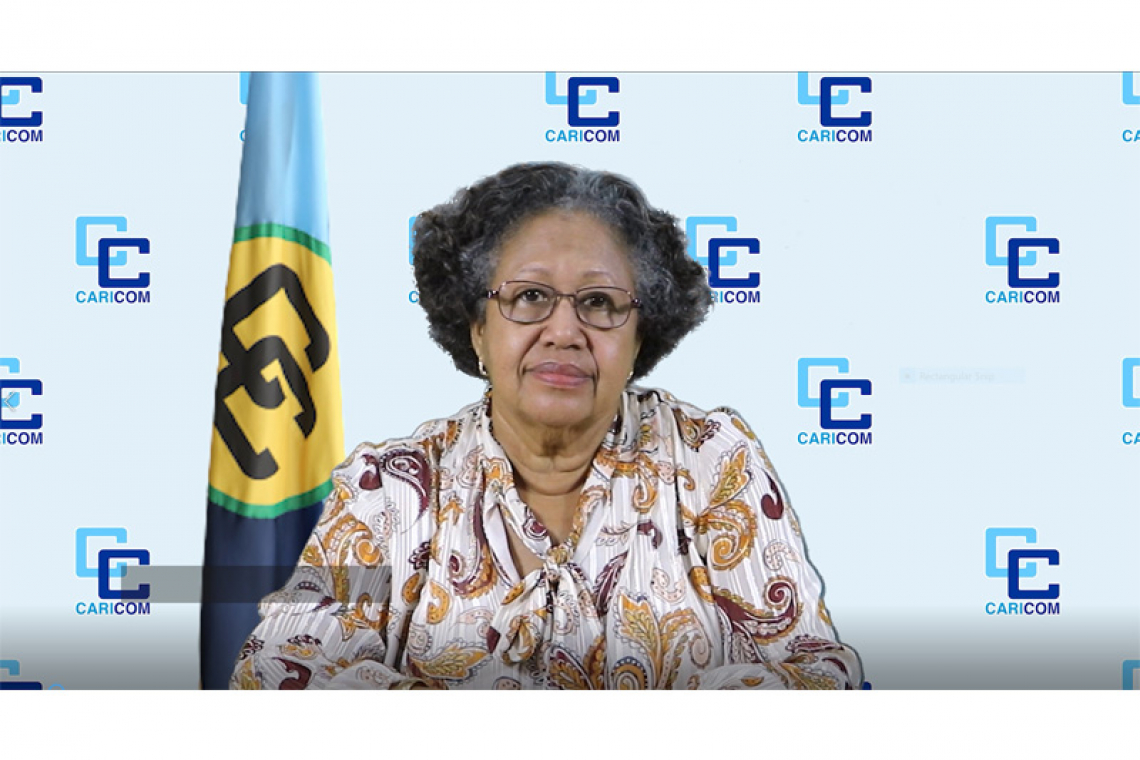 GEORGETOWN, Guyana--As the Caribbean Community CARICOM joined the world in observing the beginning of the Sixteen Days of Activism against Gender-based Violence campaign, on November 25, Secretary General (SG), Dr. Carla Barnett called for comprehensive and inclusive policy approaches in addressing all forms of violence against girls and women.

In a message to mark the international observance, Dr. Barnett urged the people of CARICOM to join in solidarity with the United Nations (UN) in playing a part to “Orange the World and End Violence against Women now”, as she underscored the theme of this year’s observance.

The promotion of the colour orange in this year’s observance symbolises a “brighter future for women and girls,” and calls for a coalescing of minds to ensure that one day, women and girls will live free of violence, the SG said.

Highlighting the pervasiveness of violence against women, Dr. Barnett pointed to data stating that one in three women has experienced physical and or sexual violence at some point in her lifetime, usually from an intimate partner. She also referenced data on the Caribbean Region from five CARICOM Member States, which indicate incidence rates as high as one in every two women.

“This year’s observance highlights the disproportionate impact the COVID-19 pandemic has had and continues to have on women,” the secretary general stated, adding that the pandemic has resulted in the rapid escalation of all forms of violence against women and girls, to which the world was unprepared to respond.

Using her statement to highlight the plight facing adolescent girls, she said they faced increasing risk for sexual exploitation with loss of household income and school closures.

“The United Nations International Children’s Emergency Fund (UNICEF) maintains that globally one in four women was a child bride. UN Women reminds us that the economic fallout is expected to push 47 million more women and girls in Latin America and the Caribbean into extreme poverty in 2021, thereby reversing decades of hard-fought progress in our Region,” Dr. Barnett said, underlining the severity of the crisis facing women and girls.

Against that backdrop she applauded women’s rights organisations, including civil society groups that have responded to the vulnerabilities facing women and girls, which the COVID-19 pandemic exacerbated.

Those groups, she added, have been at the vanguard in providing early warning throughout the pandemic, and in making efforts to integrate into COVID-19 response plans, services for at-risk women and girls.

The full text of the secretary-general’s statement can be read at:

https://caricom.org/message-from-the-secretary-general-of-the-caribbean-community-dr-carla-n-barnett-in-observance-of-the-16-days-of-activism-campaign-against-gender-based-violence-25-november-10-december-2/ and her message can be heard on the CARICOM YouTube page at: