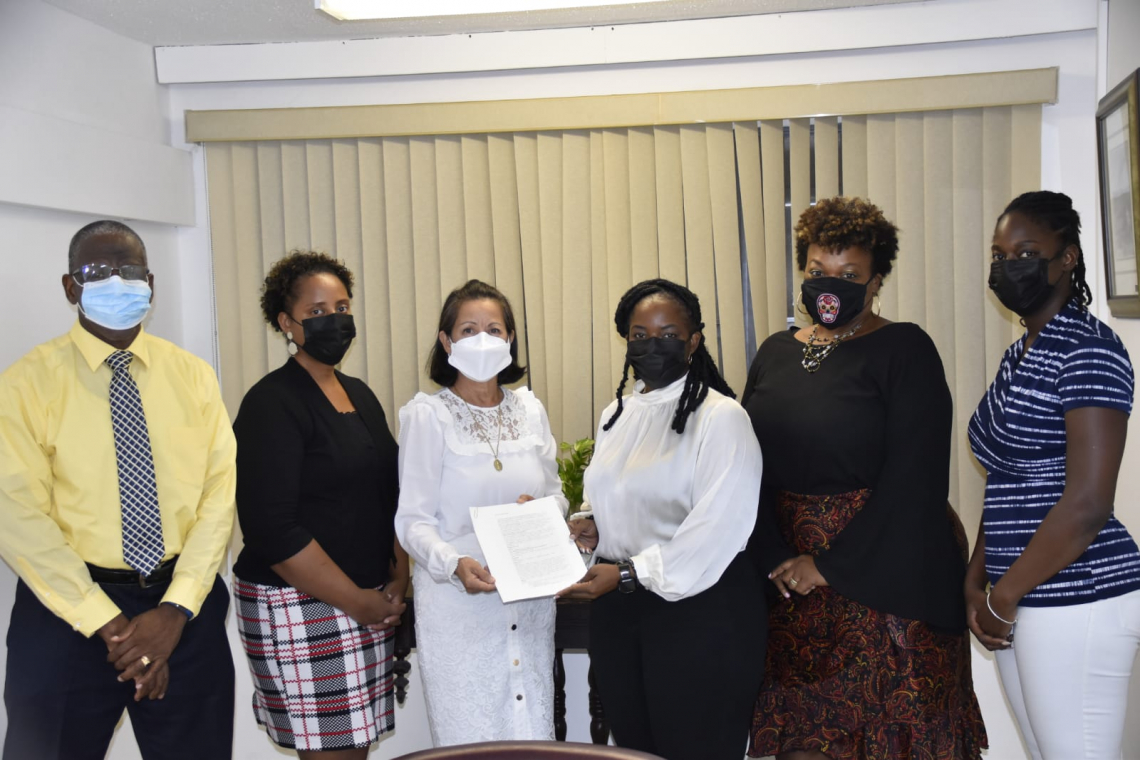 PHILIPSBURG--“I am elated for the establishment of the much-needed Victim Support St. Maarten Foundation,” said Minister of Justice Anna Richardson, under whose leadership the support for victims of crimes is coming to fruition. “This is a step in the right direction and a milestone for the community of St. Maarten.”

VSS was established to supervise victims of life crimes; serious car accidents and burglaries and break-ins with severe force, violence or the use of a firearm or other weapons. It will function in close collaboration with three official bodies to ensure the proper functioning of the foundation: the Ministry of Justice via the Foundation Judiciary Institutes Windward Islands SJIB Probation Service, the Prosecutor’s Office, and the St. Maarten Police Force KPSM.

Victim support has been a void in our community for many years, Richardson said. “As I kept hearing the many stories of persons who have been through a traumatic experience, I ensured that this initiative remained one of the Ministry of Justice’s top priorities. I have total confidence in the board of individuals who are well aware of the support needed.”

The board members will undergo training to ensure the foundation is functioning at the level required to provide optimal service, Richardson stated. “I’d like to thank the Ministry of Justice, the VSS board, the notary and my cabinet staff for the commitment and support rendered so that the foundation could become a reality for the people of St. Maarten.”

Richardson ensured that VSS will offer high-quality shelter and assistance to victims who have been subjected to crimes which, according to the legal definition, are punishable by at least six years’ imprisonment. Victims of road crashes can also seek help from VSS. The assistance provided is not process-based or psychotherapeutic in nature. VSS will only support the victim if he or she deems it desirable and insofar as the victims cannot handle these matters themselves.

VSS will assist victims by providing emotional support as soon as possible after the offence has been committed. The team will accompany victims during criminal proceedings and provide practical assistance. VSS will represent the interests of the victim in obtaining compensation. Assistance can also be focused on mediating the conflict between the perpetrator and the victim.

A team member will be checking and identifying whether the victim is recovering and suggest opportunities for improvement where necessary.

Richardson explained that VSS is currently finalising its working protocol, which will serve to map out the tasks and standard operating procedures of the organisations and entities involved.

“It will also describe and streamline the work processes with regard to victim support from the start of the criminal process to the end, so that victims are properly and efficiently assisted at every stage of the criminal proceedings process,” she said. “Police and the Prosecutor’s Office already assist victims in practise in various areas, from providing general information to referring the victim to professional institutions. This care, and with it the range of duties, is expanded with the present protocol.”

In preparation for the establishment of the foundation, board president Cassandra Richardson attended a conference at Acoya Resort in Curaçao on August 26. The theme concerned the sexual assault of and preying on minors. Three presenters discussed topics geared towards the prevention and overcoming of victimhood in incidents where children are targeted.

The intended audience were those involved in providing emotional support and care to victims such as front-line workers, social workers and persons working with victim support services. The event was well attended by professionals from all six islands.

Minister Richardson said, “The attendance for St. Maarten was especially noteworthy with the newly-established victim’s support services. The coordinators of the event premiered a film concerning what to expect from departments of justice such as police and prosecutor’s office for persons who are victims.”

VSS president Cassandra Richardson built most of her academic and working career in the United States and Canada. She holds a Bachelor’s degree double majoring in Communications with an emphasis in Journalism and Environmental Science from the University of St. Catherine’s in St. Paul, Minnesota, and two Master’s degrees, one in Social Work and the other in Communication and Social Justice, both from University of Windsor in Windsor, Ontario, Canada.

Cassandra Richardson served as executive director of Safe Haven Foundation, a domestic violence shelter for women experiencing intimate partner violence. She also filled the position of counsellor and therapist to women and their families that are victims of domestic violence. She is an educator on gender-based violence, an advocate for gender equality and children and youth rights in her St. Maarten community and a proponent of access to programmes and opportunities alleviating the poverty of vulnerable groups.

Isaac Harold Richardson has served on the boards of various education, political and religious organisations and looks forward to working and being a part of VSS because it has to do with victims; people who have been violated or who have no one to speak on their behalf. He brings a heart of compassion and love for people in general. Whatever it takes to encourage and let people know that there is hope at the end of the tunnel, he stands ready to serve them.

Roxanne Howell holds a Bachelor’s degree in Business Economics in Financial Accounting and brings with her 20 years of experience in the financial sector. She has been working for the government of St. Maarten for the past 10 years as the financial controller for the Ministry of Public Health, Social Development and Labor VSA and now serves as the concern controller for the Ministry of Finance as of June 2021.

Howell believes that VSS is a great initiative, as many times people go through certain experiences and tend to forget the trauma that comes afterward. During a traumatic experience, it is imperative that victims have support that they are able to access and rely on. She trusts that with the establishment of VSS, this platform will now allow victims to be heard.

The Ministry of Justice together with VSS will soon be launching the foundation’s management and staff positions, as well as a call for volunteers, Minister Richardson announced. “The staff and volunteers will undergo training in order to be equipped in dealing with traumatic situations for their clients. The community may look forward to more information and being advised as soon as the VSS website is launched.”