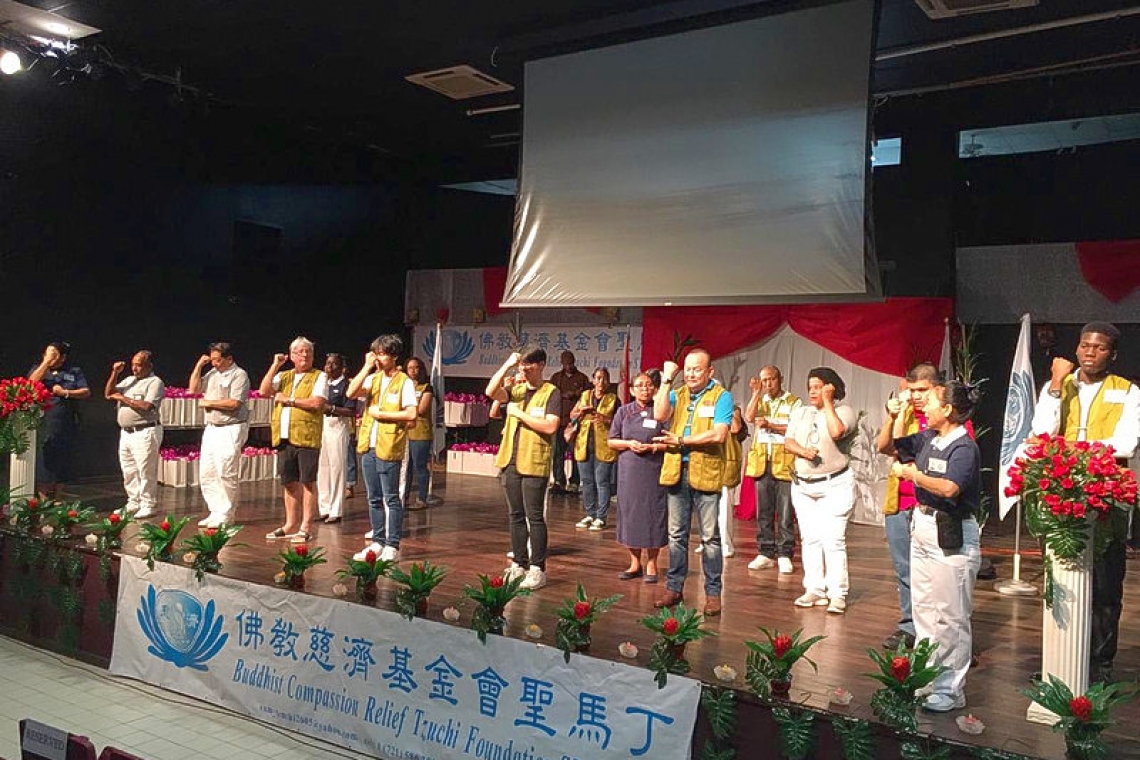 Volunteers performing during the event.

The packages being donated to recipients.

A section of the packed audience.

The 55 volunteers who participated in the event assisted in distributing the packages, each of which contained a box of multi-grain raisin almond cereal, a pack of Club Social biscuits, Nido milk powder, a bottle of jam, Chinese plum and mints.

The 175 attendees to the event were treated to a packed programme. The event opened with seniors from the Home Away From Home Taking Care of the Elderly Foundation delivering a welcome song.

Volunteer Philip van Delden said Tzu Chi came as a surprise to him. His partner was travelling to Taiwan to become certified as a Commissioner and he decided to accompany her. It was in Taiwan that his eyes opened to the pure love in Tzu Chi. Van Delden said he witnessed humbleness, compassion and love and saw elderly persons with heart and love that he felt growing up in St. Maarten, but that he said is sorely lacking now.

He said St. Maarten seems to be neglected today particularly where it concerns the elderly. “Tzu Chi Foundation has opened a special part of me. It has opened my heart that was closed. I was feeling down and I knew I had something to do and I did not know what, but then I learned the value of giving, even if it’s just a little. Giving of your time to someone is worth millions. Giving is very powerful. Receiving does not make your heart warm, giving does and this is what Tzu Chi stands for,” he said. “We are here to help each other. Each and every one has the capability of helping others,” he added.

Van Delden said many persons are very fortunate, but don’t realise it. He sees the suffering of people when he visits communities. “Tzu Chi Foundation is the way for St. Maarten – it is the way because it is a giving foundation. We have to learn to appreciate what we have and the little that we can spare, give it to someone else.”

A member of the Home Away From Home Foundation said thanks to Tzu Chi, the foundation’s members had started a recycling programme “to save the earth.” He said there are plans to get more persons on board the recycling programme with the goal of wasting nothing and keeping Mother Earth clean. He expressed hope that everyone saves their bottles so that the amount of garbage on the island can be reduced.

The three volunteers who were certified as commissioners in Taiwan in November last year – Regina Janga, Merlyn Schaminee and Hilda Carrasco – spoke about their experiences, what they learned and what they love about Tzu Chi and giving.

A number of recipients also addressed the audience speaking about their circumstances and the assistance they received.

Ishmael Survella, one member of a retired couple on pension, who received help after Hurricane Irma and had her roof repaired by Tzu Chi the day before Christmas, shared her story with attendees. She said she was grateful for the assistance in repairing her damaged roof. “I have no more water coming from my roof and I am very, very happy,” she said in between tears. “No matter where I am, I will never forget the Tzu Chi Foundation.”

She said she had a back operation in which six screws were inserted into her spine and as a result she is limited in what she can do. However, touched by the work of Tzu Chi, she said she will assist in whatever way she can to pay it back and see how she can also assist others the way she was assisted.

Another recipient, Susana Antunez said the ceremony touched her. She said she admired the commitment of volunteers to take care of others and she promised to join the Tzu Chi family when they visit the St. Martin’s Home on the last Sunday of each month.

Another recipient, who shared that she survives and takes care of her daughter and grandchildren on a meagre pension of NAf. 650 per month, said after the programme that she is grateful to Tzu Chi for its assistance to her household.

Tzu Chi Commissioner Sandra Cheung thanks everyone who was involved in making the event a success.