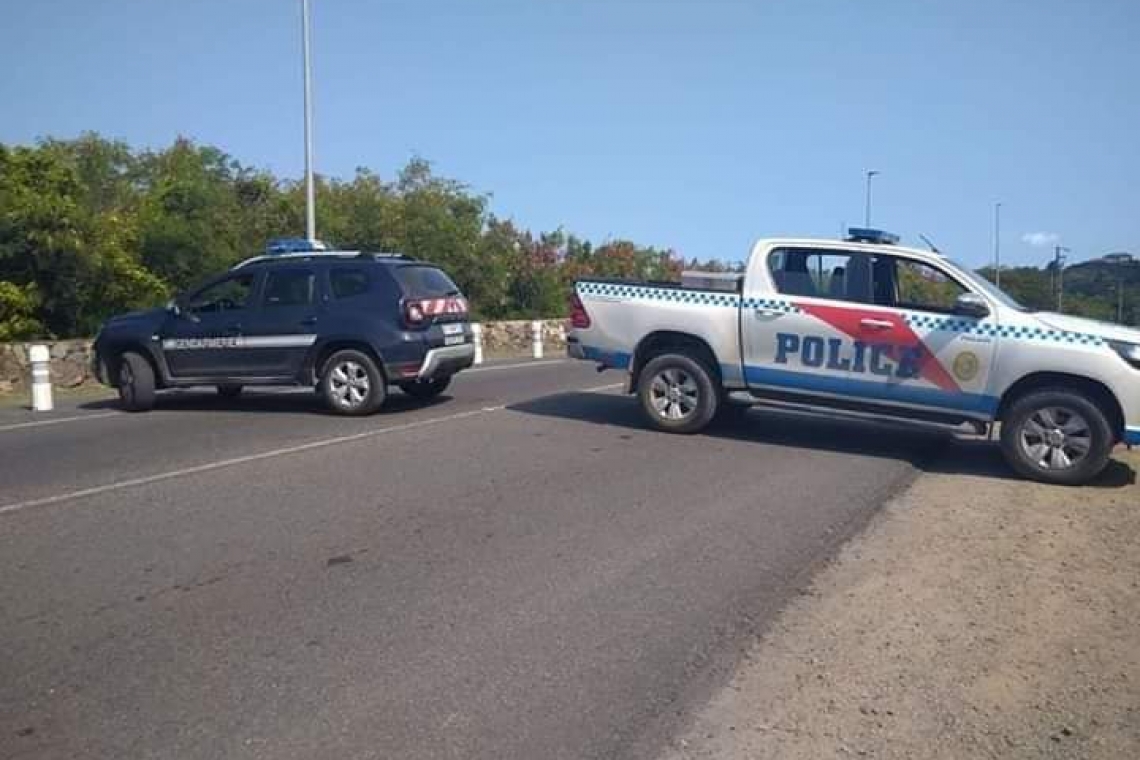 The Gendarmerie and the St. Maarten Police Force KPSM manning the Bellevue/Cole Bay border on Sunday. Photo by Aline Choisy via Facebook.

PHILIPSBURG--Prime Minister and Chairperson of the Emergency Operations Center (EOC) Silveria Jacobs announced in a press conference on Sunday that border crossings during the 24-hour curfew will only be allowed for essential and emergency workers and only at the Bellevue/Cole Bay border and at the Belvedere/French Quarter border. The crossings at Cupecoy and at Oyster Pond are now closed.

The two border crossings that are still open will be manned by both the St. Maarten Police Force KPSM and the Gendarmerie, said Préfète Déléguée Sylvie Feucher during the press conference. Officers will be stationed at these crossings 24 hours per day, she said, adding that because of limited human resources it was decided to physically close the borders at Cupecoy and Oyster Pond.

In order to meet its staffing obligations, Gendarmerie Commandant Stephan Basso said that 16 additional officers were flown in from Guadeloupe on Saturday to augment French-side enforcement measures.

Feucher also said persons crossing the border from the French-side to the Dutch-side will need a document issued by the Préfecture.

This email address is being protected from spambots. You need JavaScript enabled to view it.. Persons can also fill out the form on government’s website and submit it directly. Those travelling during the shutdown without the required documentation risk arrest.

Police Chief Carl John will look into the requests and will send a signed permission document to approved applicants by e-mail. According to John, as of 12:00pm Sunday, he had already received more than 100 requests for movement.