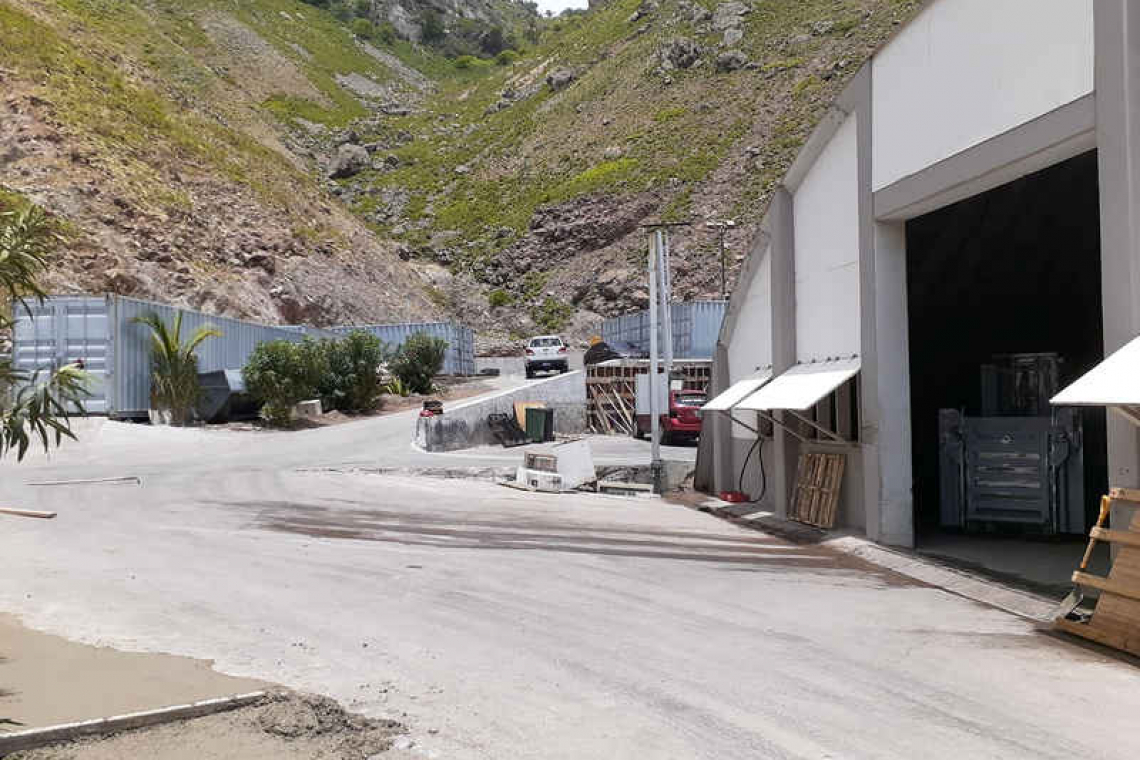 The waste-management facility at Fort Bay.

SABA--The Executive and Island Councils of Saba held a retreat to inform, discuss, and allow the Island Council members to reflect on developments and priorities set in four theme areas: infrastructure; the social domain; policies, projects and legislation; and public service.

During the retreat at Queen’s Garden Hotel, the Executive Council provided an update on the various topics, whereby there was ample opportunity for in-depth discussions and brainstorming with the Island Council members.

Many of the topics will again be discussed in a public meeting of the Island Council slated for late May. In this article is an update on the construction of a new harbour and water bottling plant, the continued upgrading of waste management, and the concept of wastewater treatment.

The COVID-19 pandemic has caused a great delay in the construction of a new harbour. It affected the geo-technical surveys, which now have been completed. Based on the results of the surveys, significant work has been done on model-testing and reference designs.

The model tests show that the impact of the waves on the new breakwater at the new location at Black Rocks is five times lower than at the Fort Bay Harbour.

The environmental impact study, which is important for the building permit to be issued by the Dutch government, is also almost complete. The trials for the coral relocation are also complete. The corals are monitored regularly in two different locations to see which environment is most suitable for their growth.

It is still the intention to start the bidding process for the new harbour this year so that construction can start during the first quarter of 2022. The US-based company ATM is drafting the marina design.

The facilities will be outfitted with industry standards to attract high-end traffic. Discussions are ongoing with the Ministry of Infrastructure and Water Management I&W and the Ministry of Finance for additional funding so that a cargo pier and facility can be tendered during this project.

In the meantime, the construction of a new road to connect to the new harbour continues. Within a month the excavation works should be completed. The Public Works Department will build the retaining and safety walls for this phase of the road.

The road will not be paved until the harbour project nears completion. The second phase of the road is slated to be tendered locally in the near future. The engineering for electricity, water and data is ongoing and these will be in place before the harbour project starts.

The Island Council asked Commissioner Bruce Zagers to further upgrade the overall quality of waste management, to keep working on reducing the output of smoke, and to improve the skills of management and personnel at the waste management facility.

The Executive Council explained that many improvements have been made in waste management with the training of personnel and better separation of garbage.

All plastics are now removed. This has resulted in a reduction of the burning of non-recyclable waste from four to five times per week to once a week, and a larger number of recyclables having to be exported. A scale has been installed at the facility to gather statistics about the waste that comes in.

Additionally, the Island Council has requested the Executive branch to research the possibility of incorporating a compostable material project to mitigate the high volume of materials to be shipped out.

The efficiency of garbage separation has shown that human capacity is not the main challenge for sustainability, but rather the high cost to have the materials removed from Saba. The Executive Council is working on securing additional funds to offset the high shipping cost.

Areas related to garbage collection are still being refined, including a campaign to further educate the community on reducing waste overall by recycling and reusing.

The water bottling plant project was also greatly affected by the COVID-19 pandemic. The bottling machinery is in the building, and the bottles are also present. An important component for the project is an electric switchboard, which has been built in the Netherlands and will arrive shortly. The remaining infrastructural works at the facility are being worked on, after which the manufacturer will finish the installation and commission the plant.

The Island Council indicated during the retreat that it wanted to see more progress in sewage- and wastewater-treatment. A sewage processing plant is part of the second phase of the social-housing complex. The possibility of connecting or expanding to other areas will be looked into.