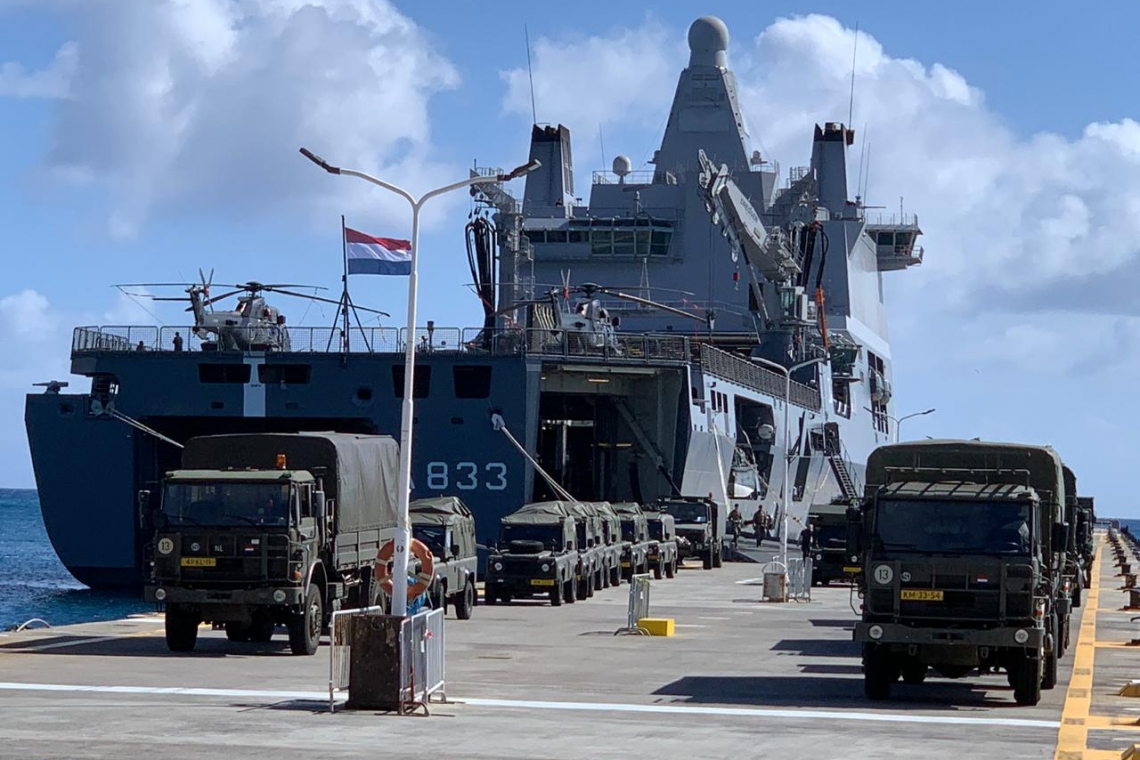 Marines and military vehicles being offloaded in St. Maarten on Friday.

PHILIPSBURG--Royal Dutch Navy ship Zr.Ms. Karel Doorman, the largest ship in the Dutch Navy’s fleet, made her way into Great Bay on Friday morning and berthed at Port St. Maarten. The vessel was deployed to the Dutch Caribbean to help in the current COVID-19 crisis.

The vessel departed for the Caribbean from its home base in Den Helder, the Netherlands, on April 13. The Dutch Ministry of Defence said the plan is for the ship to be deployed for three months, but this could be extended if necessary.

On hand to welcome the ship were representatives of locally stationed marines, the Royal Dutch Marechaussee KMar, and the Dutch Representation Office VNP.

“The ship and crew can support the islands in border surveillance, food security, and help maintain public order if necessary. There are also medical facilities and personnel on the ship – amongst other services – to aid in the corona-crisis,” said VNP in a press release on Friday evening. A medical team with surgical capacity is on board, as well as a medical team for basic care ashore and drones of the Royal Dutch Army and Royal Dutch Navy for image composition.

Prime Minister and Chairperson of the Emergency Operations Center (EOC) Silveria Jacobs said during a press conference on Friday afternoon that Zr.Ms. Karel Doorman can render assistance in treating non-COVID patients in the event St. Maarten’s healthcare system is overwhelmed with coronavirus cases.

“Thus far all the hospitals [on the island – Ed.] have been able to handle it, especially with the additional material that we have received and logistical support and human resources,” said Jacobs.

Zr.Ms. Karel Doorman is – apart from her own capacities as a transport and supply vessel – strengthened with two Cougar helicopters of the Royal Dutch Air Force, which can be used for medical transport and medical evacuations. Moreover, navy units with vehicles and landing crafts are included for transport. If so required, an additional navy unit can be flown in. The vessel also brings along a hurricane emergency package.

France and the United Kingdom (UK) also have a navy vessel deployed in the Caribbean. A coordination cell was set up between these countries in Martinique to cooperate when required. For example, the Zr.Ms. Karel Doorman can provide these vessels with fuel.

A small contingent of Royal Dutch Marines, as well as at least 20 military vehicles, came off the Navy vessel on Friday. These are to assist local law enforcement personnel in enforcing government-issued measures to mitigate the spread of COVID-19. The Daily Herald understands the marines will be lodging at Divi Little Bay Beach Resort.

Police Chief Carl John said during the Friday press conference that reinforcements to augment law enforcement are necessary because police have recently seen an increase in incidents of “criminal activity.” Moreover, he said several officers have been working for nearly four weeks without an off day.

John said law enforcement will be cracking down on movement during night-time hours in response to the increased crime rate. “We will be out there in full force because there are certain activities that we cannot permit to continue,” he said.

He also said police have been seeing increased movement within districts and persons are also gathering in groups more frequently. “This is coming more and more as the days go by,” said John.

When asked by reporters about the number of reinforcements that have arrived, John declined to comment, only saying, “I would prefer to stay away from numbers.” However, the Dutch Ministry of Defence announced in a press release on Friday that, in total, around 50 marines are currently in St. Maarten assisting with maintaining public order.