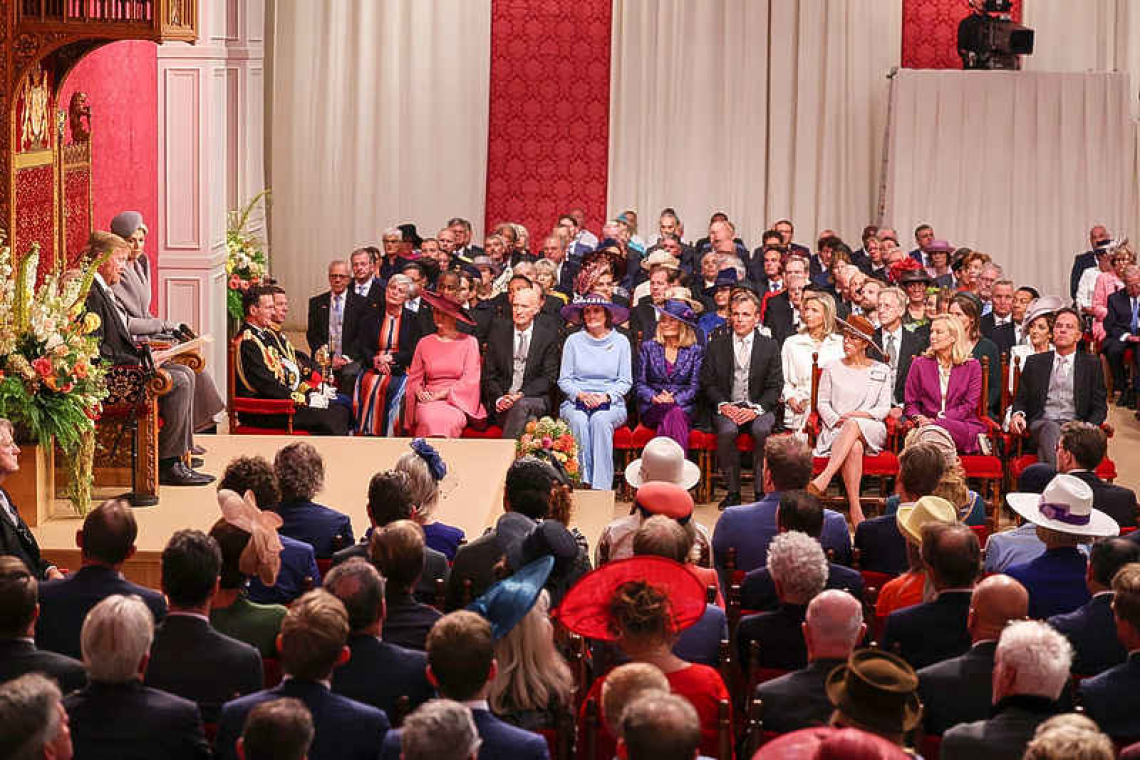 King Willem-Alexander of the Netherlands (left) reads from the 2023 Budget Memorandum with Queen Máxima sitting next to him in the Hague, the Netherlands, September 20. (Reuters/Piroschka van de Wouw photo)

THE HAGUE--The Netherlands is going through a time of “paradox and uncertainty” that has shaken people’s trust in the government’s ability to solve society’s problems, King Willem-Alexander said in his annual Speech from the Throne. The sombre tone of his speech, the centrepiece of the state opening of Parliament, reflected the multiple challenges the cabinet faces: soaring energy bills, rising inflation, the war in Ukraine and farmers’ protests against plans to reduce nitrogen compound emissions.
The royal carriage carrying the King, Queen Máxima and Crown Princess Amalia, attending for the first time since turning 18 in December 2021, was greeted with a mix of cheers and boos on its way from Noordeinde palace to Koninklijke Schouwburg theatre. Some protesters held up inverted flags, which has become the symbol of farmers’ protests.
“It is a paradox that in a period of economic growth and low unemployment, households face a cost-of-living crisis and poverty is on the rise,” the King said in his speech, which was delivered in the theatre while the parliamentary complex is being renovated.
“It is a paradox that people in a free country like ours feel unable to express their opinions for fear of hostile reactions or even threats, and it is concerning that, in a mature democracy such as ours, people are losing faith in the problem-solving power of government and politics.”
The King also said the cabinet felt an “absolute duty” to do justice to people living in Groningen whose homes had been damaged by natural gas extraction, and the families whose lives had been damaged by the childcare benefits scandal that brought down the last government.
“It remains a painful and shameful fact that so many individuals and families face serious problems as a result of mistakes and negligence on the part of the authorities,” he said.
The speech was revised in the hours before it was delivered to include a passage about plans to cap energy prices, after an agreement with utility companies was finalised on Monday night.
King Willem-Alexander said the government would present an “unprecedentedly strong package of measures” worth over 18 billion euros to tackle the cost-of-living crisis, which is expected to include a limited cap on energy bills based on an average household’s consumption.
“It is a painful reality that more and more people in the Netherlands are struggling to pay their rent, grocery bills, health insurance and energy bills,” he said.
The Dutch King said that “Russia’s brutal aggression against Ukraine” threatened the peaceful society the Netherlands had built since World War II and had reinforced the need for unity with the European Union, NATO and the United Nations.
Willem-Alexander also outlined long-term government plans to tackle inequality by raising the minimum wage and benefits while raising taxes on profits and wealth, while higher taxes on gas and oil companies will go towards paying low earners’ energy bills.
He also said the cabinet was still committed to its plans to switch from fossil fuels to “clean energy” and reduce carbon dioxide (CO2) emissions, as well as creating a “new role” for nuclear energy.
The 50% reduction in nitrogen emissions, which has been the focus of farmers’ protests, and a transition to sustainable farming is inevitable, the King emphasised, but he acknowledged this is “understandably an emotive subject for farmers, who fear for the future of their family businesses.”
They needed to be given viable options, such as new working methods, technology, relocation, while in some cases “a buy-out arrangement will be the best option,” according to the King.
More subsidies will be available for homeowners to make their houses more energy-efficient, plans for wind and other renewable energy will be accelerated and the government is aiming to cut off Russian gas supplies completely by the end of the year.
With the 150th anniversary of the abolition of slavery approaching, the King also gave the strongest hint yet that the government was ready to offer apologies for the wrongs of the colonial past.
“If we want a society where there is no place for racism and discrimination, where everyone feels heard and appreciated, we must openly reflect on the less pleasant chapters in our history,” he said. “The government has previously spoken out about the actions of the Dutch authorities during the persecution of the Jews, and about the extreme violence on the part of the Netherlands during the period of decolonisation in Indonesia; as we approach next year’s 150th anniversary of the abolition of slavery, we need to acknowledge this part of our history, too,” King Willem-Alexander said.