Minister Ottley and Port CEO at unveiling of Sun Princess 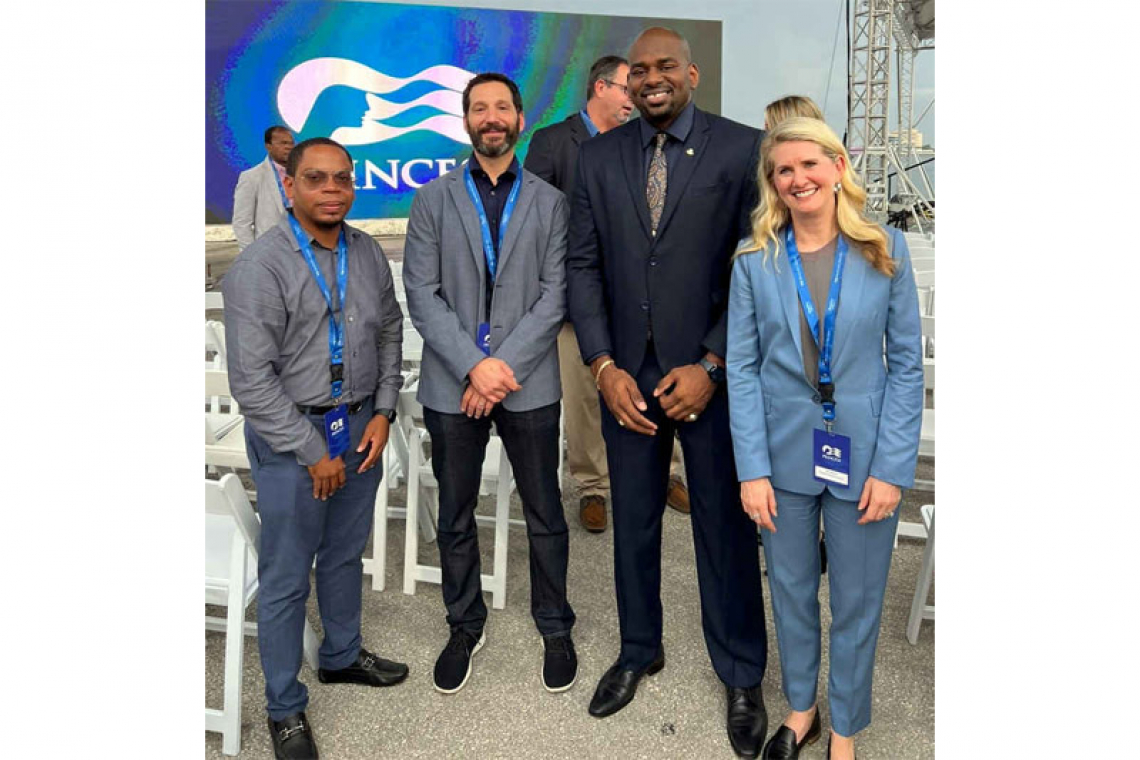 Princess Cruises pulled the curtain back on its first-ever Sphere-class ship at a rainy event at Port Everglades. Sun Princess, currently being built in Italy, is the first ship in the Princess Cruises fleet to be powered by liquified natural gas (LNG). This cleaner-burning fuel will significantly reduce air emissions and marine gasoil to minimise the cruise companies’ environmental footprint.
The 4,300-passenger ship is expected to be launched in early 2024. When she debuts, Sun Princess will sail an inaugural spring/summer season in the Mediterranean, followed by Western and Eastern Caribbean cruises out of Port Everglades in the fall of 2024.
During the unveiling event, Ottley and Gumbs had the opportunity to connect with Carnival Corporation & plc recently-appointed CEO Josh Weinstein. They also had fruitful discussions with other Carnival Corporation & plc and Princess Cruises executives.
“Carnival Corporation & plc, as a long-term partner of Port St. Maarten Group, are working on positioning cruise ships from the nine brands which will create new opportunities for St. Maarten for the upcoming cruise seasons,” Ottley said.
“The discussions with the executives were based around opportunities for additional calls for Princess Cruises, which is looking to have a stronger presence in the Caribbean, and it is our goal to make sure St. Maarten remains at the forefront of the cruise industry.”
Exciting times are ahead as we fine tune the details where, as a cruise port, we will pick up more port calls from the Carnival group, Ottley concluded. “The nine Carnival brands, eight of them currently visit the destination on an annual basis.”
Gumbs added: “Our deliberations also allowed us to connect with the President of Holland America Line Jan Swartz and President of Princess Cruises John Padgett.”
Gumbs said the discussion with Padgett had a strong note of the environmental goals outlined by the Cruise Line International Association (CLIA) 2030 carbon vision. He added that PSG has been strengthening its compliance department, which has been transitioning to include environment, social and governance (ESG) principles aligned with the recently-completed high level vision plan.
Sun Princess is the third ship to be honoured with the Sun Princess® name, adding to the legacy of the first ship sailing from 1974 to 1988 and the second ship sailing from 1995 to 2020. At that time, the ship had the largest number of balcony cabins and the cruise company’s first 24-hour cafe.
Sun Princess embarks on her inaugural cruise in 2024. The vessel will weigh in at 175,500 tons with an overall length of 1,133 feet. The next-generation ship will have 2,150 guest cabins and a guest capacity of 4,300.
“Weinstein, during our discussions, showed full confidence in the cruise industry where it concerns its full return and benefits for the industry and destinations,” Gumbs pointed out.
Carnival Corporation & plc is the world’s largest leisure travel company with 92 ships sailing under nine cruise brands, including Princess Cruises, famously known as the line of the Love Boat, and Cunard which built the world’s biggest ocean liner at the time, Queen Mary 2.
Carnival Corporation & plc’s 120,000 employees worldwide serve more than 13 million guests a year.
Carnival Cruise Line is the company’s biggest brand with 22 ships, operating 1,500 voyages annually, calling on ports from Cozumel to Ketchikan. The fleet’s largest ship, Panorama, can accommodate 4,008 guests.
The company’s portfolio of global cruise line brands includes Holland America Line, Seabourn, P&O Cruises (Australia), Costa Cruises, AIDA Cruises, and P&O Cruises (UK). Carnival Corporation also operates Holland America Princess Alaska Tours, the leading tour company in Alaska and the Canadian Yukon.

Planets on display: Looking up at the Nightsky

One boat-load of jokes

The Not So Red Caboose

Here and there and everywhere – it’s been raining! The Passionate Foodie

The Year of the Water Rabbit: Chinese New Year