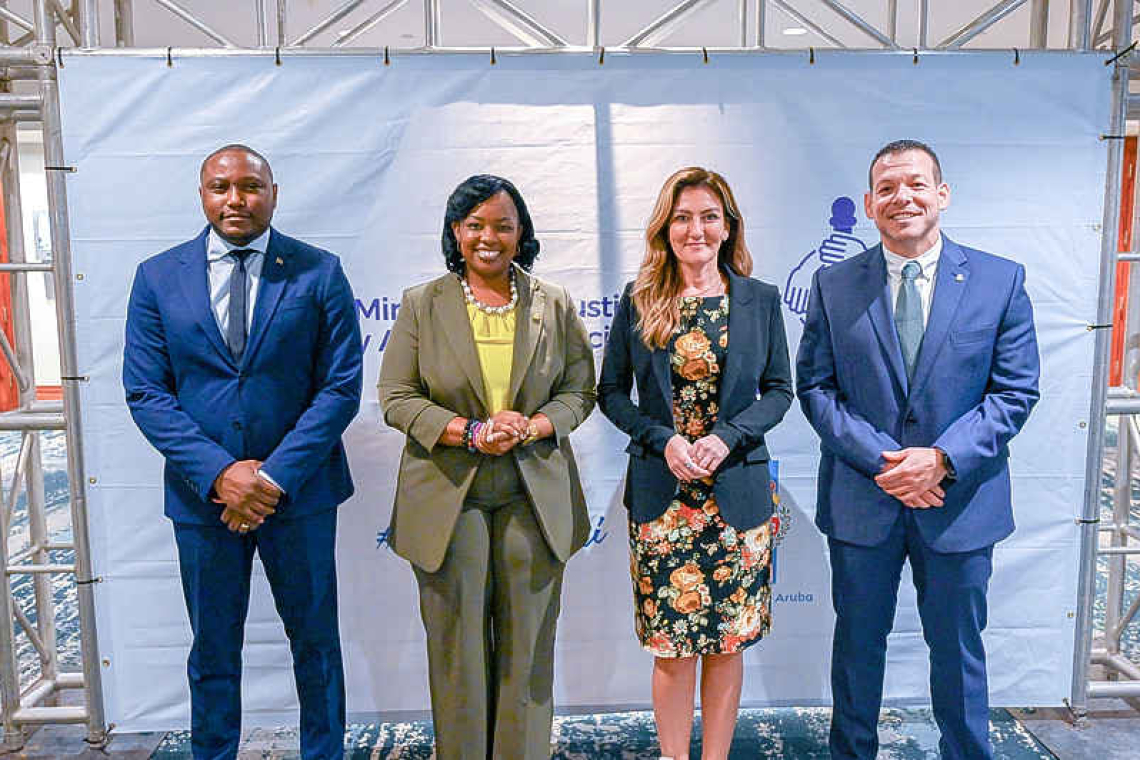 THE HAGUE/ORANJESTAD--Justice ministers of the Netherlands, Aruba, Curaçao and St. Maarten met in Aruba last Wednesday to discuss different topics to improve the law enforcement sector and migration in a broad sense. 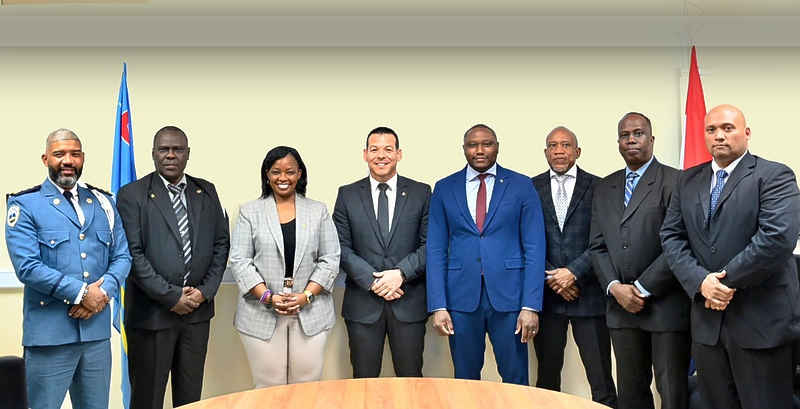 The Board of Police Chiefs with Justice Ministers (from left) Anna Richardson, Rocco Tjon and Shalten Hato.

Ministers Dilan Yeşilgöz-Zegerius of the Netherlands, Rocco Tjon of Aruba, Shalten Hato of Curaçao and Anna Richardson of St. Maarten physically came together for the first time since the COVID-19 pandemic. Aruba was the host country of the Judicial Four-Country Consultation JVO.

Collaboration is essential for well-functioning immigration services in the countries of the kingdom. The four countries work closely together to combat crime. Yeşilgöz-Zegerius, who is also responsible for justice in Bonaire, St. Eustatius and Saba, said in a press release that collaboration with the Dutch Caribbean countries was essential.

One of the decisions taken during the meeting was to prolong the pilot that enables residents of the Dutch Caribbean to travel with their ID card within the Caribbean part of the Kingdom.

The capacity issues the Dutch Caribbean countries face in certain judicial organisations were discussed. Investments by the Dutch government within the Kingdom to combat cross-border and subversive crime lead to strengthening at certain organisations.

However, at the same time, these investments by The Hague create an imbalance between the local organisations and the organisations that have been strengthened. This at times slows down the operations in the judicial sector. The ministers talked about the causes of this imbalance and agreed that talks would continue on this matter on a civil servants’ level.

The ministers also talked about the continuation of collaboration in the area of human trade and human trafficking. New Detective Cooperation Team RST team chief Ans Rietstra was introduced during the meeting.

Tjon, Hato and Richardson were invited by the Board of Police Chiefs (College van Korpschefs) of the Caribbean countries in the Kingdom on Thursday for an extensive presentation and discussion on the board’s activities.

The Board of Police Chiefs is a partnership of the police forces of Aruba, Curaçao, St. Maarten, and the BES islands represented by their respective chiefs of police and supported by the National Police of the Netherlands, in which the forces closely collaborate on and discuss matters of common interest. The board is chaired by each of its members in turn under a rotating chairmanship. The current chair is St. Maarten Chief of Police Carl John.

During the presentation and discussion, the ministers of justice were updated on the activities that have been carried out in recent months at the board’s request. These activities focused on information exchange between the countries, whereby special attention is placed on improving analysis capacity in the forces.

Crucial are also general education programmes for the police forces and how these can be further developed in the region while also looking at organising specialised training programmes to further professionalise the forces. This will be carried out in collaboration with the local training institutions in Curaçao and Aruba with the support of the Netherlands Police Academy.

All three ministers of justice very much welcomed the opportunity for this first meeting with the Board of Police Chiefs which they found to be quite enlightening. Richardson, supported by her colleague ministers, expressed the hope that this meeting would mark the beginning of a regular discussion forum between the ministers and chiefs of police to discuss common matters of importance.

Tjon said in a separate press release that organised crime had been a much-discussed topic. He explained that the combating of organised crime was divided into various parts; for example, the information and intelligence side. Large investments have been and continue to be made in this area, together with border security. He said that this topic remained a priority matter for the kingdom.

He spoke of a “very good meeting” between the four countries where the road was paved for increased collaboration with positive results for the judicial sector.