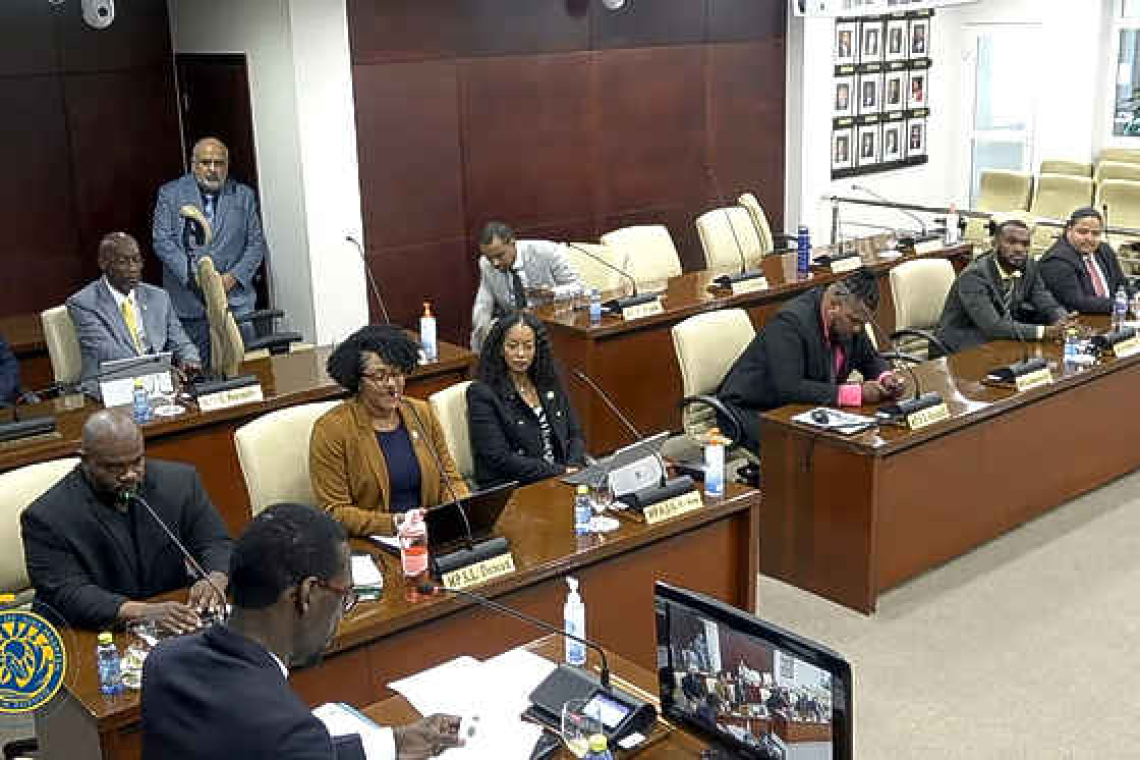 A scene during Friday’s meeting of Parliament.

PHILIPSBURG--A motion presented by Independent Member of Parliament (MP) Christophe Emmanuel calling on government, as shareholder in the Central Bank of Curaçao and St. Maarten (CBCS), to delay any sale of Mullet Bay until Parliament’s inquiry on Mullet Bay is complete, passed in Parliament on Friday with nine votes for and three against. The motion also called for St. Maarten to be granted the right of first refusal to purchase Mullet Bay.

A second motion on Mullet Bay presented by Party for Progress (PFP) was voted down by eight votes against and four votes for.

It also resolved that the government of St. Maarten make every possible effort to ensure that the interest of St. Maarten is paramount in any decision made related to the Mullet Bay property and that the Mullet Bay Commission in Parliament, with the support of the secretariat, expedites the completion of its assignment and presents the final report within four months.

Emmanuel’s motion stated that the people, economy and overall economic development of St. Maarten had suffered due to the destruction caused to the Mullet Bay property by the hurricanes in 1995.

It stated that CBCS had appointed two directors to restore order at Sun Resorts and to initiate the process of selling and/or developing Mullet Bay; that the geographic area of the Mullet Bay property has historic importance for St. Maarten and that responsible economic development is crucial for the economy and the ecology of the country; that the Parliament of St. Maarten has started a Parliamentary inquiry with the goal to investigate the property and to present possible solutions; and that the Parliament of St. Maarten has approved, by means of the inquiry, the analysis of various actions as stated in the Parliamentary inquiry proposal, including the expropriation and first right of refusal for the acquisition of the Mullet Bay property, for which the final report can serve as a premise for planned actions.

In motivating his vote on his motion, Emmanuel called on the Mullet Bay Commission in Parliament, with the support of the secretariat, to expedite the completion of its assignment and present the final report within four months. He plans to follow up with government on the motion.