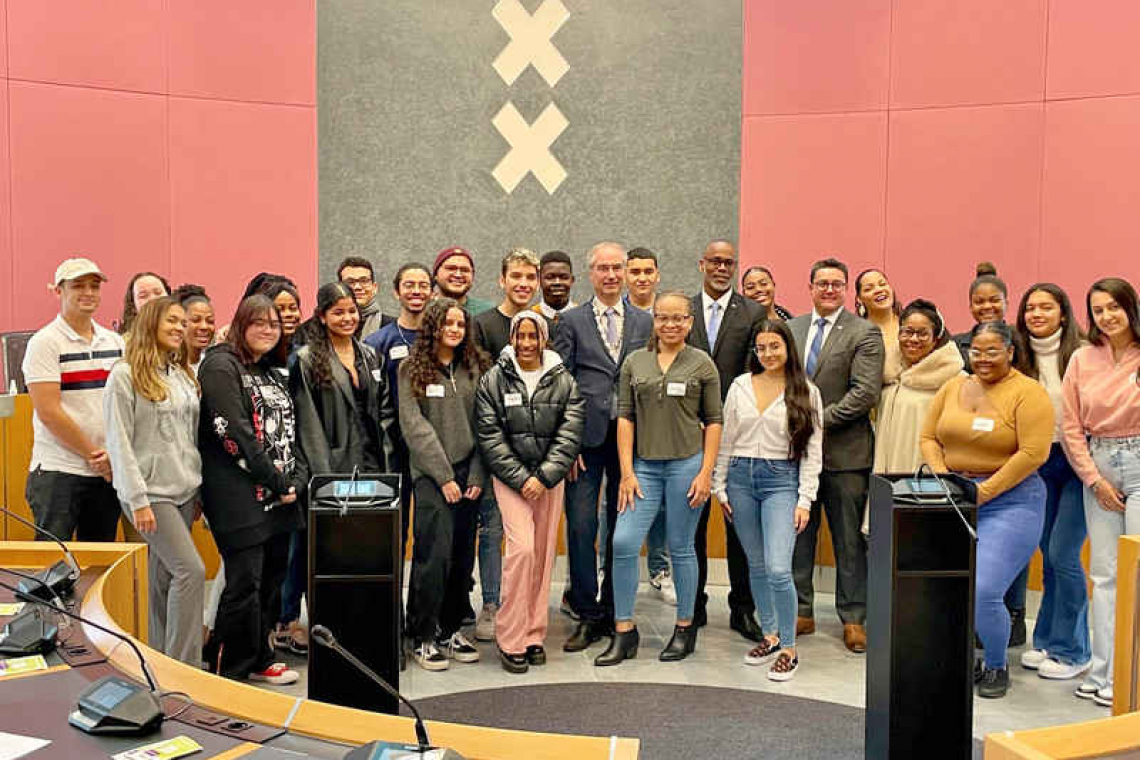 AMSTERDAM--The Municipality of Amsterdam on Thursday gave some thirty new students from the Dutch Caribbean a warm welcome to the city. This was the tenth time that the welcoming ceremony was held. Last year, it could not take place due to the pandemic.

Amsterdam’s Acting Mayor Egbert de Vries welcomed the students on behalf of the city. He lauded the students for taking such a “big step” by moving to new scenery, a new house, a different culture and language and a next phase in their school career.

De Vries, who spent part of his youth in Curaçao, said that Amsterdam has an extensive history, but also a great future with people from all parts of the world. “Make use of that diversity. Get to know new people. But also make use of all that Amsterdam has to offer.” He urged the students to seek help if things got rough. “We all need help sometimes. There is nothing wrong about that.”

The acting mayor noted that this year, during the annual Emancipation Day commemoration “Keti Koti” (Break the chains), Amsterdam’s government extended its formal apologies for the city’s slavery past. “We found it necessary to do so because some members in government at that time were involved in the slave trade. We need to talk about this past.”

This year’s inspirational speaker was third year student Neftaly Albertsz who said that two years ago, she sat in the same Municipal Council Hall as a new student who just came from Aruba. She too urged the students to seek help if they needed it. “We are a hard-headed people. We don’t want help. If we have questions, we’d rather look things up on the Internet. But I’m telling you to get help. Don’t be afraid, don’t be ashamed.”

The second advice that Albertsz had for the students was to make friends, not only from the Netherlands, but also from other countries. “Keep your island, your family and your culture close to you, but get out there, get to know people, their culture and their food.”

Ministers Plenipotentiary Rene Violenus of St. Maarten and Guillfred Besaril of Aruba looked back at their own student time and also gave the new students advice. “Never be afraid to fail, learn from your mistakes. And never give up,” said Violenus. “Don’t be afraid to communicate and to speak up,” said Besaril.

Representative of the Curaçao House Ann Groot-Philips emphasised that it was important to study from the heart. “Study what is dear to you because that is what motivates you. Don’t study for a salary,” she said.

Chairperson of the Municipal District Amsterdam Southeast Tanja Jadnanansing, whose mother hails from Aruba, stressed the importance of letting your voice be heard. “Your voice matters, your descent matters. Don’t let anyone belittle you because you have a different accent. You too have a Dutch passport and this is your country as well. Be proud of who you are and be who you want to be. Read and study a lot and let your voice be heard.”

In between the speakers, moderator Tanja Fraai of WeConnect interviewed the students, giving the students the opportunity to introduce themselves and say a few words about their study and their new life in Amsterdam.

The successful event was closed off with a quiz about Amsterdam, some words by representatives of educational institutions and organisations, a reception and an information market.