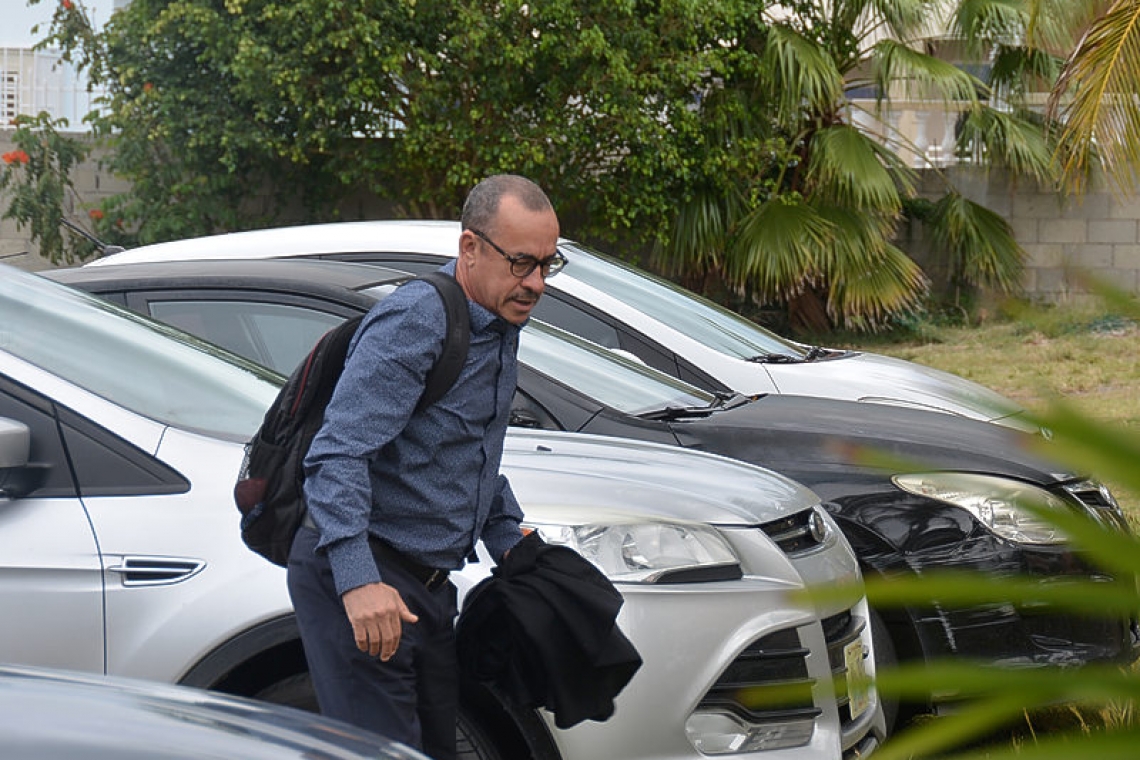 BELAIR--Lawyer for the defence Eldon “Peppie” Sulvaran pleaded Wednesday with the judge to declare the prosecutor’s case against former parliamentarian Theodore Heyliger in the “Larimar” investigation inadmissible.

Sulvaran claimed that the charges brought against his client, including bribery and money-laundering, could not be proven, and called on the court to reject the prosecutor’s demand for Heyliger’s immediate incarceration in case of conviction.

A large part of Sulvaran’s pleadings, which were presented to the court at the Belair Community Centre on Tuesday afternoon, focused on his efforts to convince the judge that he should throw out the case against Heyliger.

The lawyer’s main argument was that his client’s right to a fair trial had been violated because the prosecutor had used main suspect Dutch consultant R.M. as a crown witness in the investigation. Sulvaran said the Prosecutor’s Office had “only” closed a deal with M., for which he was rewarded with “millions of dollars,” to be able to accuse Heyliger of having committed crimes.

Also, former director of construction company Windward Roads (WWR) J.B. was persuaded to provide incriminating statements against Heyliger in exchange for a reduction of his prison sentence, Sulvaran claimed. The evidence obtained during “secret” and “sneaky” interrogations should also be excluded from the evidence, he said.

Heyliger’s rights to a fair trial were “deliberately” violated and with “gross disregard,” the lawyer claimed. He also was very critical of the Prosecutor’s Office’s “media policy” in this case, in which it had levelled “grave accusations” against Heyliger in a press release of late May 2019 in which it had depicted him as a man who had defrauded St. Maarten’s taxpayers of large sums of money for decades.

“Rewarding a criminal such as M. affects justice. This criminal not only avoids part of the sentence, he may also keep part of the proceeds and launder them. The higher the reward, the higher the possibility of false statements. The temptation shouldn’t be too great,” Sulvaran said in warning of the “danger” that M. had made up incriminating statements to get away with a milder punishment.

Sulvaran said the Prosecutor’s Office’s promises made to M., who had been at the heart of corruption, money-laundering and tax evasion since 1997, are “completely unacceptable.”

According to Heyliger’s lawyer, both M. and B. are lying about his client’s involvement in the scheme. He described M. as a “cunning” businessman and a “pathological liar” who was not “Santa Claus.”

“The deal with M., which consists of a three-year sentence, suspension of the pre-trial detention and return of 1.8 million euros in criminal assets, is shrouded in a cloud of mist” and should be disallowed by the court, the lawyer stated. Apparently, “crime pays in St. Maarten,” he added.

He objected to the fact that his client, who had done much good for St. Maarten, including the promotion of the island as a tourist and cruise destination and the promotion of employment for local St. Maarteners, was depicted as a “top criminal with a demonic profile.”

Heyliger’s lawyer also reminded the court of the inhumane conditions under which Heyliger had been held in pre-trial detention in a cell at the Philipsburg police station, after which he had been transferred to Bonaire without notification of his family and his lawyer and without his medication while he was suffering from gout.

Sulvaran was not as elaborate about the charges, which he said could not be proven for lack of evidence. “Nobody saw that M. gave money to Heyliger,” he said in claiming that his client had not been bribed or favoured. He stated it was common practice to put in a word for a company in the Executive Council.

According to the lawyer, his client was not in a position to make decisions about the awarding of contracts, as prior to October 10, 2010, government decisions were made by the Executive Council as a whole and not by an individual commissioner. Also, Heyliger was not the omnipotent decision-maker at the harbour, but the Harbour Group of Companies’ Board of Directors and Supervisory Board, Sulvaran said.

The unproven charges include the “Mullen” property deal, for which the real-estate broker attempts to blame Heyliger, said Sulvaran. Also, the alleged “credit line” provided by WWR to a number of companies owned by Heyliger’s former stepfather G.P. could not be proven because Heyliger had “never received a penny.” The payments in connection with work carried out by WWR on Heyliger’s home were being dismissed as a “wild-goose chase.”

Sulvaran arrived at the conclusion that this case was a built on the “deliberate violation of powers in order to inflict as much suffering as possible and eliminate the politician Heyliger.”

It is expected that the court will present its decisions in the Larimar investigation on April 24.