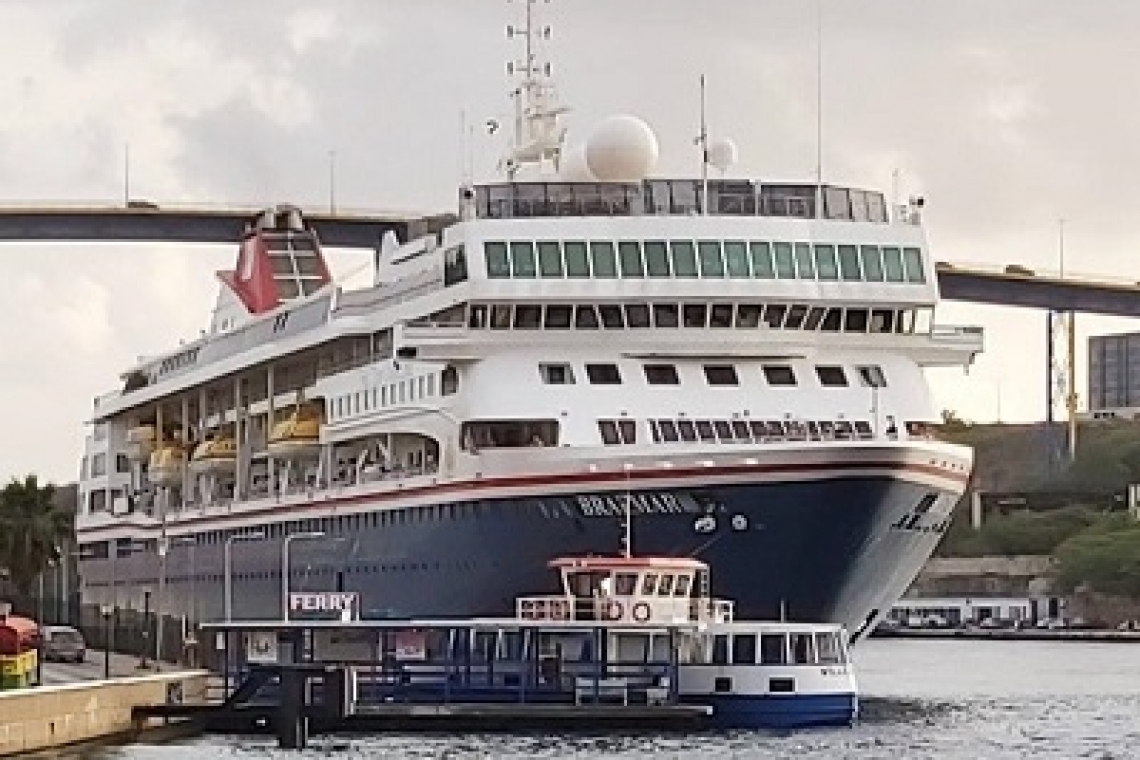 PHILIPSBURG--Government has turned down a request from cruise ship MS Braemar, which has a few confirmed coronavirus COVID-19 cases on-board, to allow the vessel to dock in St. Maarten for passengers who are not affected by the feared virus to disembark and be flown out.

A “small number of individuals” on-board MS Braemar were tested for COVID-19 coronavirus in Curaçao by the Public Health Department. According to their epidemiologists Dr. Izzy Gerstenbluth, some of those tests have returned with a positive result. The patients who were initially struck down with “influenza-like symptoms” will remain on board in isolation and will receive treatment from the ship’s medical team.

The tests were carried out after two guests were diagnosed with the virus after leaving the ship last week. Health officials in Canada’s Alberta province also announced that its seventh confirmed COVID-19 case is a woman in her 50s, who returned to Canada on March 4, from a Caribbean Cruise on the MS Braemar. Her symptoms started upon her return to Canada.

Jacobs, who is also Chairperson of St. Maarten’s Emergency Operations Center (EOC), said government received a request from the MS Braemar on Wednesday morning seeking permission to have passengers who did not have the virus disembark to fly out, but government denied that request.

On March 1, local officials had allowed the then stranded ship to turnaround in St. Maarten after its homeport in La Romana, the Dominican Republic, denied the vessel entry on Thursday, February 27, amid fears that four Filipinos, two Americans and two Britons on board were potential coronavirus cases. During the turn-a-round days later, a number of passengers disembarked and were flown out and a number who flew in, embarked the vessel.

During the Council of Ministers press briefing on Wednesday, Jacobs stressed that collaboration is continuing with the Collective Prevention Services (CPS), the Ministry of Tourism, Economic Affairs, Transport and Telecommunication (TEATT), Port St. Maarten and Princess Juliana International Airport (PJIA) to ensure that visitors are properly screened and that airlines, cruise vessels, the harbour and airport do due diligence.

Government is also looking at improving the time span in which testing for the coronavirus can occur. Based on the country’s connections with the Netherlands, testing is currently done via the Dutch National Institute for Public Health and the Environment RIVM in the Netherlands. However, there are also testing possibilities in Curaçao and government is looking at increasing its collaboration there as well as with its partners in French St. Martin.

St. Maarten Medical Center (SMMC) is also looking at increasing its capacity. “One of our biggest problems is lack of capacity,” she continued. Arrangements are being made with international agencies as well as having pavilions in St. Maarten to increase the capacity for SMMC. “There is a clear-cut plan in place and we are hoping to have it done in time before any outbreak takes place,” she added.

Members of the EOC met on Tuesday, March 10, and the main message officials want to send to the public is the importance of prevention and preparedness.

The daily protocols were stepped up in terms of sanitation at utilities company GEBE and contingency plans are in place to ensure that water and electricity are provided to community.

Schools have been notified about the virus and school bus transportation vendors were contacted to ensure that they increase their hygiene protocols.

The Department of Communications has been ensuring that the communication flow to the public is “optimal.”

As it relates to the maximum prices on latex and silicone gloves, hand sanitiser, N95 masks, disinfecting wipes and sprays and rubbing alcohol (70 per cent) (see related story), Jacobs said this is to ensure that persons do not take advantage of residents. She understands that there will be a shortage of certain products and a delay in getting them in the country, but she urged consumers to be mindful and not purchase everything for themselves and to think of others. She also urged consumers to report businesses engaging in price gouging.

She alluded to the travel restrictions recently put in place, noting that it would count not just for airlines, but also for cruise lines. While government has not cancelled any public gatherings, it will remain vigilant.

PJIA has introduced mobile wash stands to promote handwashing and further protect its staffers “because hand sanitisers will run out.” Jacobs said this is an idea other establishments can explore.

Cleaning has increased at the government building. The public areas are being cleaned every hour on the hour to ensure that it remains sanitised. She stressed, however, that individual behaviour also plays a role in keeping persons safe.

The prime minister urged households to make preparations for themselves and their families by having a disaster management kit with food, water and medication for 14 days in the event one would need to be isolated at home.

The EOC will continue to meet on a weekly basis.