Rameses Dingehout: ‘People say I have green blood in me’ 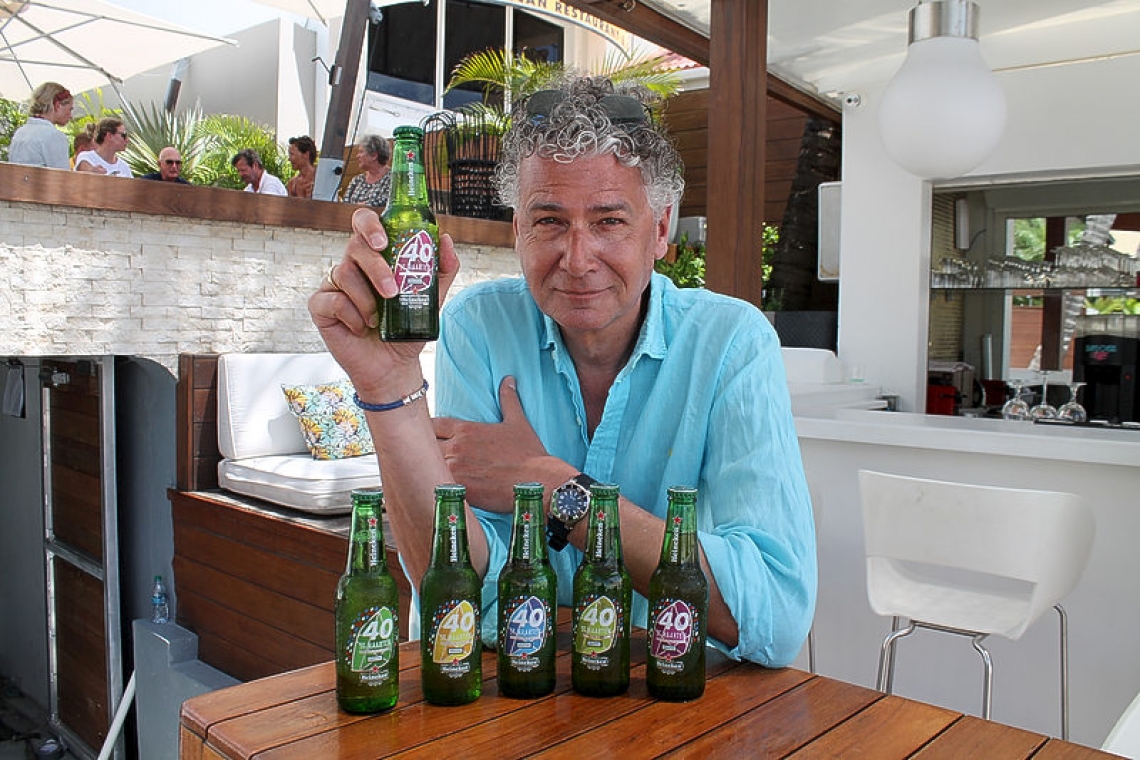 Rameses Dingehout with some of the Heineken bottles produced for the 40th St. Maarten Heineken Regatta. (Robert Luckock photo)

PHILIPSBURG--The tall, relaxed Dutchman emerging from the sun loungers at Holland House Beach Hotel to greet this reporter mingles unrecognised with other tourists soaking up the sun, drinking their piña coladas or a certain very popular beer.

He is Rameses Dingehout, the man responsible for creating the unique Heineken bottle label to celebrate the 40th St. Maarten Heineken Regatta. The average person is unaware of who he is but is happily drinking from the bottle that bears his label.

“It was great flying in here and seeing everybody drinking it,” smiles Rameses. “I have had some very positive feedback and exchanges. People enjoy it and that is what it is about: enjoyment, fun and connection with your consumer, putting a smile on their faces.”

Rameses is Senior Packaging and Identity Design Manager, a member of the commerce team for Heineken Global. This means he is in charge of everything tangible pertaining to the Heineken brand, from packaging to merchandising, logos, key visuals and so forth.

He studied graphic design at Rietveld Academy in Amsterdam and his first jobs, even before computers came into the mainstream, often included the Heineken brand. One of his jobs was with Unilever as a junior graphic designer. But his big break came in 1997 when the company he was working for in London, Design Bridge won the pitch to work on the Heineken brand, largely due to Rameses’ knowledge of Heineken.

He worked mostly on packaging, sometimes on logos. He continued successfully for several years on varied projects before Heineken asked him if he would like to join their design and commerce team to “pursue the green thread”.

“The great thing about working for a global brand is that the normal packaging of the bottle, the shape, the label, is the same wherever you are in the world,” he explains. “Because of legal restrictions in some countries, there can be an adjustment in the text on the back label, but the global look and feel is the same, always with the red star. And the content, the recipe, is the same all over the world.”

Heineken is present in 179 countries and is a prolific sponsor, supporting the Champions League, Euro 2020, Formula One and the latest Bond movie. The latter’s release, he says, has been postponed for six months due to cinema attendance dropping dramatically in Asia because of coronavirus fears.

Major sports events are also under threat. Limited edition bottles are produced to coincide with these major events to, as Rameses puts it, “get the consumer more involved with the brand in an enjoyable way, to create a positive reaction.”

For this project the standard label was turned into the shape of a sail, with 40 tiny little boats in the colours of the St. Maarten flag sailing around on the outside. The label was then produced in 40 different colours with the Heineken star in the background. Each bottle label is numbered on the side making it appealing for collectors.

“The coloured labels give the beer that party feel, and in this case, that was very important for our consumers,” says Rameses. “Twenty-five different labels were printed on a one-metre-wide sheet and 15 on another one before they were cut. Basically, you are dividing all the colours of the rainbow by 40. Some look nearly the same but they are all different colours.”

Due to the lead-in time required, Rameses began working on the design in August last year. The process of producing the label took about a month.

“The brief went to the ad agency VBAT to produce the design, under my direction. We discussed it and shared the design with John Leone and the marketing team here before the final decision was made.

“When everybody was happy; that is John and Yacht Club General Manager Michele Korteweg and the marketing team, I had to get approval internally from the Chief Marketing Officer (CMO) who gave the okay. The labels were printed in England and the bottles ordered in the Netherlands. Production time was six weeks; then you add on the shipping time by sea.”

Rameses is also behind the design of the new Heineken cans. He has no idea how many cases of the special 40th bottle were ordered but it is safe to say consumption before, during and after the regatta will have been considerable. John Leone later confirmed some 15,000 cases had been ordered.

Rameses decided with his wife to book a two-week holiday in St. Maarten at his own cost to coincide with the regatta. “We saw the regatta and were invited to the parties by John and the Heineken team, so it was a nice combination.”

Even if he wanted to get away from Heineken, that would not be possible. His home in Amsterdam has a view of the Heineken building, a 10-minute tram ride away. “I have been with Heineken so long that people say I have green blood in me,” he laughs.

Heineken is a strong advocate of drinking responsibly, and Rameses was pleased to see the message was visible at the regatta parties.

“It is why we have Heineken non-alcoholic zero-zero. It sells extremely well; it is refreshing and has the same taste. It is a good idea to pace yourself with a zero-zero first. But above all, do not drink and drive,” he advises, before saying goodbye and returning to his sun lounger.