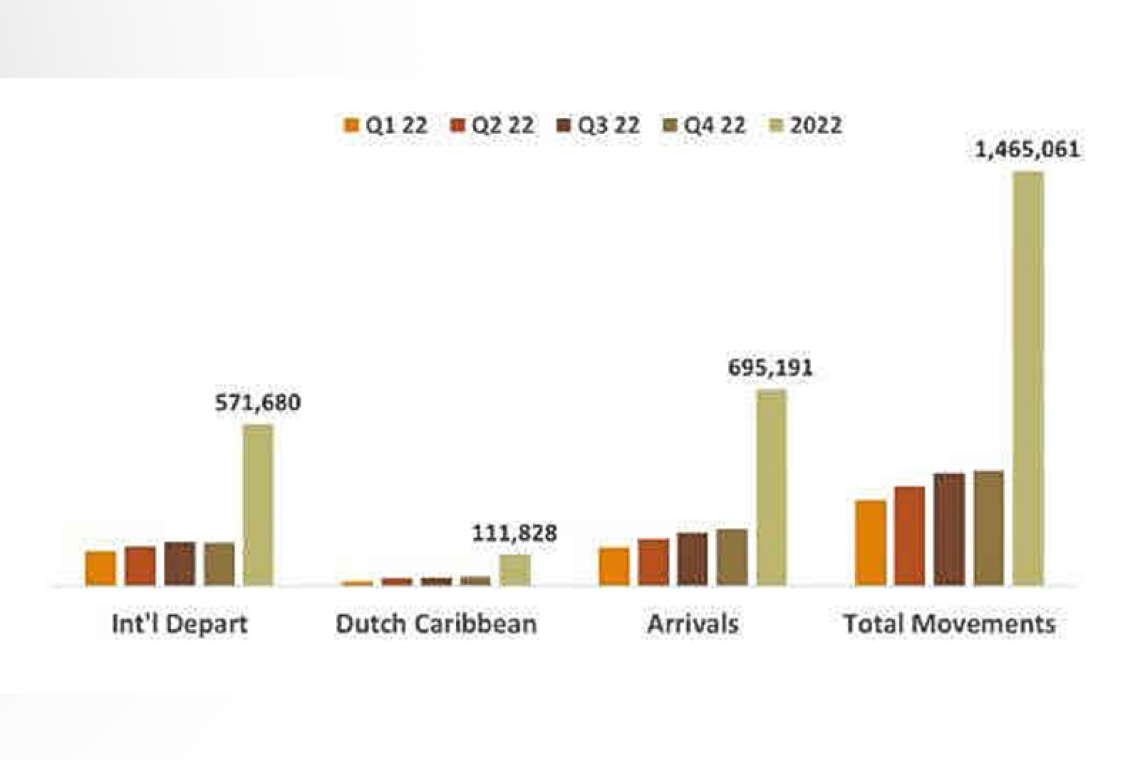 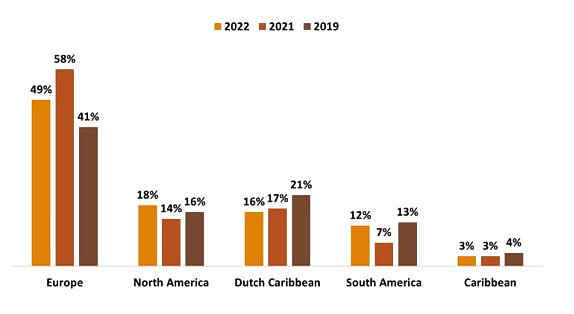 WILLEMSTAD--Curaçao Airport Partners (CAP) is reporting a full-year recovery of passenger traffic movements of 101% compared to 2019, the benchmark for pre-pandemic figures. Total passenger movements were 1,465,061 in 2022.

Since fully reopening for commercial traffic in July 2022, CAP has measured growth by comparing quarterly results. During the fourth quarter of last year there were 152,961 international departures, down 2% compared to the prior three months, of which 33,602 passengers within the Dutch Caribbean, an 8% increase.

Arrivals during the fourth quarter totalled 201,962 for a 7% increase compared to the quarter before and total passenger movements were 408,819: a 3% increase.

The reopening of Canadian borders for commercial traffic in the latter part of 2022 prompted Air Canada and WestJet to restart their winter season flight schedules from Toronto and Montreal non-stop to the destination.

On the other hand, capacity challenges and schedule adjustments from Amsterdam impacted KLM’s service.

US visitor arrivals continued to grow, stimulated in part by the opening of Royal Sandals Resort in June.

When it comes to South America, the Colombian and the Brazilian markets showed significant recovery last year.

Passenger Traffic Diversification is one of CAP’s development principles. “During the pandemic and understandably so, our passenger traffic distribution was primary dominated by the Netherlands. With the gradual opening of other markets and restart of air service, the distribution of passenger traffic from different markets, mitigates dependency. A balanced market share distribution, which would consist of smaller share percentages and more passenger numbers avoids the risks of dependency on one major market,” stated a release.

According to Cirium data, there were a total of 20,478 scheduled flights arriving and departing from Curaçao, with a combined 1,882,048 seats. Recovery of service frequency and capacity compared to 2019 were 92% and 99% respectively.

“CAP remains cautiously optimistic due to several uncertainties that could have impacted travel more aggressively. The lingering pandemic, the war in Ukraine, inflation, recessions, weakening value of the euro, US airline pilot and crew shortages and airport staffing challenges that underlined the volatility of the economy and travel.

“The containment of the Omicron virus impact on island made the impact minimal due to the efforts of the destination. Opening of borders and the restart of flight schedules by various airline partners and an increase in demand, contributed to the exceptional year-end traffic results. The addition of 30% capacity to existing hotel room inventory further stimulated demand during the second semester of 2022,” added the release.

International Air Transport Association (IATA) in its initial economic 2023 outlook indicated that “most of the headwinds from 2022 are likely to remain with us in 2023, though on the whole they may be unlikely to intensify.” In addition, the aviation organisation cautioned that “passenger price sensitivity has been low so far since travel has again been possible, though this can be expected to rise as economies slow and unemployment rates climb again.”

What could result in an upside in economic activity and air transport, IATA believes, would be an end to the war in Ukraine and the lifting of all travel restrictions.

Airports Council International (ACI) in its latest quarterly assessment analysing the impact of the COVID-19 pandemic, its effects on airports, and the path to recovery, indicated that “uncertainty still surrounds the recovery of the aviation industry, especially in the medium term. Projecting the path to recovery at this point is still an exercise requiring prudence. The potential for an economic downturn and possible recession continues to increase in probability. Those risks could dampen or delay the recovery.”

According to ACI, despite several headwinds, the baseline projections indicate that the industry will recover to 2019 levels by the end of 2023 or in early 2024. International travel is forecast to recover by 2024.

ACI predicts that North-, South America and the Caribbean will be the first regions to reach full recovery compared to 2019 by the end of 2023. Global passenger traffic is expected to reach 2019 levels in late 2023 with the full-year recovery to 2019 levels in 2024.

“Despite all the challenges, CAP is pleased that Curaçao has reached traffic recovery ahead of what both IATA and ACI are forecasting. CAP is realistically optimistic in 2023, as the challenges in 2022 continue to be of concern and underscore the volatility of the economy and aviation industry.

“However, the addition of room inventory announced for 2023 including among others, the opening of a brand-new Marriott Courtyard and the second tower of Mangrove Beach Corendon all-inclusive property, Curio by Hilton are indications of further growth in 2023.

CAP, in close partnership with Curaçao Tourism Board (CTB) and Curaçao Hospitality and Tourism Association CHATA, “continues to ensure the retention, growth, and diversification of Curaçao’s route network.”