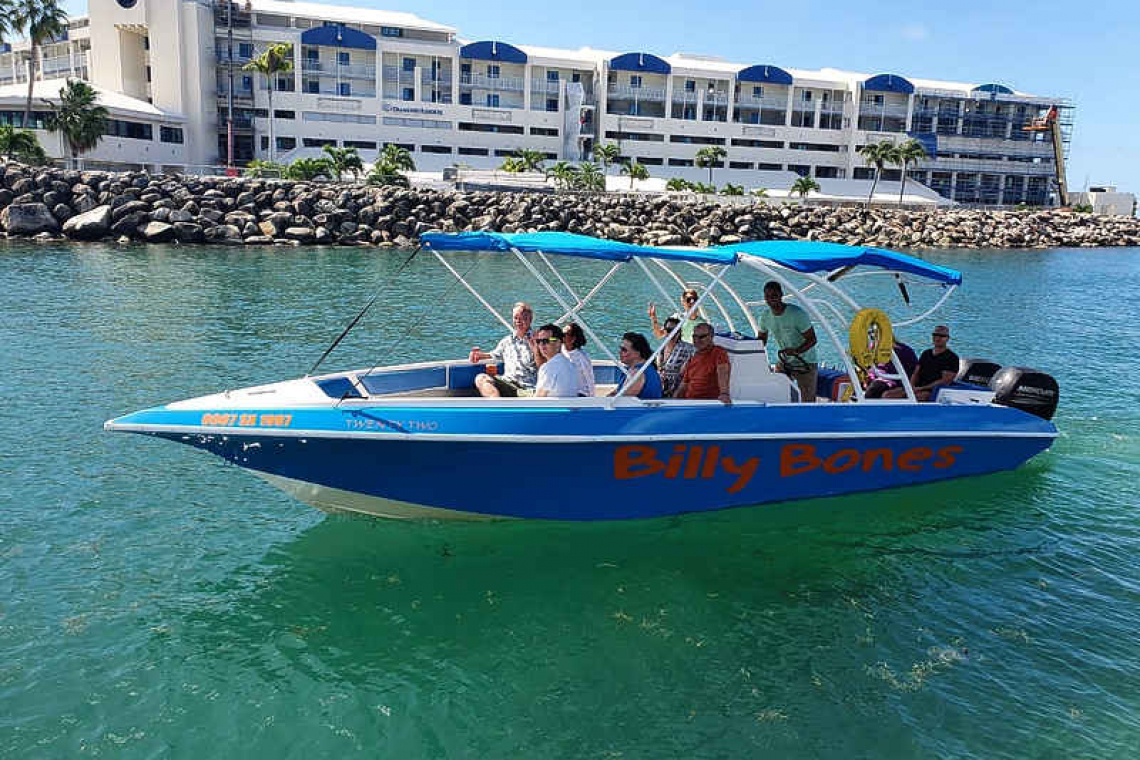 MARIGOT--The main Dutch-side charter boat operators who normally take their clients to the French side for excursions as part of their tour promotions have expressed concerns and anger over the heavy toll French St. Martin’s current maritime restrictions have put on their businesses.

Despite the re-opened border and free movement since October 1, Dutch-side-registered vessels are prohibited from French-side waters, yet anyone can drive across the border to the French side and enjoy facilities, bars and restaurants.

This is one of the main complaints cited by charter boat owners who accuse the French authorities of double standards and passing the buck between decision-makers in the Préfecture and Maritime Affairs.

Stiffer COVID-19 measures have been implemented on the French side recently. The Préfecture openly admits it has always put health of the population before the economy. French-side businesses suffered catastrophic consequences when the border was closed, as proven by a recent survey, while the popular opinion was that closing the border had little effect on preventing spread of the virus.

“If we [boats – Ed.] can’t go over there, then their boats should not be allowed to come to the Dutch side,” reasoned Ian Martin, who runs charter catamaran excursions. “Some of their boats even reside on the Dutch side. They take their clients to the French side and do what they want. I’ve seen them come from St. Barths, they don’t clear in, they go to the store and buy what they need and go back to St. Barths. I don’t have any problem with that as long as we can do the same.”

Martin said he had attempted a day sail to Tintamarre but had been stopped and fined by the French Coast Guard. “But it was handled very politely by the Coast Guard and the fine was not heavy.”

Still, he is resigned now to waiting for the French authorities to lift the restrictions. In the meantime, all that is left is the rather unappealing option of day sails to Mullet Bay. He is very concerned about the upcoming high season unless the restrictions are lifted.

“People are not going to book with us if all we can offer is Mullet Bay,” he added. “If the COVID situation is worse on the French side, then we should be blocking them off. If they are taking our business, why are we letting them come over here?”

Balazs Szabo of Billy Bones Boat Charters explained that at the time of the lifting of restrictions at the end of the first island lockdown his COVID protocols were approved by French Maritime Affairs, but were then refused after the border was reopened on October 1.

Billy Bones, in business since 2014, operates four speedboats taking a small number of clients and a maximum of 12 to comply with French-side regulations. The excursions visit five different spots on the island, mostly on the French side.

“We assumed we had everything in place to start again on the French side based on approval of our protocols, but we were stopped and turned back by Gendarmes,” he disclosed.

Szabo subsequently sought help from the Dutch-side Minister of Tourism and emails went back and forth to French Maritime Affairs, but to date he has not received any positive response from the French authorities despite promises.

“The whole boating community is affected by this, not only my business. How can it be fair if you can drive to French-side beaches and have lunch in large gatherings? I have pictures of the Pinel Island boat with 25 to 30 people on it and no masks. It seems as if we, the Dutch-side marine community has been cast aside, forgotten.

“Why am I being discriminated against? … How can I try to run a business, to put food on the table, to send my children to school, to pay my employees with already little income, if my hands are tied by not being allowed to go the French side?” he protested. “My employees depend on tips.”

According to Szabo, Réserve Naturelle used to charge two euros per head to go into the Réserve, but this has just been raised to five euros per head for Dutch-side charter boats, although French-side boats only have to pay two euros. An attempt to verify this with the Réserve was unsuccessful on Wednesday.

Like Ian Martin, Szabo is left with the options of taking clients only to Mullet Bay or Divi Little Bay.

“If I have five enquiries from groups and I tell them I cannot go to the French side, four will drop out and say they are not interested because they can drive to Mullet Bay. Take Anguilla – the island is closed, nobody in, nobody out. It’s clear and I respect that. It’s not France doing this, it’s St. Martin and somebody is protecting somebody.”

Contacted on Wednesday, St. Martin Head of Maritime Affairs Michaël Wery said he had no further comments to make on the complaints.