Peru names centrist lawmaker as third president in past week 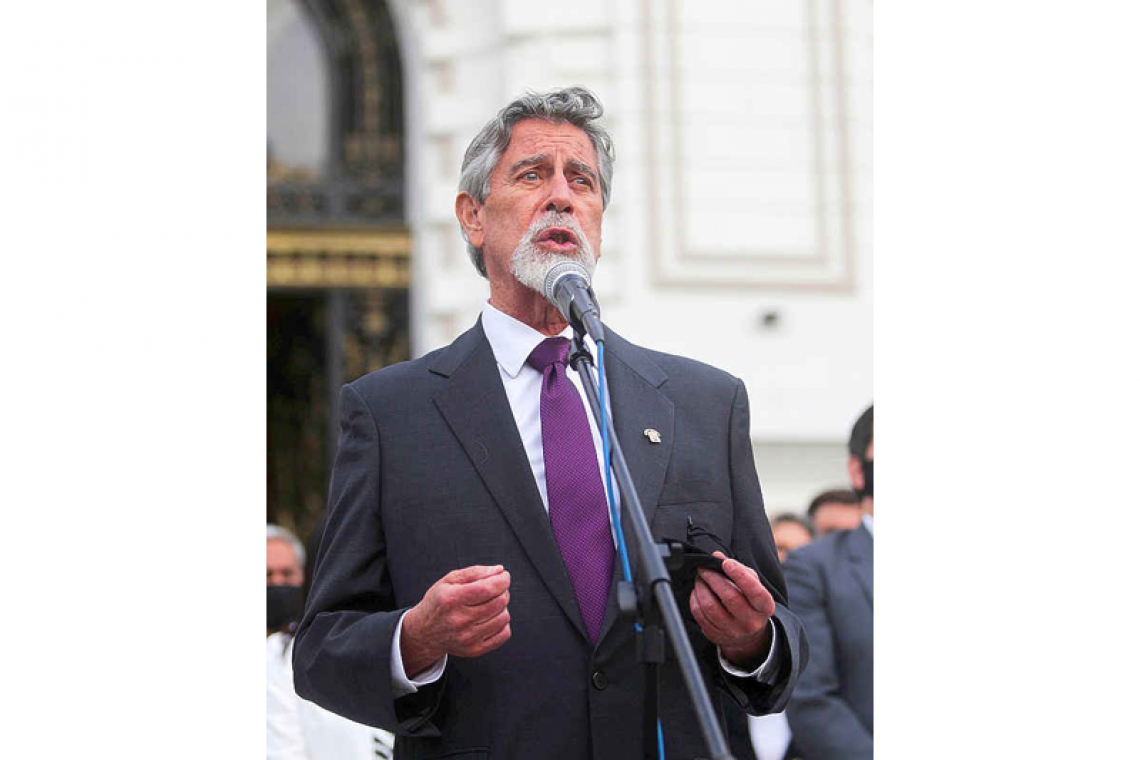 LIMA--Peru's Congress on Monday chose legislator Francisco Sagasti as the Andean country's caretaker president, in an attempt to defuse a sharp political crisis after angry protests and the departure of two presidents in the past week.

Sagasti, 76, from the centrist Morado Party, won enough votes to head Congress, which means he will constitutionally assume the presidency of Peru ahead of national elections called for April. The move makes Sagasti Peru's third president in a week, after interim leader Manuel Merino resigned on Sunday, five days after being sworn in following the ousting of centrist Martin Vizcarra.
The removal of Vizcarra, who was popular with many Peruvians but angered lawmakers with his push for anti-corruption measures and attempts to curb parliamentary immunity, sparked days of protests that led to the deaths of two men.
"Today is not a day of celebration," Sagasti said, striking a somber tone in his first words after taking office in Congress. "We cannot go back, bring them back to life, but we can take action from Congress, from the Executive, so that this does not happen again."
Sagasti, a former World Bank official and engineer, faces a formidable challenge to bring stability to the world's no. 2 copper producer, which was already hard hit by COVID-19 and heading for its worst economic contraction in a century. Shortly after the vote, Sagasti stepped outside the Congress building, raising his hand to the cheers of onlookers. Crowds in Lima's central plaza also greeted his election with jubilee.
Though the vote appeared to defuse tensions, underlying anger at police and elected lawmakers continues to simmer. Television images showed the families of the two young men killed in the rallies last week gathering for their burial.
"I ask for justice for my children," said Moraiba Sandoval, grandmother of one of those who died. She asked the investigation into their deaths continue and that the culprits be brought to justice.
Several human rights organizations in Peru have filed a complaint against Merino and a number of his former ministers for "qualified homicide, serious injuries and abuse of authority," according to a joint statement.
Sagasti, who received 97 votes in favor with 26 against, is set to complete the current government's mandate that ends in July 2021 and will include the holding of general elections on April 11. Peru's Congress overnight had knocked back another candidate, Rocío Silva-Santisteban, a leftist human rights defender, raising concerns over a power vacuum.
"The main thing for Peru is to regain stability and for this nightmare to end," legislator Alberto de Belaunde, from the same Morado Party, told reporters ahead of the Monday vote.
The recent crisis started when Vizcarra, an independent who has long clashed with Congress over his anti-corruption stance, was impeached and removed from office by lawmakers last week over allegations of graft, which he denies. It was the second impeachment Vizcarra had faced, after surviving the first attempt in September.
Merino, who as president of the Congress led the impeachments, succeeded Vizcarra. But he resigned after the protests escalated and as lawmakers threatened to impeach him unless he stood down.