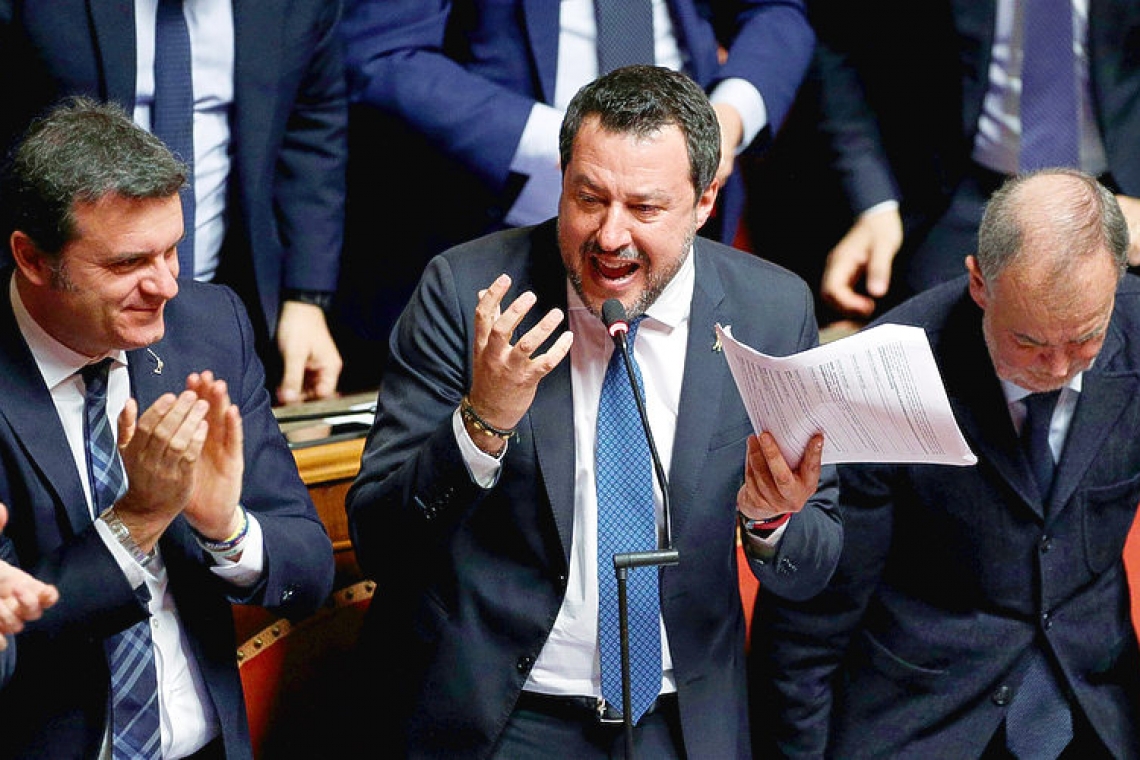 ROME--Italian senators voted on Wednesday to lift immunity for far-right leader Matteo Salvini, opening the way for a potentially career-ending trial over accusations that he illegally detained migrants at sea last year.

The decision gives magistrates in Sicily the go-ahead to press charges over his decision to keep more than 100 migrants blocked aboard a coastguard ship for six days last July as he waited for other European Union states to agree to take them in.
Salvini, who was serving as interior minister at the time, could eventually face up to 15 years in jail if found guilty at the end of Italy's tortuous legal process. Conviction could also bar him from political office, dashing his ambitions to lead a future government.
The upper house Senate voted 152-76 in favour of removing the legal protection that had shielded him as a former cabinet minister. The ruling coalition of the anti-establishment 5-Star Movement, the centre-left Democratic Party and other small centrist and leftist groups supported lifting his immunity.
Salvini's opposition allies voted against, while his own League party boycotted the vote. Aware that the vote looked certain to go against him, Salvini sought to make political capital out of the case, saying he had only been defending national interests.
"I have chosen against my own interests ... to go to court and rely on the impartiality of the judiciary," he said.
The byzantine nature of Italy's legal system means Salvini faces no immediate risk, but the case could prove a distraction as other investigations start to pile up at his door. Earlier this month another tribunal in Sicily recommended that Salvini stand trial over a separate migrant stand-off dating from last August, with parliament expected to decide on this case later in the year.
During his 14 months at the interior ministry, Salvini made tackling migrant boats a priority, barring ports to rescue ships and threatening the charities operating them with fines. In July, two weeks before he abandoned a coalition with the 5-Star Movement, he refused to let migrants disembark from the Gregoretti coastguard vessel, ignoring pleas from human rights groups to let the group come ashore.
Magistrates in Sicily believe it was an abuse of power that amounted to de facto kidnapping. But under Italian law, former ministers cannot be tried for actions undertaken while in office unless parliament authorises the investigation.
"The Senate was asked a precise question. Did minister Salvini act in the national interest? Yes or No? For us it is 'No'. This was election campaigning using 100 people aboard an Italian ship," said leftist politician Anna Ascani.
The Gregoretti investigation echoes another case from earlier last year when magistrates sought to try Salvini over his decision to keep 150 migrants aboard a coastguard ship for five days in August 2018. On that occasion, parliament blocked the request, with 5-Star rallying to his support, arguing that the decision to keep the migrants at sea was a collective one. This time, his one-time allies say he acted unilaterally without prior assent.
The Senate decision came at an awkward time for Salvini, whose deft political touch appears to have deserted him. The League remains easily Italy's largest party with more than 30% support, the latest polls say, but a defeat in a key regional election last month frustrated Salvini's latest effort to bring down the Rome government and return to power.
His party is also facing two separate financial inquiries for possible money laundering and for international corruption over suspicions that it tried to obtain millions of euros via a secret Russian oil deal - accusations it denies.