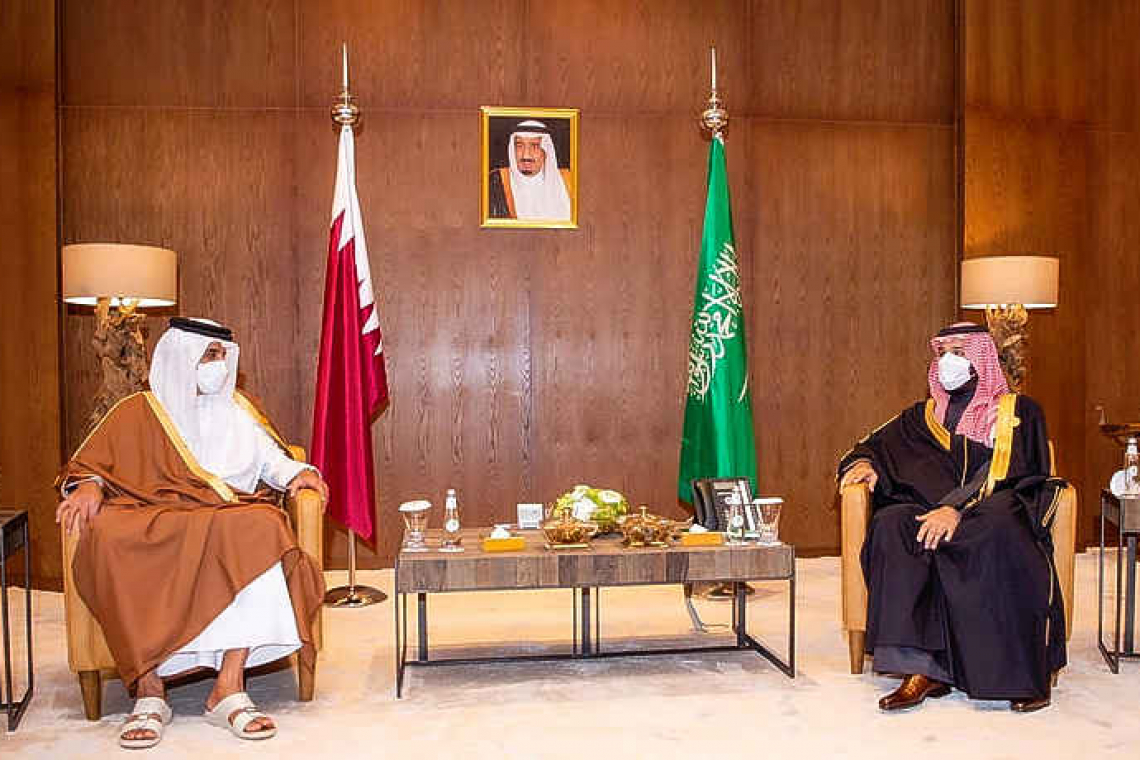 AL-ULA, Saudi Arabia--Embracing Qatar's ruler, Saudi Arabia's Crown Prince pushed a deal to end a row with Doha at a Gulf summit on Tuesday to try to strengthen an Arab alliance against Iran, although a final declaration contained only a general pledge of solidarity.

The kingdom's foreign minister said Riyadh and its Arab allies agreed to restore ties with Doha to end a boycott imposed in mid-2017, in a deal backed by Washington but which a United Arab Emirates official suggested would take time.
While the communique contained no detailed confirmation of a deal, the apparent breakthrough signalled hope for mending a rift between major U.S. allies two weeks before President-elect Joe Biden takes office and at a time of tensions with Iran. "There is political will and good faith" to guarantee implementation of the deal, Foreign Minister Faisal bin Farhan al-Saud told a news conference, saying the United Arab Emirates, Bahrain and Egypt had agreed to restore ties with Doha.
His Qatari counterpart, Sheikh Mohammed bin Abdulrahman Al-Thani, tweeted that leaders "closed the page on disagreement."
But UAE Minister of State for Foreign Affairs Anwar Gargash voiced a more cautious view in remarks to Al Arabiya TV, saying "we need to be realistic about the need to restore confidence and cohesion." He later told Sky News Arabia there was a timeline for ending the conflict, but gave no details.
U.S. Secretary of State Mike Pompeo said the United States welcomed what he called a "breakthrough to restore Gulf and Arab unity."
He added: "We hope the Gulf countries will continue to reconcile their differences. Restoring full diplomatic relations is imperative for all parties in the region to unite against common threats."
The emerging deal followed mediation efforts by the United States and Kuwait, and a U.S. official has said Qatar would suspend legal cases related to the boycott. Ahead of the gathering in the historic city of al-Ula, also attended by White House senior adviser Jared Kushner, Kuwait said Saudi Arabia would reopen its air space and borders to Qatar. The other three nations have yet to announce similar moves.
In a gesture of reconciliation, Saudi Crown Prince Mohammed bin Salman and Qatar's emir, Sheikh Tamim bin Hamad al-Thani, hugged on the tarmac before heading to the summit venue in a mirrored building reflecting the desert landscape. Sheikh Tamim later tweeted that the summit, which included Egypt, was a "defining moment" for the Gulf bloc.
Saudi de facto ruler Prince Mohammed, who chaired the short event instead of his father King Salman, said the al-Ula agreement "confirms Gulf, Arab and Islamic unity and stability."
He called for serious global action to address a threat he said was posed by Iran's nuclear and ballistic missile programmes and its "subversive and destructive plans."
Saudi Arabia, the UAE, Bahrain and Egypt severed diplomatic, trade and travel ties with Qatar over allegations Doha supports terrorism and is cosying up to foe Iran. Qatar denies the charges and says the embargo aims to curtail its sovereignty.
Iran Foreign Minister Mohammad Javad Zarif in a Twitter post congratulated Qatar for "the success of its brave resistance to pressure & extortion."
President Donald Trump's administration has been pushing for a resolution and reopening air space. Kushner was making phone calls on the emerging deal until the early hours of Monday, the U.S. official had said.
Diplomats and analysts said Riyadh was also pushing reluctant allies to show Biden it is open to dialogue. Biden has said he will take a harder line with the kingdom over issues including its human rights record and the Yemen war.
"This (deal) is seemingly influenced by a desire to pre-empt pressure from an incoming Biden administration, more than a genuine commitment to conflict resolution," said Emadeddin Badi, nonresident senior fellow at Atlantic Council.
All the states are U.S. allies. Qatar hosts the region's largest U.S. military base, Bahrain is home to the U.S. Navy’s Fifth Fleet, and Saudi Arabia and the UAE host U.S. troops.
The other countries had set Doha 13 demands, including closing Al Jazeera TV, shuttering a Turkish base, cutting links to the Muslim Brotherhood and downgrading ties with Iran.