British judge rejects extraditing Assange to US over 'suicide risk' 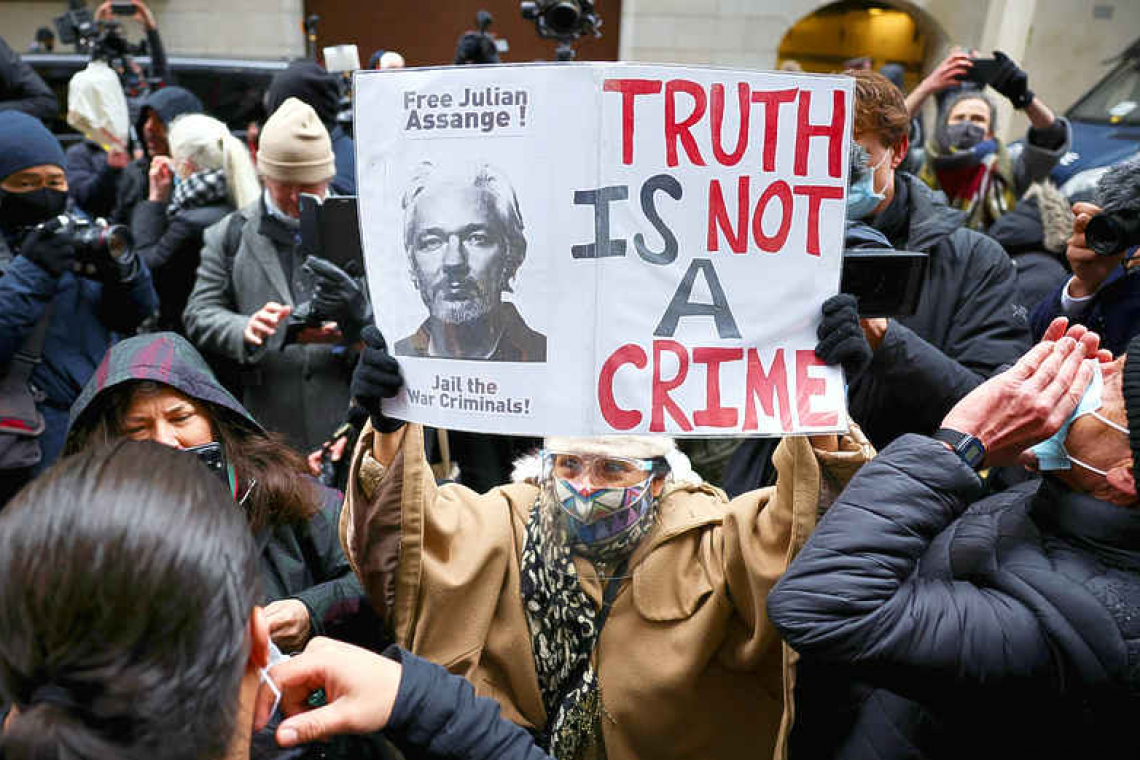 LONDON--A British judge ruled on Monday that WikiLeaks founder Julian Assange should not be extradited to the United States to face criminal charges including breaking a spying law, saying his mental health problems meant he would be at risk of suicide.

The United States said it would continue to seek the extradition of Australian-born Assange and U.S. prosecutors are set to appeal Monday's decision to London's High Court. The U.S. authorities accuse Assange of 18 offences relating to the release by WikiLeaks of vast troves of confidential U.S. military records and diplomatic cables which they say put lives in danger.
Assange's lawyers will seek bail on Wednesday for their 49-year-old client, who has spent most of the last decade either in prison or self-imposed confinement. "We will continue to seek Mr. Assange's extradition," said a U.S. Justice Department statement, adding that the United States had won on all the legal points, including arguments relating to freedom of speech and political motivation.
A spokeswoman for the transition team of President-elect Joe Biden, who takes office on Jan. 20, had no comment. The Obama administration, in which Biden served as vice president, decided not to prosecute Assange over concerns about the precedent the case could set for free speech and journalists. Outgoing U.S. President Donald Trump and his administration have sent mixed messages on Assange and there was no immediate White House comment on the ruling.
Shortly before the 2016 presidential election, Trump praised WikiLeaks after it released hacked emails which caused embarrassment for his opponent Hillary Clinton, saying, “I love WikiLeaks.”
But within months of Trump becoming president, his first CIA director Mike Pompeo, now secretary of state, denounced WikiLeaks as "a non-state hostile intelligence service."
Assange's legal team argued that the U.S. effort to extradite him was launched under pressure from Trump's administration, and that his extradition would pose a severe threat to press freedom. But it was only the risk he would commit suicide if he were held in a U.S. maximum security jail that led Judge Vanessa Baraitser to reject the extradition request.
Assange, she said, suffered at times from severe depression and had been diagnosed with autism. Half a razor blade was found in his London prison cell in May 2019, and he had told medical staff of suicidal thoughts and made plans to end his life.
"I find that Mr. Assange's risk of committing suicide, if an extradition order were to be made, to be substantial," Baraitser said in her ruling at London's Old Bailey court. "The overall impression is of a depressed and sometimes despairing man, who is genuinely fearful about his future."
She said Assange had made regular calls from jail to the Samaritans suicide-prevention charity.
Wearing a navy suit and a mask, Assange showed little emotion at the ruling. Outside court, his partner Stella Moris, with whom he had two children while seeking asylum in London's Ecuadorean Embassy, said the decision was a victory but the threat of extradition was still hanging over him.
"I call on the president of the United States to end this now: Mr President, tear down these prison walls, let our little boys have their father. Free Julian, free the press, free us all," she said.