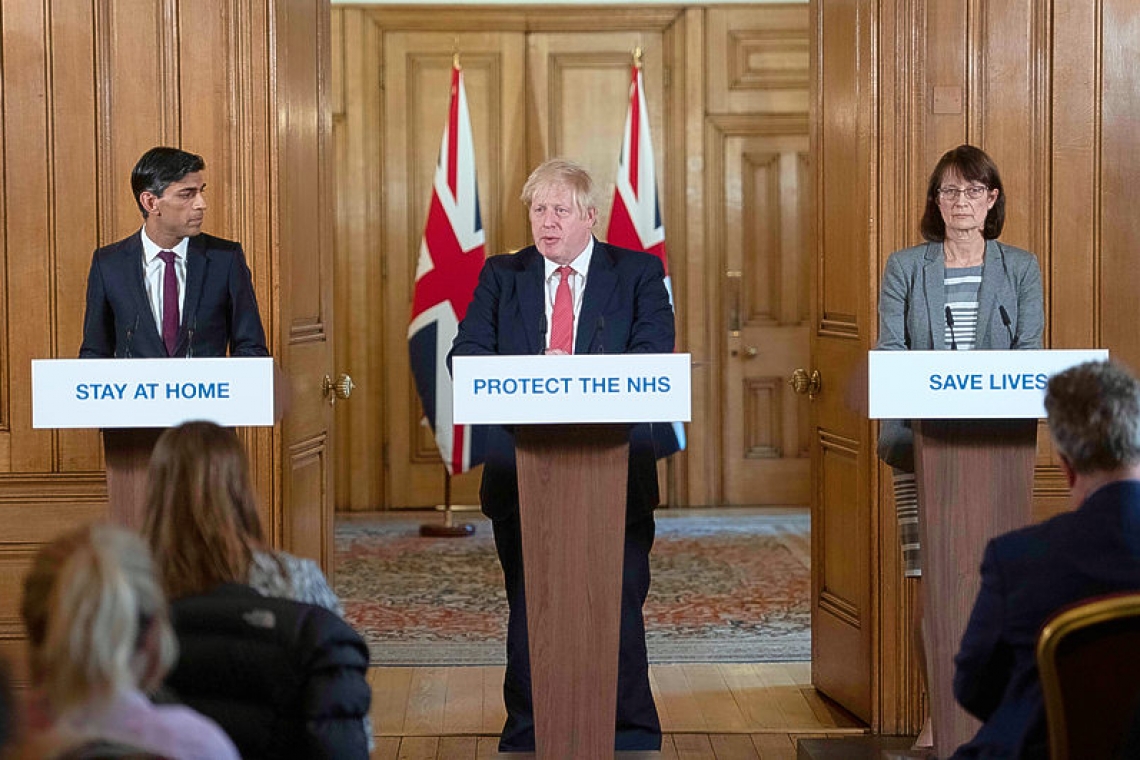 LONDON--Britain's government will pay a massive share of private sector wage bills to discourage bosses from firing staff as it resorts to war-time levels of borrowing to prop up the economy during its coronavirus shutdown.

"Today I can announce that for the first time in our history the government is going to step in and help to pay people's wages," finance minister Rishi Sunak said on Friday.
There was no limit on the size of the plan which the government will fund by selling more debt, as it will for other measures worth tens of billions of pounds rushed out over the past 10 days.
Sunak also allowed businesses to hold on to 30 billion pounds ($35 billion) of value-added tax (VAT), which they would normally pass on to tax authorities. "Combined with our previous announcements on public services and business support, our planned economic response will be one of the most comprehensive in the world," Sunak told reporters.
Moments earlier, Prime Minister Boris Johnson ordered the closure of pubs, restaurants, gyms and other businesses from Friday to slow the spread of the virus. Sterling lost about a cent against the U.S. dollar and the euro as Johnson announced the shutdown and Sunak set out measures to mitigate its impact.
The centrepiece of Britain's coronavirus crisis plan is a new grant covering 80% of workers' salaries - up to a maximum of 2,500 pounds ($2,930) a month each - if firms kept them on. "The truth is we are already seeing job losses and there may be more to come," Sunak said. "I cannot promise you that no one will face hardship in the weeks ahead."
The package of measures rushed out by the government this month could push Britain's budget deficit back to 10% of gross domestic product, its peak after the global financial crisis, JP Morgan economist Allan Monks said. "A war-time style temporary surge in borrowing is in prospect," said Martin Beck, at Oxford Economics.
On Thursday, the Bank of England announced a 200 billion-pound increase in its bond-buying programme as well as a cut in interest rates to a new all-time low of 0.1%.
Sunak, a 39 year-old former Goldman Sachs analyst who has been in the job for just over a month, said the wages support system would be up and running by the end of April, run for at least three months and be backdated to March 1. Other measures included an extra 7 billion pounds for the welfare system.
The plan was welcomed by Britain's biggest trade union, underscoring how the crisis has forced the ruling Conservative Party to abandon its traditional market-led instincts and put the state at the centre of the economy, at least for now. "People concerned about their jobs and livelihoods will feel hugely reassured today that the chancellor has acted swiftly," said Dave Prentis, general secretary of UNISON.
Adam Marshall, director general of the British Chambers of Commerce, urged the government "to go foot-to-floor" to help firms as soon as possible.
Sunak said a new loan programme for small firms he announced this week would be running by Monday when further measures for the sector would be announced. The loans will be available for 12 months, twice as long as previously planned.