Bank of England raises rates by most since 1995 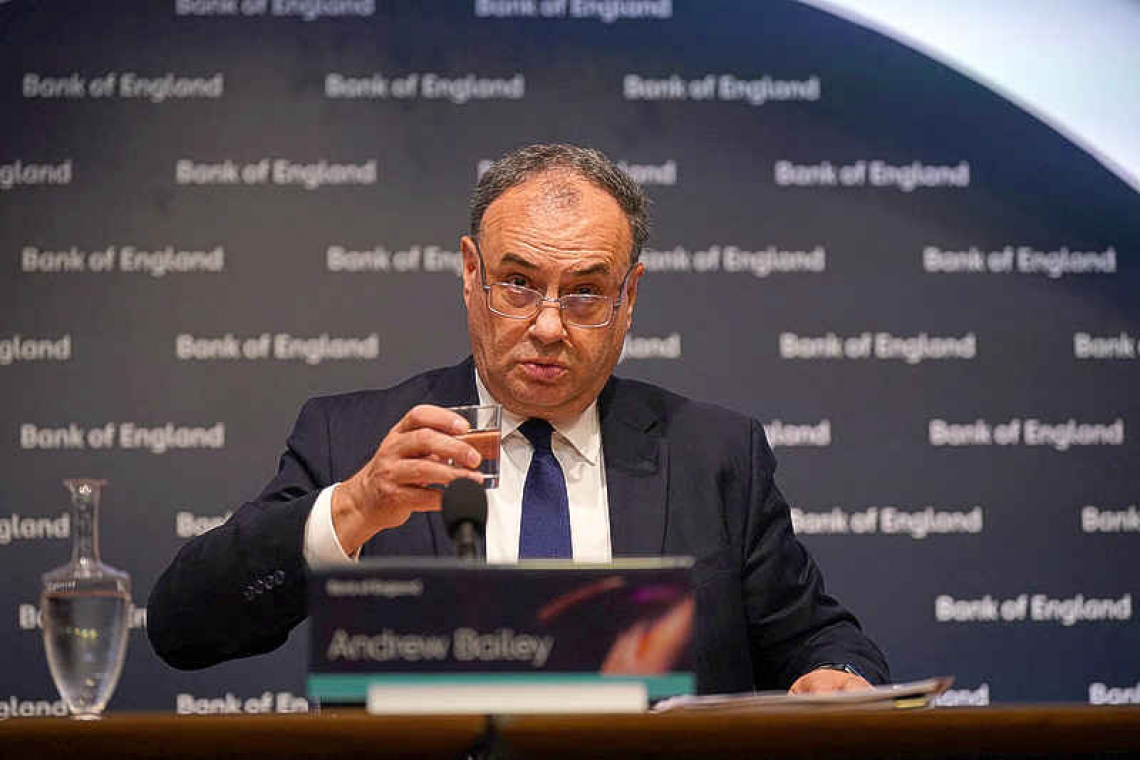 LONDON--The Bank of England raised interest rates by the most in 27 years on Thursday in an attempt to smother surging inflation on track to top 13%, even as it warned a long recession is coming.

Reeling from a surge in energy prices after Russia's invasion of Ukraine, the BoE's rate-setters voted 8-1 for a half percentage-point rise in Bank Rate to 1.75%, its highest since late 2008. The big hike had been expected by most economists in a Reuters poll as central banks around the world scramble to contain soaring prices.
Sterling fell as the BoE said Britain would enter a recession at the end of 2022 and not emerge until early 2024. Governor Andrew Bailey said economic uncertainty was exceptionally large and that all options are open. "Returning inflation to the 2% target remains our absolute priority," he said. "There are no ifs or buts about that."
As well as surging energy costs, Britain is also adjusting to Brexit and a political leadership change. The BoE said Britain was facing its biggest slump in living standards since records began in the 1960s.
On Wednesday, the National Institute of Economic and Social Research, a think tank, said more than a million households would soon have to choose between heating and buying enough food. Bailey said he had "huge sympathy" for households facing rising borrowing costs but "I'm afraid the alternative is even worse, in terms of persistent inflation."
Feedback from business leaders and the BoE's own surveys showed inflation pressure building in the labour market because of a severe shortage of jobs candidates, he said.
The favourite to become the next prime minister, Foreign Secretary Liz Truss, has pledged big tax cuts. Many economists say that would fuel inflation and push up rates further.
Truss also wants to review the BoE's inflation-fighting mandate. Bailey declined to comment on the race for Downing Street, or the criticisms of the BoE from Truss and her supporters. But he noted that British inflation had averaged around 2% over the 25 years since the BoE gained operational independence, "not the case for all central banks, certainly."
Truss responded to the BoE's gloomy forecasts by saying she would immediately announce an emergency tax-and-spending plan if she becomes prime minister.
The BoE said Britain was facing a recession with a peak-to-trough fall in output of 2.1%, similar to a slump in the 1990s but far less than the hits from COVID-19 and the 2008-09 global financial crisis. The new forecast was worse than recent projections by the International Monetary Fund, which has said Britain will have the slowest growth and the highest inflation in 2023 among the world's big developed economies.
The BoE said consumer price inflation was now likely to peak at 13.3% in October - the highest since 1980 - due mostly to the surge in energy prices following Russia's invasion of Ukraine. "The shocks to UK headline inflation just keep coming thick and fast," said Brian Coulton, chief economist of Fitch Ratings "This will probably not be the last 50bps move."
Analysts at Citi, meanwhile, predicted two more 25 basis-point rate hikes and then a cut in a year's time. Investors priced in a 25-basis-point rise in interest rates at the next BoE meeting in September.