US wildfire and heat risks to get new spending 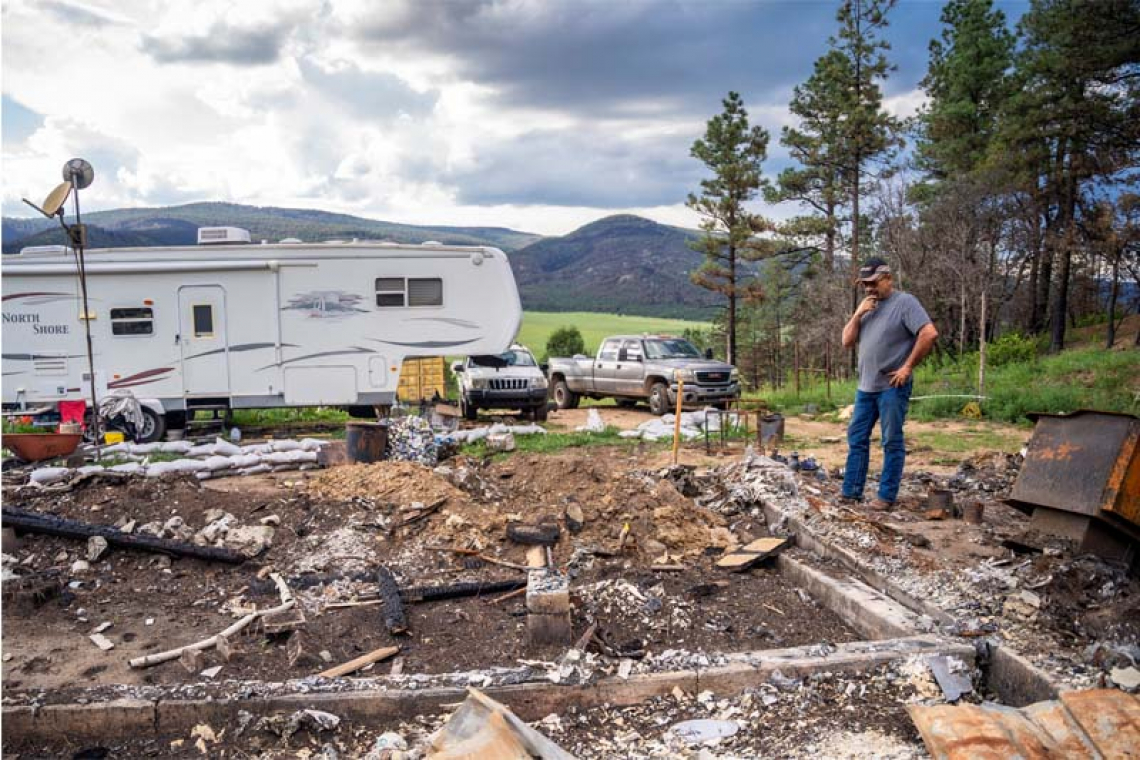 Daniel Encinias stands in the remains of the home he built, which was lost in a wildfire sparked by U.S. Forest Service (USFS) prescribed burns supposed to reduce wildfire risk and which later went out of control, in Tierra Monte, New Mexico, U.S. July 24, 2022.

WASHINGTON--A 700-plus-page "inflation reduction" bill moving through the U.S. Congress would steer significant new funds toward battling wildfires and extreme heat - climate change-related risks that are wreaking havoc across the country this summer.

The legislation, pared down from earlier versions, would direct approximately $370 billion toward a range of climate and energy initiatives, including renewable energy tax credits, backing for electric cars and heat pumps, and environmental justice. If passed - no easy feat given a narrow Democratic majority - the bill would represent a historic level of investment toward reducing fast-growing climate change threats, backers say.
“This is going to, if passed, be the most action the United States has ever taken on climate,” said Christina DeConcini, director of government affairs at the World Resources Institute, a global research group. “Will there be more that we need to do? Absolutely. But this is just so significant and (it's) so important that we get this over the finish line.”
After months of stop-and-start negotiations, Democrats in the U.S. Senate hope to pass the measure as soon as this week, before lawmakers break for their summer vacation. As drought-fueled wildfires spread out of control in the western United States, lawmakers want to direct about $2 billion toward hazardous fuels reduction.
The money in the bill, formally known as the Inflation Reduction Act, could go toward measures like clearing brush through prescribed burns or mechanical thinning so when fires do occur they're not as intense. The funding is a fraction of the forestry money in earlier versions of President Joe Biden’s “Build Back Better” vision – but is nevertheless a massive step forward, said Jad Daley, president and CEO of American Forests, a nonprofit forest conservation group.
Daley estimated the bill contains at least $5 billion for “explicit" forest funding and said prioritized the “clear and present dangers” of wildfires and extreme heat. “We’re ecstatic with where this is,” he said. “We’re still at a game-changing level - we've never had anything close to this level of funding to work with, for example, in wildfire risk reduction or in urban forestry."
Forests are one of the best natural “carbon sinks” – meaning they pull climate-changing carbon dioxide out of the atmosphere as they grow and store it. That means proper forest conservation and restoration efforts – as well as prescribed burns to reduce the risk of the runaway wildfires blazing throughout the western United States and beyond – are critical in the battle to curb global warming.
The bill also earmarks funds to combat increasingly extreme heat as the United States – and much of the world – grapples with record-shattering and increasingly deadly temperatures this year. For example, there is $1.5 billion in grant funding through the U.S. Forest Service for initiatives such as helping cities plant trees, which provide natural cooling and can improve air quality, Daley said.
The bill also includes more than $1.8 billion for a grant programme that could go toward reducing the risks from "urban heat islands", in which concrete-heavy cities trap more heat, pushing up temperatures compared to outlying areas. The heat island effect is a particular risk for poorer inner-city communities who may have little access to green areas or cash to pay for cooling.
As well, the bill contains $3 billion in grants and funding designed in part to cut health risks from urban heat islands, extreme heat, and wildfires. The Department of Transportation and Environmental Protection Agency “really sees the value of trees on the urban heat island and air quality issues that are part of what they’re trying to address,” Daley said.
The bill notably also directs $500 million toward boosting domestic production of clean energy technologies like heat pumps, which provide low-cost, climate-smart heating and cooling, DeConcini said. “All of these kinds of things have shorter-term impacts where an individual can be greater protected from the onslaught of the extreme weather events,” she said.