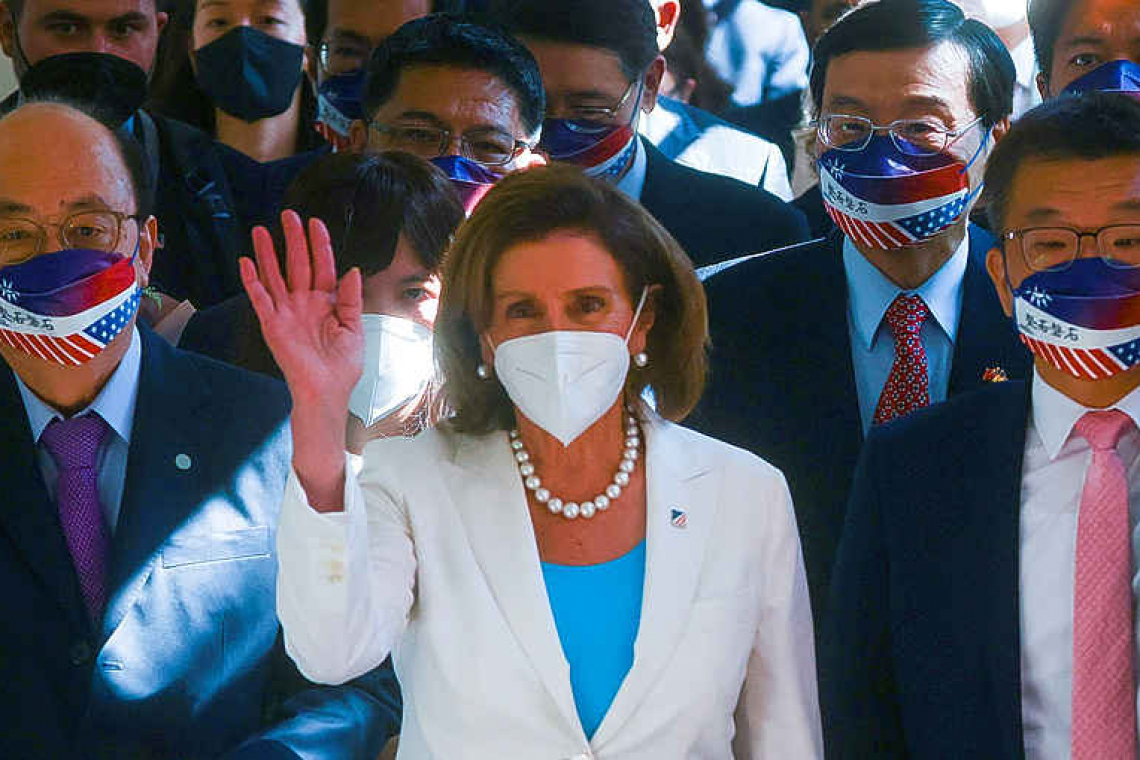 TAIPEI--U.S. House of Representatives Speaker Nancy Pelosi addressed Taiwan's parliament on Wednesday and was due to meet with its president as well as human rights activists during a visit to the island that has infuriated Beijing.

China condemned the highest-level U.S. visit to Taiwan in 25 years as a threat to peace and stability in the Taiwan Strait, responding with a flurry of military exercises, summoning the U.S. ambassador in Beijing, and announcing the suspension of several agricultural imports from Taiwan.
Pelosi arrived in Taipei late on Tuesday on an unannounced but closely watched trip, saying that it shows unwavering U.S. commitment to the self-ruled island that Beijing says is part of China. On Wednesday, Pelosi thanked President Tsai Ing-wen for her leadership, called for increased inter-parliamentary cooperation.
"We commend Taiwan for being one of the freest societies in the world," Pelosi told Taiwan's parliament.
She also said new U.S. legislation aimed at strengthening the American chip industry to compete with China "offers greater opportunity for US-Taiwan economic cooperation."
While Pelosi is not the first House Speaker to go to Taiwan - Newt Gingrich visited in 1997 - her visit comes as relations between Beijing and Washington have deteriorated sharply, and with China a much more powerful economic, military and geopolitical force than it was a quarter century ago. China considers Taiwan part of its territory and has never renounced using force to bring it under its control. The United States warned China against using the visit as a pretext for military action against Taiwan.
Early on Wednesday, China's customs department announced a suspension of imports of citrus fruits, chilled white striped hairtail and frozen horse mackerel from Taiwan, while its commerce ministry suspended export of natural sand to Taiwan.
A long-time China critic, especially on human rights, Pelosi was set to meet later on Wednesday with a former Tiananman activist, a Hong Kong bookseller who had been detained by China and a Taiwanese activist recently released by China, people familiar with the matter said.
Shortly after Pelosi's arrival, China's military announced joint air and sea drills near Taiwan and test launches of conventional missiles in the sea east of Taiwan, with Chinese state news agency Xinhua describing live-fire drills and other exercises around Taiwan from Thursday to Sunday. China's foreign ministry said Pelosi's visit seriously damages peace and stability in the Taiwan Strait, "has a severe impact on the political foundation of China-U.S. relations, and seriously infringes upon China's sovereignty and territorial integrity."
Before Pelosi's arrival on Tuesday, Chinese warplanes buzzed the line dividing the Taiwan Strait. The Chinese military said it was on high alert and will launch "targeted military operations" in response to Pelosi's visit.
White House national security spokesman John Kirby said on Tuesday after Pelosi's arrival that the United States "is not going to be intimidated" by China's threats or bellicose rhetoric and that there is no reason her visit should precipitate a crisis or conflict. "We will continue to support Taiwan, defend a free and open Indo-Pacific and seek to maintain communication with Beijing," Kirby told a later White House briefing, adding that the United States "will not engage in sabre-rattling."
Kirby said China might engage in "economic coercion" toward Taiwan, adding that the impact on American-Chinese relations will depend on Beijing's actions in the coming days and weeks.