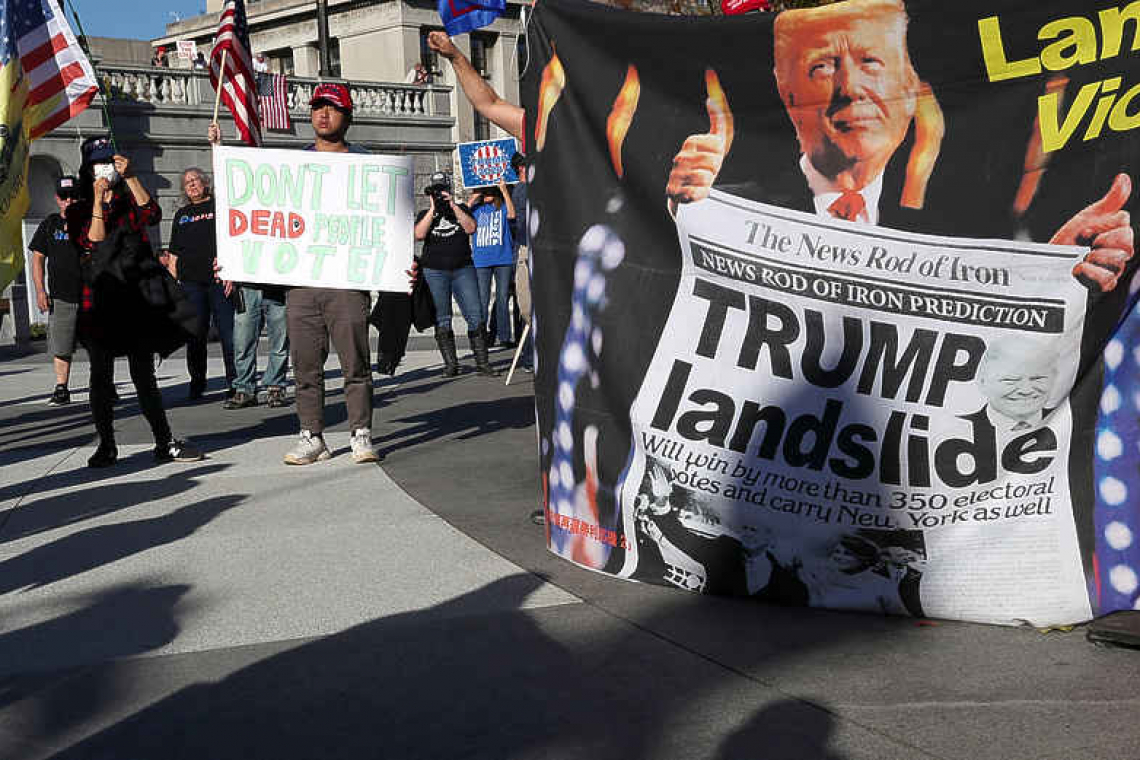 WILLIAMSPORT--A judge on Tuesday appeared skeptical of President Donald Trump's request to block officials from certifying President-elect Joe Biden's victory in Pennsylvania, underscoring the difficulties the Trump campaign has faced in challenging the outcome of the U.S. election.

During a hearing, U.S. District Judge Matthew Brann in Williamsport, Pennsylvania, said halting certification would effectively disenfranchise all voters in the state. "At bottom, you are asking this court to invalidate 6.8 million votes, thereby disenfranchising every single voter in the Commonwealth," Brann said. "Can you tell me how this result can possibly be justified?"
The judge indicated he would not immediately rule on the case, requesting written filings from the parties that are due in coming days.
Trump lawyer Rudy Giuliani said during the hearing that there was "widespread, nationwide voter fraud" in the Nov. 3 election, as the Republican president also has claimed, but offered no evidence.
Mark Aronchick, a lawyer representing several Pennsylvania counties in the lawsuit, said the former New York mayor was living in a fantasy world. "Dismiss this case so we can move on to the real business of this country," Aronchick told Brann. "Let's end this."
The lawsuit is one of many the Trump campaign has filed in key states where he lost, aimed at contesting Biden's victory. Judges have already tossed lawsuits in Michigan and Georgia, and a loss in the Pennsylvania case would likely doom Trump's already remote prospects of altering the election's outcome.
A senior Biden legal adviser has called the litigation "theatrics, not really lawsuits."
The Pennsylvania lawsuit initially included claims that Republican observers were denied access to ballot counting. But Trump's campaign on Sunday narrowed it to focus on an allegation that some voters were improperly allowed to fix ballots that had been rejected due to technical errors such as missing an inner "secrecy envelope."
Pennsylvania Secretary of State Kathy Boockvar is due to certify the election results next Monday.
During the hearing, Giuliani, a former senior federal prosecutor who has not been a courtroom regular for decades, made sweeping claims despite the campaign's earlier narrowing of the case.
Trump, the first U.S. president to lose a re-election bid since 1992, has called the election "rigged" and has falsely claimed victory. State election officials across the country have said they have found no evidence of the fraud that Trump claims.
Trump's campaign said Democratic-leaning counties in Pennsylvania unlawfully identified mail-in ballots before Election Day that had defects so that voters could fix, or "cure" them. Pennsylvania officials said all of the state's counties were permitted to inform residents if their mail-in ballots were deficient, even if it was not mandatory for them to do so.
At the hearing, Daniel Donovan, a lawyer for Pennsylvania's top election official, called the state's handling of the election during the coronavirus pandemic a success and said Trump's campaign was asking a federal court to "micromanage" routine differences in county practices.
Biden, due to take office on Jan. 20, is projected to have won Pennsylvania by more than 70,000 votes, giving him 49.9% of the state's votes to 48.8% for Trump. Biden clinched the U.S. election by winning Pennsylvania to put him over the 270 state-by-state electoral votes needed. Biden, a Democrat, won 306 Electoral College votes to Trump's 232.
The Trump campaign has had difficulty retaining legal counsel to take on its post-election challenges including the Pennsylvania case. On Monday, three lawyers representing the campaign asked to withdraw from the case, saying the campaign consented to the move, but offering little explanation. Brann allowed two of the three to drop out.
As the hearing unfolded on Tuesday, Pennsylvania's highest state court ruled in a separate lawsuit that the elections board in Philadelphia, the state's largest city, acted reasonably in keeping Trump campaign observers behind barricades and 15 feet (4.5 m) away from counting tables, rejecting an appeal from Trump's campaign.