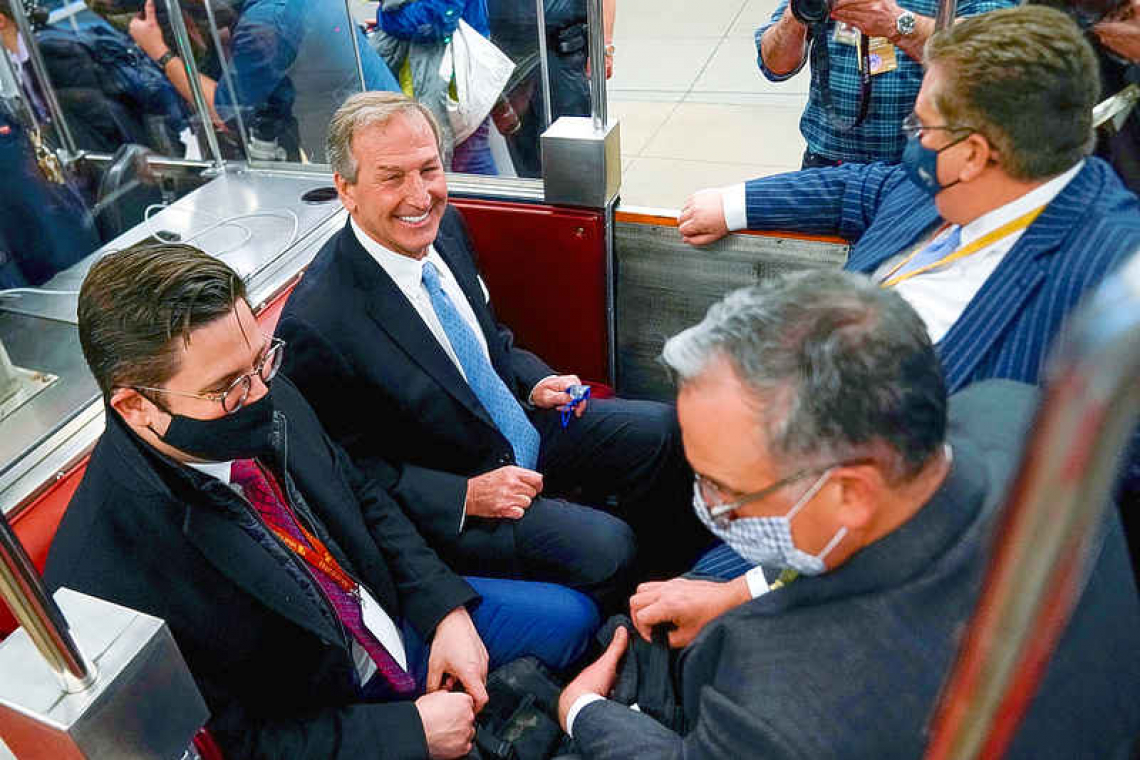 Attorney Michael van der Veen, lawyer for former U.S. President Donald Trump, smiles after speaking to members of the media after the Senate voted to acquit former President Trump during his impeachment trial in Washington, U.S. on Saturday.

The vote by 43 of the 50 Republican senators to acquit Trump on the charge of inciting last month's deadly riot at the U.S. Capitol, with only seven voting for conviction, highlights just how powerful a grip he has on the party he remade in his image over the past five years. The former president, who has largely stayed out of sight at his Florida home since leaving the White House on Jan. 20, commands fervent loyalty among his supporters, forcing most Republican politicians to pledge their fealty and fear his wrath.
But after two impeachments, months of false claims that his election loss to Democrat Joe Biden was rigged, and an assault on the U.S. Capitol by his supporters that left five people dead, Trump is also political poison in many of the swing districts that often decide American elections. That leaves Republicans in a precarious position as they try to forge a winning coalition in the 2022 elections for control of Congress and a 2024 White House race that might include Trump as a candidate.
"It's hard to imagine Republicans winning national elections without Trump supporters anytime soon," said Alex Conant, a Republican strategist and aide to Senator Marco Rubio during his 2016 presidential primary race against Trump.
"The party is facing a real Catch 22: it can't win with Trump but it's obvious it can't win without him either," he said.
Trump has not signalled his long-range political plans for after the trial, although he has publicly hinted at another run for the White House and he is reportedly keen to help primary challengers to Republicans in Congress who voted to impeach or convict him.
"Whether he does run again is up to him, but he's still going to have an enormous amount of influence on both the direction of the policy and also in evaluating who is a serious standard-bearer for that message," one adviser said. "You can call it a kingmaker or whatever you want to call it."
Trump has maintained strong support from Republicans in polls even since the Jan. 6 attack on the Capitol. Just days after the riot, a Reuters/Ipsos poll found 70% of Republicans still approved of Trump's job performance, and a later poll found a similar percentage believed he should be allowed to run for office again.
But outside his party he is unpopular. A new Ipsos poll published on Saturday showed that 71% of Americans believed Trump was at least partially responsible for starting the assault on the Capitol. Fifty percent believed he should be convicted in the Senate with 38% opposed and 12% unsure.
Trump's defenders in the Senate argued that the trial was unconstitutional because Trump had already left office and that his remarks ahead of the riot were protected by the constitutional right to free speech. But a majority of senators including seven Republicans rejected that view.
Democrats said many Republican senators were afraid to vote with their conscience to convict Trump out of fear of retribution from his supporters. "If this vote was taken in secret, there would be a conviction," Democratic Senator Richard Blumenthal said.
Senate Minority Leader Mitch McConnell was among the Republicans who voted to acquit Trump on Saturday, though he later slammed the former president as "practically and morally responsible" for provoking the violence. His position illustrated how some Republican leaders are trying to distance themselves from Trump and limit his influence without triggering the full-blown fury of Trump and his supporters.
McConnell's words will not help the Republican party in the 2022 mid-term congressional elections, Trump ally Senator Lindsey Graham, who wants to unite the party under Trump's banner, said on Sunday. "I think Senator McConnell's speech, he got a load off his chest obviously, but unfortunately he put a load on the back of Republicans," Graham told Fox News Sunday. Republican candidates in 2022 will inevitably be asked what they thought of McConnell's denunciation of Trump's actions, Graham said.
But Maryland Governor Larry Hogan, a moderate Republican, said there will be a big fight for the soul of the party. "I think we've got to move on from the cult of Donald Trump and return to the basic principles that the party's always stood for," Hogan told NBC's "Meet the Press".